Hate on a Dinner Plate 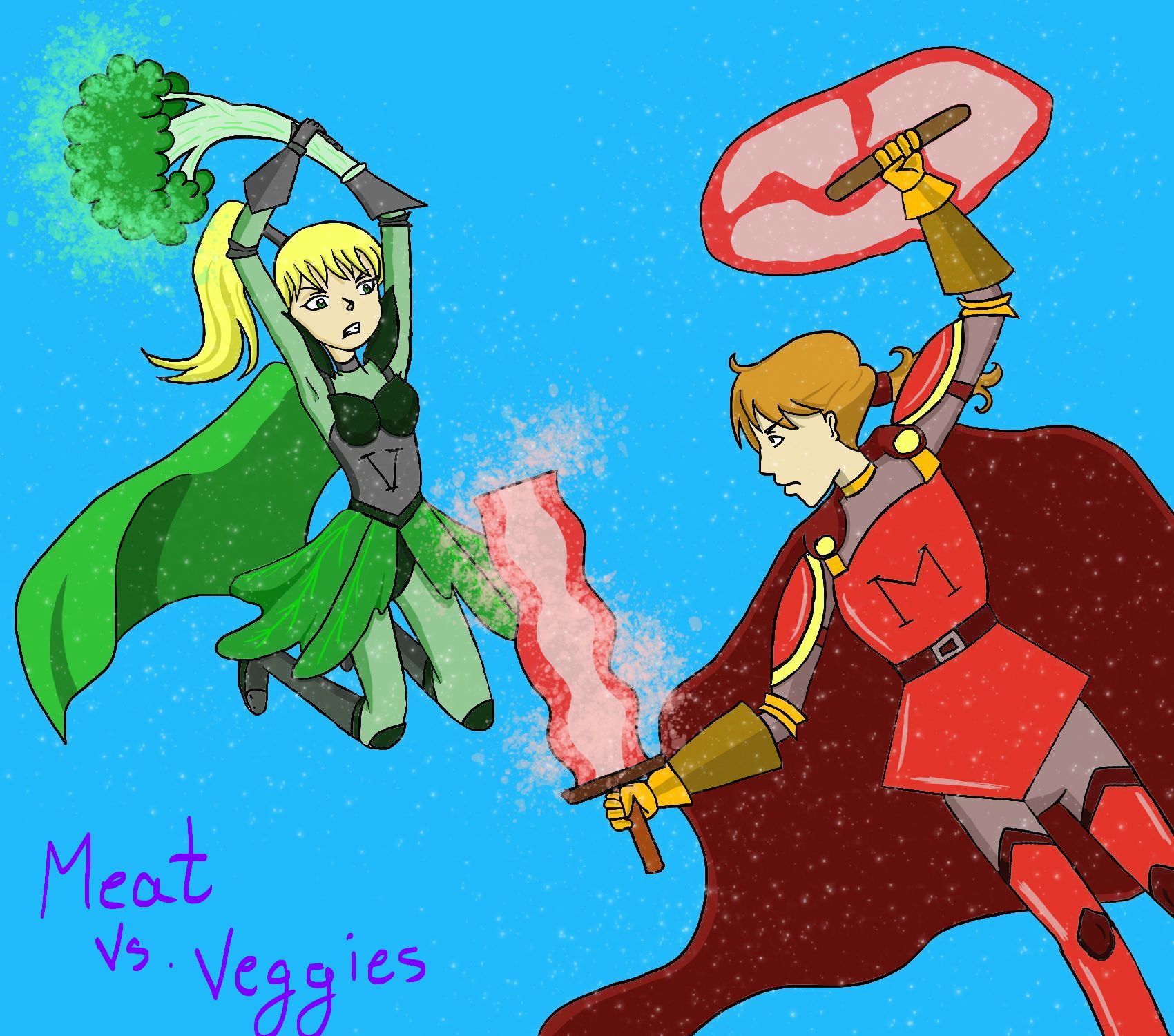 There seem to be no limitations on hate speech when it comes to food. Carnivores and vegans are so vitriolic toward each other on social media that vegetarians like me can get caught in the crossfire. Vegetarians are no more welcomed in the vegan community than in the larger meat eater’s society.

In an attempt to bridge this gap between vegans and meat eaters, let’s explore why vegans and carnivores can’t seem to get along.

First, I have to ask, what is the deal with bacon? Meat eaters love bacon. There is bacon everything! Bacon burgers, bacon salads, bacon sandwiches, bacon mayo, bacon cheddar, bacon socks, bacon ties, bacon air freshener, and I even saw a roll of bacon printed toilet paper! Do people really love bacon so much that they need to wipe their outgoing bacon with pictures of bacon? I am not saying anyone can’t eat bacon. Eat bacon until your arteries burst. Just stop beating your chest about it.

Carnivores seem to love meat so much that one type of meat is never enough. Meat eaters love to tower meat on top of each other. It is not unusual to see a cheese and chicken stuffed hamburger topped with a half-pound of bacon. There are even sandwiches that use meat as the buns with more meat inside, and of course some BACON!

Putting meat on top of meat is hardly enough though for the true meatheads. Last Thanksgiving, I heard a story of a “diabetic hillbilly”—his words for himself—who took a chicken, lubed it up with pig grease and shoved it up a duck’s ass and then took the two assaulted birds and greased them with pig fat and shoved them up a turkey’s ass! A Turducken was born, and, almost certainly, a whole mess of heart disease with it.

Carnivores also have a nasty habit of verbally assaulting anyone that does not partake in the ritualistic devouring of animals. When a Detroit area chef announced the first “meatless” coney dog for sale in Detroit last spring, the internet backlash was equal parts hilarious and terrifying. The chef was told to vacate his man card, to leave Detroit, that he was an anti-American terrorist hell bent on destroying the American way of life one meatless, onion-and-mustard covered chili dog at a time, and even threats of physical violence were sprinkled throughout the comment section of The Freep’s Facebook article post.

I ask carnivores to consider that just because a few people choose not to eat meat, it does not mean that they are going to come in the night and steal away your ribeyes and rump roast. They aren’t going to lure your children away from you with tales of the dangers of meat. Relax, eat your many varieties of animals and live and let live. Try this advice on for size and quickly realize how much better your Turduckin will taste when you don’t give a shit what your neighbor is eating.

What about vegans? For some who are not part of the tribe, vegans can seem like the Masters of Morality, the Lords of Lactose Intolerance, and The Deities of Dieting Responsibly.

Here is a sample conversation that I actually had with a vegan that may help explain why these monikers seem applicable. After I expressed to a house guest that I was thinking of painting one of my walls red, I was informed why that might not be the best color: “Oh, you think that wall should be painted red? I like red. Besides for the disgusting red color of blood from all the dead animals being sacrificed every day for the glutinous meat addicted society. That’s why I am a vegan.”

There may be other reasons for why vegans get a bad rap. Never ask vegans why they have chosen that path unless you want graphic details about every food service industry and slaughterhouse documentary they have ever seen.

To help bridge the gap between vegans and carnivores, I say let’s thank vegans for helping save the world one meat and dairy-less meal at a time. We should respect vegans. However, maybe vegans can consider that just because they have chosen to sacrifice for the betterment of society, the rest of us do not have to. Being a vegan does not have to mean sharing constant disapproval with everyone because of their food choices.

Maybe we can all agree that too much is too much. Maybe vegans could do a little more sharing of tasty recipes and less sharing of graphic slaughterhouse videos. Maybe meat eaters will learn to cut some meat out of their diet, if not for the environment than for themselves, and, for goodness sakes, maybe they can stop wearing bacon-themed pajama bottoms in public.