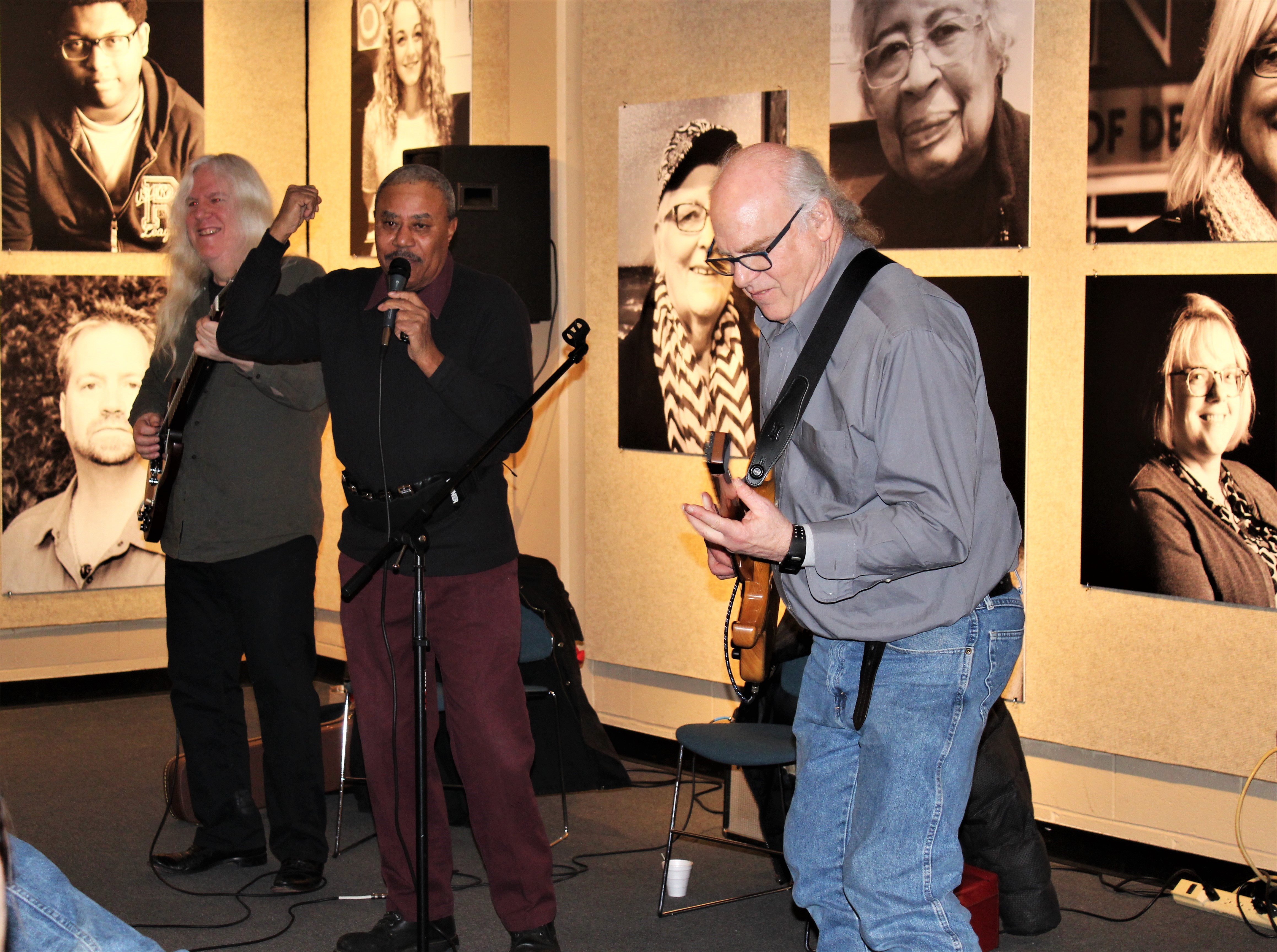 “We Are Dearborn” fills the Sisson Art Gallery at Henry Ford College, with 42 striking, 3-4 ft. black and white photographic images. The large scale portraits can be seen through the gallery’s glass, each a halting countenance as you walk through the halls of the MacKenzie Fine Arts building. Faces of HFC students, teachers, Dearborn residents and employees gaze back at the viewer, refusing to go unnoticed. Color is transformed to shade variances of a monochromatic scale. A melting pot of gender, age and ethnicity.

“I wanted as you come in, that you are confronted by these,” director of exhibitions Steve Glazer says about the images. “They’re in your face.” He explains that though he appreciates exhibits that draw the viewer in close, he also loves the wow factor and finds that when you are in an academic environment, you often have to confront your audience to get their full attention.

“We Are Dearborn” was inspired by a larger, global project called InsideOut, an initiative put forth by French artist JR, who in 2011, won the TED Prize, an award given annually to an individual who is “able to capture the imagination while making a meaningful impact, both a dreamer and a doer.” Using simple materials of camera, ink, paper and glue, JR and his team engage with communities to create socially significant art through photo portraits, telling stories of those who live or have died there. From the bourgeois districts of Paris, to the major cities of Israel and Palestine, from the rooftops of Kenya to the favelas, or slums of Rio, JR’s art highlights and honors those marginalized and misunderstood, some victims of poverty or violence. With the TED Prize, JR launched the global participatory art project InsideOut in which he continues to compel and aid others in their own efforts to use photographic art to evoke social change.

“I thought it was a positive thing, so simple,” says EmmaJean Woodyard, director of the Dearborn Community Fund, a local organization committed to supporting the city of Dearborn through arts, recreation and cultural projects. “We didn’t produce the same idea, but that was the germ of our idea, it was what spurred it.”

“We Are Dearborn” began as part of last spring’s Arts Dearborn, a month long celebration of the city’s rich cultural landscape coordinated by the DCF. Woodyard helped organize the display of 23 large scale photographs of Dearborn residents taken by two local photographers as well as students of the SURA Arts Academy, a photography art program supported by the Arab American National Museum. The word SURA means photograph in Arabic. The larger than life images were hung facing out of the windows of two vacant office buildings located in East and West Dearborn as if to say, “This is us. We Are Dearborn.”

“Dearborn doesn’t always get a good rap,” says Woodyard in regard to the city’s image in the press. “This was our humble beginning, a first attempt. Just look at the faces that live here.”

“When a photo is that big,” she adds, “You’re often drawn to the eyes. You look at the photo and think, what a beautiful person. This was a photo exhibit highlighting our diverse community.”

For years Dearborn has come under attack of politicians and fake news sites claiming that the city is under Sharia law. Though the community is richly diverse in its scope of races, ethnicities, and religious beliefs, it often falls under harsh generalizations and misconceptions due to its large Arab-American population. Glazer and Woodyard are hoping this exhibit and its events will broaden the perception of the city and strengthen the unity at Henry Ford College.

The Sisson Gallery exhibit contains a selection of the photographs stored from the city initiative but adds many of its own, almost doubling the original collection. The polished additions were the result of an open portrait studio held on campus last fall by HFC instructor, Karen Larson-Voltz and her Art 150 - Introduction to Digital Photography class.

The exhibit is subtitled: “A community discourse on what it means to live, work, attend school in, or visit Dearborn featuring 42 large photographic portraits.” Unlike past exhibits in the gallery, the subjects of the portraits are not labeled nor are the photographers credited. This is to further a sense of oneness, many pieces forming a whole.

“To label each portrait would give each person an individual identity,” Glazer explains. “To label who took each image could put a stamp of ownership on the groups who took part in creating these photographs. As curator of this exhibition, I did not want either of these to get in the way of a viewer seeing these people as ‘the people’ of Dearborn. Consequently, there are no identification cards accompanying the exhibited work.”

To the furtherment of an inclusive theme, Glazer has started a wall of selfies within the exhibit which he hopes will inspire students and guests to become a part of the digital fabric weaved here. He is also hoping to use the space to draw people together for various happenings during the span of the exhibit. “I want this to be a community discourse,” he says. “Contrary to some of the things that you hear, WE are Dearborn.”

A kickoff off event was held on Monday, Feb. 5, when longtime Dearborn resident Howard Glazer, with his bandmate Harmonica Shaw, joined his brother Steve in the Sisson Gallery to turn up the noise. Students, faculty, and guests filled the room and overflowed into the hallway in order to hear the Blues Hall of Fame duo and art instructor’s 90-minute jam session. For many HFC students, it was an introduction into the art of blues, though not for art student Mram Aboluhoom who enjoys catching local jazz and blues where she can. As for the Glazer boys and Harmonica Shaw she says, “They were spectacular.”

“We Are Dearborn” is open to the public Monday - Thursday 9:00 a.m. - 6:30 p.m. through March 18. As events are scheduled, they will appear on the website at: sisson.hfcc.edu If you’d like to become a part of the exhibit, please email selfies to: wearedearbornexhibit@outlook.com