Roller Derby Redefines What it Means to Be an Athlete 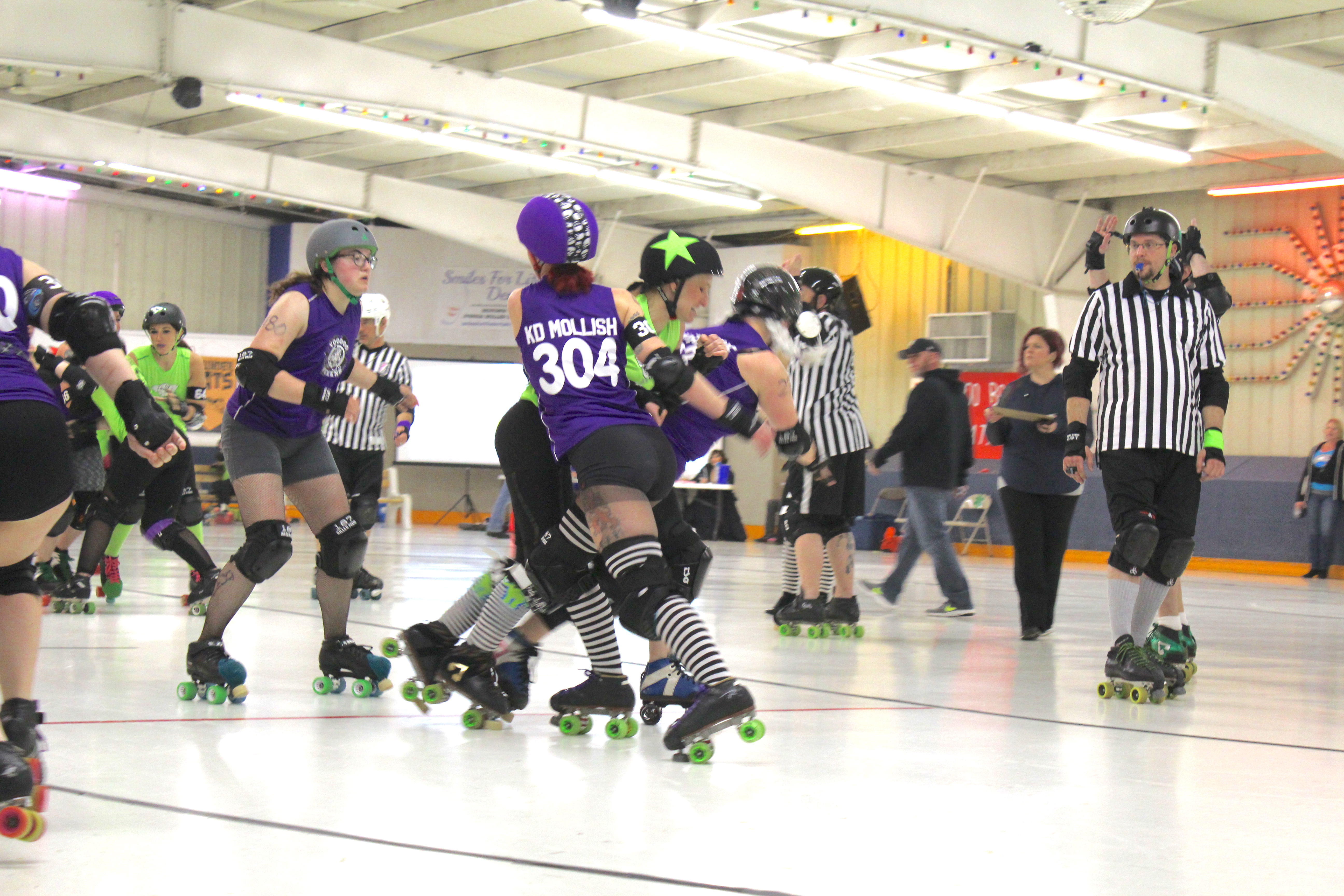 Henry Ford College English instructor and roller derby athlete, Chelsea Lonsdale, says that it was the diversity of players in roller derby that first attracted her to the sport: “I liked that derby included all kinds of women, all ages and sizes and backgrounds and interests,” she says. Lonsdale got her start in 2015 with Floral City Roller Girls — a Michigan Roller Derby League team based in Monroe. Shortly thereafter, Lonsdale ended up transferring to the Downriver Roller Dolls, a team based in Woodhaven, where she played for one of their travel teams, Downriver Muscle, and a home team, the Blue Collar Betties. It is common for roller derby leagues to have multiple teams – several home teams, which play against each other, and at least one travel team, which competes against other national teams. “To me, roller derby means strength, athleticism, dedication, encouragement, and family,” Lonsdale says. Currently, she plays with the Ypsilanti Vigilantes, an Ann Arbor Derby Dimes travel team, under the name “Charlie Defiant.”

The game of roller derby is often thought of as violent – and it is, to an extent. There are definitely legal hits, using hips and shoulders. However, there are often discrepancies in the media’s depiction of the sport. The 2009 film, “Whip It,” starring Ellen Page, depicts an older style of derby, making use of elbows and even a banked track. The use of elbows in modern roller derby would cause an immediate penalty, or even an expulsion.

Roller derby can be a fairly confusing game if you’re not familiar with it. Two teams battle in an hour-long bout. The game is split into two 30-minute periods. Each game is comprised of several “jams,” which is a play that can last up to two minutes, after which players can switch out. Five skaters typically start on the track, one of whom is the “jammer,” with a star on her helmet, and the other four are “blockers.” One of the blockers is a “pivot,” who can take over for the jammer at any time by taking their helmet cover. The jammer is the only player who can score points, by passing each blocker on the track. Blockers typically form “walls,” where they stick close together in order to keep the jammer from passing.

Whichever jammer gets through the blockers first is the “lead” jammer, and can “call off” the jam at any time by signaling to the referees.

In her article, “The Man Who Got Roller Derby Rolling Along,” Cecilia Rasmussen of the LA Times credits the start of roller derby to Leo Seltzer, who, in 1935, realizing the popularity of roller skating, decided to hold marathon races in which skaters would lap 64,000 times around a banked track over six weeks. Eventually, Seltzer partnered with Damon Runyon, who added more physical contact to the sport. Derby started to gain more traction in 1948 when it made its television debut. It peaked at five million viewers in 1969 but began to fizzle out as TV markets faded and travel became more expensive. The game has had a more modern resurgence with a stronger focus placed on athlete-run leagues, beginning in the early 2000s with the Texas Rollergirls. The Women’s Flat Track Derby Association, the international governing body for the sport, began in 2004 as the United Leagues Coalition. The following year, representatives from 20 flat-track teams met at WFTDA’s first meeting. Today, there are more than 400 teams registered with WFTDA, and more than 50 apprentice leagues. WFTDA hosts playoffs throughout the year, ending with the championships in November. The location of the championships changes yearly — last year it was held in Philadelphia, where the Melbourne, Australia team, Victorian Roller Derby, took first place.

Since roller derby is primarily a women-only sport, it has been a wonderful place for women to make long-lasting friendships: “I love watching strong women play against one another, hit hard, and then hug in the middle of the track,” Lonsdale says “Roller derby also connects me with a group of like-minded people that I might have otherwise never met, and I really appreciate the friendships I’ve made with league mates over the last few years.”

Though the game can be physically demanding, it can be rewarding, as well. “Personally, what I love most is being in my own body and seeing what I’m capable of,” Lonsdale says, “Whether it’s pushing through a tough wall, skating laps, or managing my mental health so that I can give my best during a practice or a bout, I think I’ve come to understand myself more through this sport.”

Those interested in joining a team can email the Downriver Roller Dolls (info.downriverollerdollz@gmail.com), Detroit Roller Derby