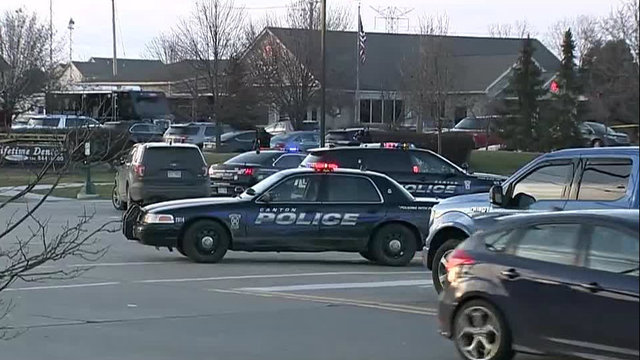 On Jan. 25, local law enforcement stopped an attempted armed bank robbery at the Citizens Bank on Canton Center Road in Canton Township. Devin Rodriguez sealed himself inside the Citizens Bank, taking two employees and one customer hostage. As reported by Darrell Clem of Hometown Life, police were alerted to the robbery after a teller had triggered the silent alarm while entering the bank vault.

Local, state and federal authorities arrived on scene, and proceeded to close down Canton Center Road. Kristina Wilson, owner of Sweetwaters Coffee and Tea, located in the plaza across the street from the Citizens Bank, was one of many to witness the event as it unfolded.

Wilson said, “You could see all the police cars coming from the station and they blocked off the road. We assumed it had something to do with a robbery, just from how many cars were there.”

After police arrived, Wilson and her staff and several customers in her cafe were told by officers to move towards the back of the store and lock the doors for safety. At around 7:00 p.m. law enforcement made the decision to evacuate the entire plaza. Officers offered to escort patrons out of the cafe and to their cars.

The four-hour standoff concluded with Rodriguez releasing the hostages, dropping his weapon and surrendering to police.

Despite the commotion and confusion the event caused, Wilson does not think this incident is indicative of a changing trend in Canton. “I think in this day and age things can happen anywhere. It didn’t make me rethink the safety of our business here,” she said. “We do have emergency plans in our policy of what to do when things like this happen, so from that standpoint I think we were well prepared,” Wilson added.

Mariah Cornell, an employee at the Dairy Queen in the same plaza who was able to witness the hostages as they exited the bank, reflected the same sentiment. When asked if she felt nervous about the incident, Cornell responded, “No, with all the police around, I felt pretty safe over here.”

After his arrest, law enforcement was able to connect Rodriguez to the robbery of the Huntington Bank on Michigan Avenue in Canton, which took place a week prior. Rodriguez is now in police custody awaiting trial, after being indicted on five counts, including putting the life of another in jeopardy, and two separate counts of armed robbery.