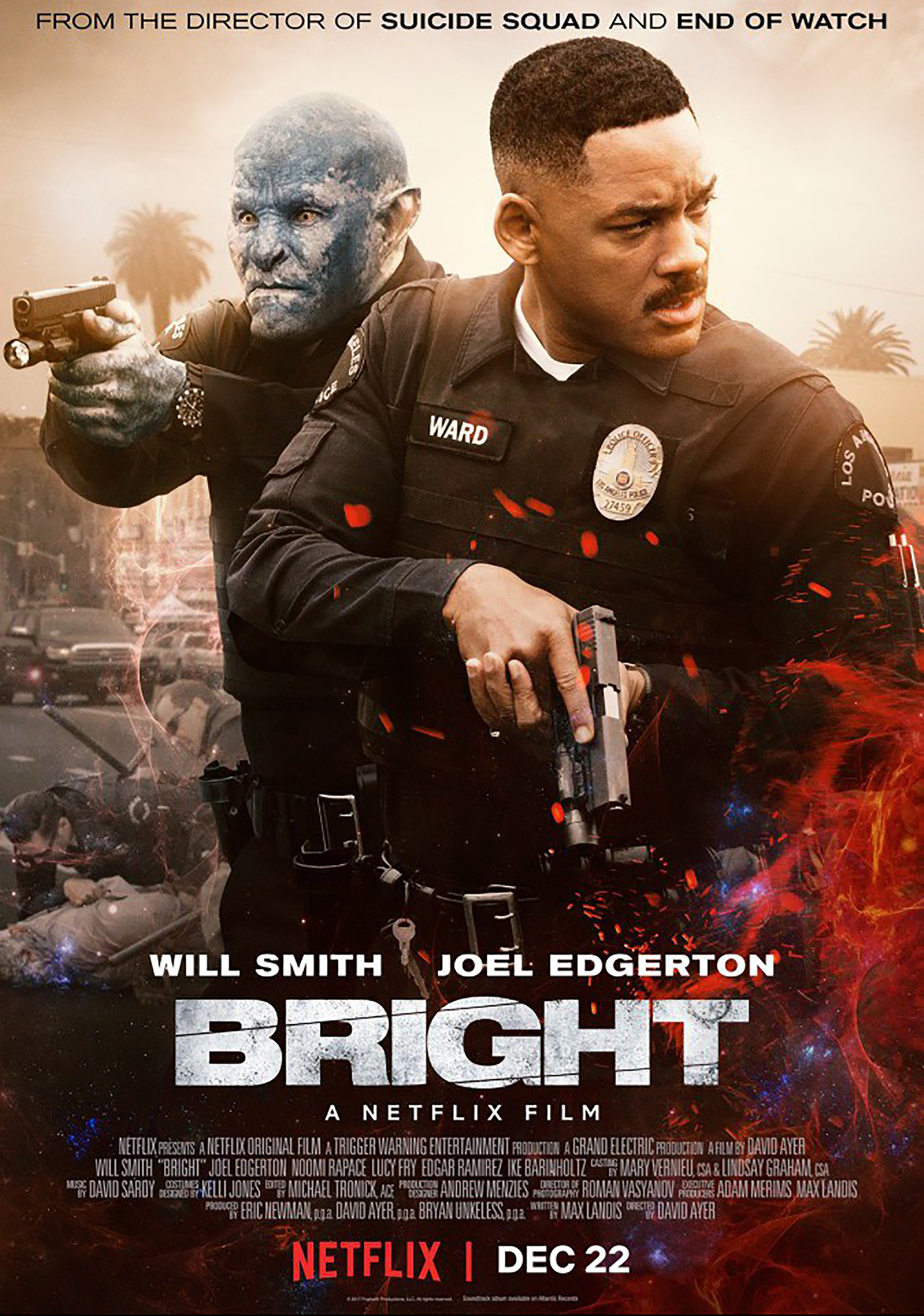 The Netflix original film “Bright,” directed by David Ayer, stars Will Smith and Joel Edgerton. In the first three days of its release in the U.S. last December just before the holidays, there were over 11 million TV streams.

“Bright” is a cross-genre multi-themed production set in an alternate reality where elves, humans, orcs, fairies and other fantastical creatures co-exist in modern day Los Angeles. Punctuated with a fair amount of action and humor, the film juxtaposes hard-hitting cop drama and cult fantasy against contemporary social issues. A cross between box office hits Training Day (written by David Ayer), Lord of the Rings, Harry Potter, and District 9, a sci-fi film innovative in its use of documentary style narrative, “Bright” revisits themes like corruption in the LAPD and interspecies relations in a dystopian world.

Bright presents a world where social classes are stratified by species. Elves are the upper class. They live in opulence and occupy the upper echelons of society. Humans are the working class. They are certainly beneath the elves, but only slightly above the orcs even though some of them are on the same plane as orcs. Orcs are the lower class. They eke out a living in the downtrodden parts of the city. Most of them are criminals and gangbangers. Fairies, though they only play a small role at the beginning and end of the film, are the undesirables. They are the dregs of society, reviled and swatted away as nuisances. Other creatures also exist but it is unclear how they fit into the social hierarchy.

Will Smith’s character, Scott Ward, is a human police officer who has recently returned to the force after surviving a shooting. Joel Edgerton plays Nick Jacoby, the first orc police officer in the LAPD. Ward and Jacoby are partners, but their relationship is strained by their differences.

Ward and Jacoby respond to a seemingly standard emergency call in a bad neighborhood and are soon plunged into a battle over a magic wand, the most powerful object in the world.

Ward and Jacoby must protect Tikka, a young elf in possession of the wand and keep the wand out of the wrong hands until the U.S. Department of Magic’s Magic Force arrives to take custody of it. They are targeted by Leilah, a rogue elf seeking the wand in order to resurrect the Dark Lord; a squad of crooked bigoted cops who want to rid the department of Jacoby the orc officer and keep the wand for themselves; Poison, leader of a human gang in whose turf the wand was discovered; and Dorghu, the leader of an orc gang who ostracizes Jacoby as a traitor to his own kind.

Tikka and Lailah are Brights, beings with magic who can hold the wand with their bare hands without blowing up into pieces. Unbeknownst to him, fulfilling a rather vaguely referred to prophecy, Ward is also a Bright.

As polarizing as Suicide Squad was (which was directed by Ayers and also starred Will Smith), “Bright” pits Hollywood critics and general viewers on opposite ends of the review spectrum. Rotten Tomatoes gives it 27 percent positive reviews from critics, and 86 percent positive reviews from the public. The consensus for the critics is that the film falls painfully short of effectively blending fantasy, hard-hitting cop drama and social commentary.

Watching “Bright” for the first time, one might argue that this consensus is justifiable. As humorously entertaining as it is, at times, you can almost imagine three separate films haphazardly sewn together. Some of the elements of the world created have no actual bearing on the central story, there is no backstory as to how the different species came to co-exist, and there are a few other holes in the plot that need filling.

A backstory posted on the film’s official Instagram page a few days after “Bright” premiered, however, sheds light on elements like how the wand came into existence, who the Dark Lord was, who the first Bright was, and why the U.S. Department of Magic’s Magic Force was instituted. The film makes much more sense when you watch informed with this backstory.

Netflix confirmed that a second “Bright” film is already in the works. Whether or not viewers will go through the effort to find the backstory to be able to truly appreciate it may shed light on whether this formula for films has a future.