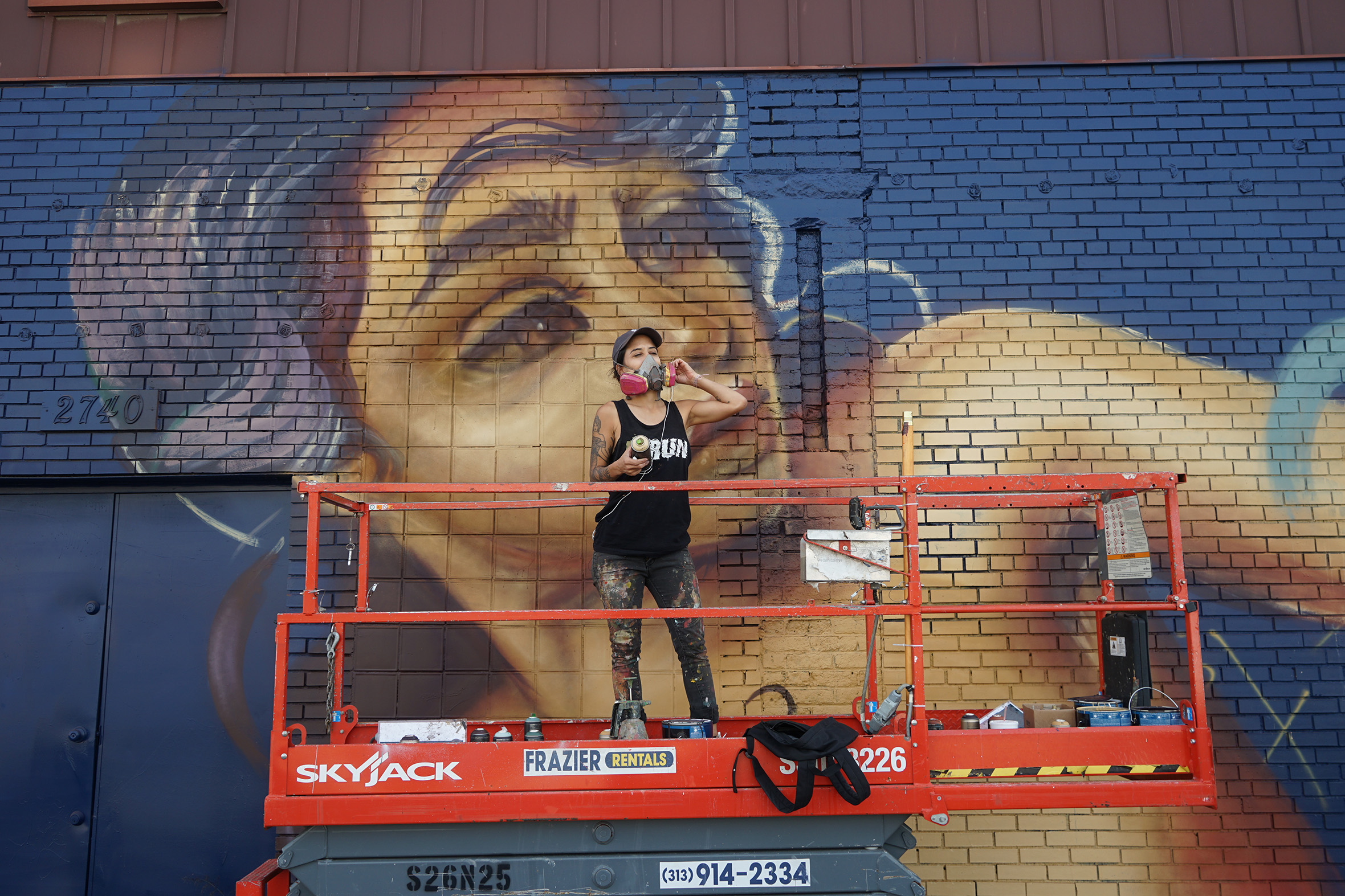 How did a small fine art print company become the organizer of Detroit’s largest mural festival? 1xRUN was established in 2010 by co-founder and CEO, Jesse Cory, along with Dan Armand and Ryan Brogan. Originally a side project inside their art gallery in Royal Oak, 1xRUN created software that could connect buyers with fine art print editions. The business took off, and Cory and his partners were able to make 1xRun their full-time jobs, and the company now has 18 full-time employees.

Since moving to Detroit in 2012, 1xRUN has become one of the world’s leading curators of fine art editions. Cory explains, “We curate, manufacture, sell and distribute fine art prints, and we ship to over 100 different countries. We have over 50,000 customers across the world.”

1xRun made the leap from a small gallery curating fine prints to organizing Murals in the Market. “Naturally many of our artists come from a graffiti movement or some sort of rebellious counter-culture movement,” said Cory. “We [had artists paint] murals on our gallery in Royal Oak starting in 2009-2010. We would paint the wall every summer with a new artist and when we moved to the Eastern Market [District] we had artists that were coming in from our studio across the world. And so we started painting murals in Eastern Market and then we were sponsoring mural festivals. We were sponsoring a mural festival called POW! WOW! We sponsored mural festivals in Mexico, Japan, Taiwan, Hawaii, Los Angeles.”

Sponsoring so many mural festivals outside of Detroit naturally led to looking into a mural festival in their home town. Cory met with the President of Eastern Market Corporation, Dan Carmody, and in 2014, they started planning to bring a mural festival to Detroit. The first Murals in the Market in 2015 brought in 25 local artists and 25 international artists. They painted 50 murals. The next mural festival in 2016 brought another 25 local and 25 international artists who added 50 more murals. This year, another 50 murals were added. The murals now expand beyond Eastern Market “all the way up to Gratiot and McDougall and down Gratiot towards Ford Field,” said Cory.

This year brought several notable muralists. “One of the artists we hadn’t worked with before was Anthony Lee. He’s a local artist. We had an alley that was under construction. There’s a lot of dirt and a lot of trees. Anthony Lee made this wall no-one had wanted to paint in years past into a beautiful work of art. He made this alley more walkable,” said Cory. “The designer of the Ford GT, Camilo Pardo, painted a 50 x 25 foot mural of a Mustang that is really awesome.”

The murals do more than beautify the city. “DeAndre Levy is a former Detroit Lions player who has worked with a non-profit to help raise money to test rape kits in the city of Detroit,” said Cory. “The mural will actually be turned into a t-shirt for fundraising.”

One misperception that Cory helps to dispel is the idea that the murals are on blighted buildings. Artists must have permission to paint on a building from the property owner. According to Cory, the buildings in the Eastern Market District are owned by the local businesses. “Many of the buildings are actually under renovation. The misnomer is that a lot of these buildings look vacant or misused and you open them up and they’re very active produce and meat packing companies. Some that look the most unused actually have hundreds of employees because they are actually coolers. They don’t need windows. They need them to be dark and cold, so when you go inside these buildings there could be close to 50 guys with Hi-Los and trucks moving around.”

Murals should not be mistaken for street art. “Street art for the most part is not graffiti nor is it public art it’s just a form of putting art up in the public space that is done without permission,” Cory clarifies. “There’s always going to be a counter culture environment in any city. People always write on walls. The people with the most to say will write the most on their walls. You can see this in places like Bethlehem and Palestine that have a lot to say. They tell them through public art on their walls.” Cory defines murals as public art by artists who have permission or may receive commission to paint a wall or building. Street art is rare since it gets quickly commodified and becomes a form of public art.

Murals in the Market is funded by the William Davidson Foundation, Knight Foundation and Quicken Loans. Starting in 2018, Murals in the Market will be funded by a two-year grant from the Knight Foundation. For Cory, not having to focus on fundraising, “will allow us to do more planning earlier and will also allow us to gather data on the economic impact on the artists and business owners.” Cory estimates that just in its first two years, over $150,000 of commerce was created by the mural artists.

Cory stresses the importance of public art to help improve the city. “It is really important that as we evolve as a city we also evolve as a comforting place for visitors to know that they have the amenities that they need to get around. You can get a cab, a rideshare, pick up a MoGo, get a tour or even hit the street on your feet. There are so many aspects of ways to explore the city. Arts and culture is a really key component to that,” said Cory. “Public art is really playing a transformative role in Detroit to become a talked about city.” 1xRUN and collaborators, Inner State Gallery and Eastern Market Corporation, have helped fill Detroit with 150 murals to date, with perhaps 100 more added in the next two years. That definitely is worth talking about.