Magnus Chase and the Gods of Asgard: “The Ship of the Dead” 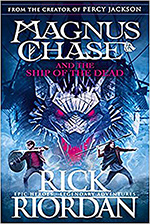 Ever wondered what it would be like to have a god for a parent? After dying trying to find a sword, Magnus Chase discovered that it’s not as great as it seems. As the son of the Norse god, Frey, Magnus can heal his friends in battle and wield the magical talking Sword of Summer. Along with these perks comes a few life threatening quests that puts Magnus and his fellow demigods to the test.

New York Times bestselling author, Rick Riordan, has been stirring up a fanbase ever since the release of the “Percy Jackson” series. Now, twelve years since the debut of “Percy Jackson and the Gods of Olympus: The Lightning Thief” and several sequels and spin-offs, Rick Riordan has come back swinging with his Magnus Chase stories.

Written in a witty first person narrative, Magnus takes readers through his life living on the streets of Boston, Massachusetts, his death and rebirth in Valhalla, and the many adventures he has gone through since discovering his heritage. After accidentally freeing Loki from his chains, Magnus and his friends have to stop The Ship of the Dead from setting sail and beginning Ragnarok.

Riordan’s take on Norse gods is much different when compared to Marvel’s version. Thor is not some long haired beauty who has no clue how humans behave while Loki is definitely not a composed English wonder. The gods are depicted as hipsters, lumberjacks, sports fans, and some times they are just jerks. They barely get involved in the lives of their children and expect too much of them. This closely mirrors today’s society and how some parents are absent in their children’s lives and step back in for only a brief moment. It is unsaid how many times Magnus has actually met with his father, but after the passing of his mother, Magnus relied on his friends, Blitzen and Hearthstone, who also turned out to be a dwarf and an elf.

The Magnus Chase Trilogy touches on several subjects of today’s world that no one would expect a fantasy novel about mythical gods to talk about. A child of Loki, Alex Fierro, is gender-fluid, meaning she is whichever gender she feels more like at a given time. With the ongoing national debate on how many genders there are, Alex Fierro steps in and explains in easy terms what it means to her to be gender-fluid. Most of the time Alex is a girl but there are times when Alex is a boy and Magnus is able to pick up on this. As a child of Loki, well known for shifting between genders and even other species, Alex has the right to not define any gender.

Meanwhile, Alex’s sister (on Loki’s side), Samirah al-Abbas, is a Valkyrie, a servant of Odin, and Muslim. During the third book she is celebrating Ramadan and sticks true to the rules of the holiday. Magnus notes her appearance when they meet up in the beginning of the book as almost zombie-like to him. Sam is also involved in an arranged marriage to a man she has had a crush on since she was twelve. Arranged marriage is something most Americans would view with contempt, but Sam has no problem with the arrangement. Sam is still a sophomore in high school, so when her fiance, Amir, says he loves her, it embarrasses her and leaves her speechless.

Magnus is also inferred to be questioning his sexuality. It began in the second book when Alex Fierro was introduced and has since grown throughout the third book. Magnus comments several times on Alex’s appearance and their time together between the second and third book. Many fans have speculated that Magnus could possibly be pansexual considering Alex is gender-fluid. Magnus refuses to admit that he possibly has a crush on the gender-fluid child of Loki but is caught staring several times and when Alex smiles back at him, he says he feels warm.

“The Ship of the Dead” is centered around the adventures of Magnus and his crew on the bright yellow boat given to Magnus by his father. Along the way they meet hungry giants, wolves, and the trickster god himself ready to stir up mischief wherever and whenever he can.

“The Ship of the Dead” was released on Oct. 4, 2017, and has quickly become a favorite among fans, spawning much fanart and theories. Fans were also happy to see the power couple Percy Jackson and Annabeth Chase, Magnus’s cousin, make a guest appearance. If fantasy and gods are your interest or maybe you used to follow the “Percy Jackson” series, “Magnus Chase and the Gods of Asgard: The Ship of the Dead” is definitely a book to pick up.