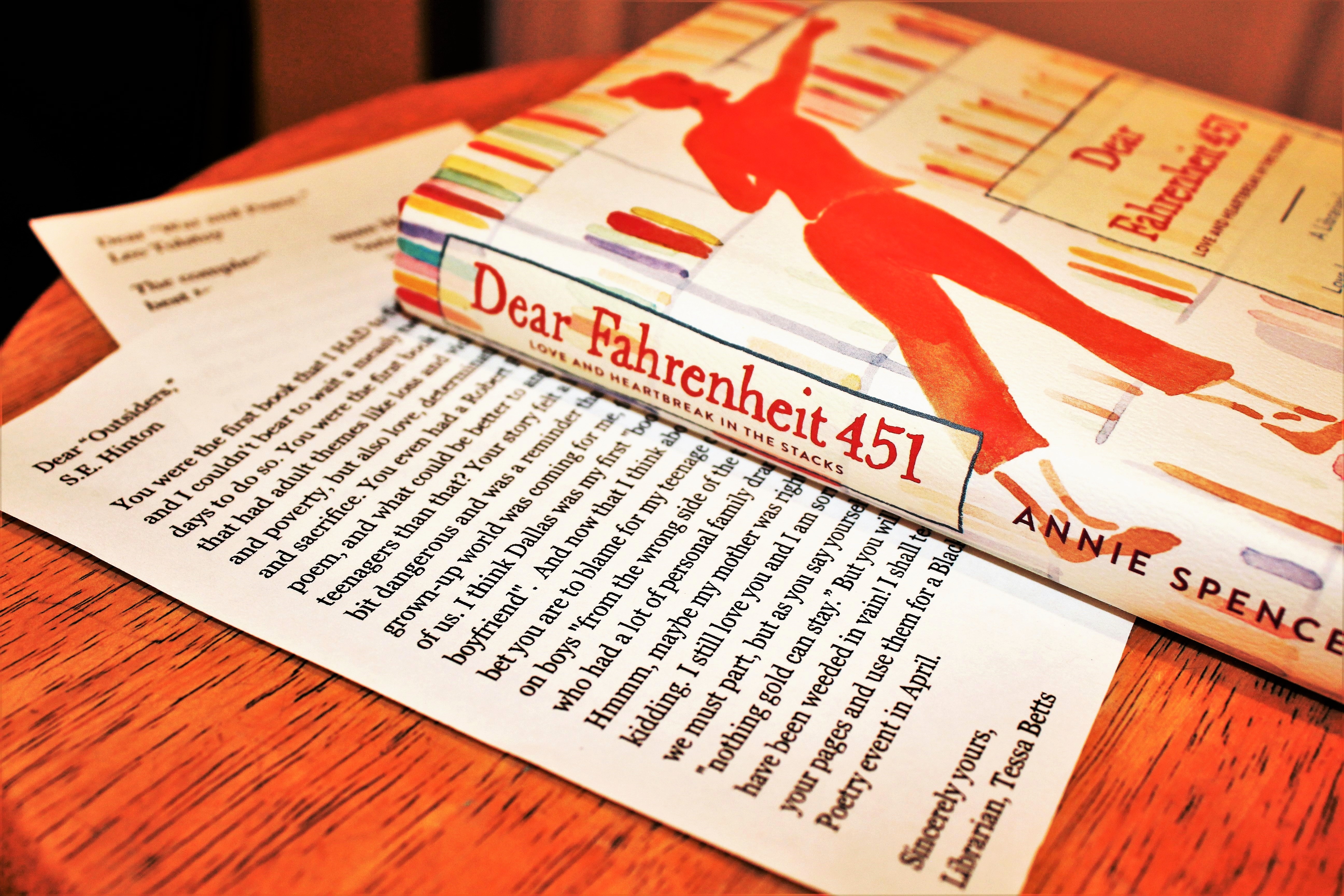 “Dear Fahrenheit 451…...Be glad you have a voice but no eyes. Since 1953, the talking walls are bigger and louder than ever. The “firefighters” are armed not with kerosene but snarky Internet memes, reality TV, and the ability to simultaneously see more or less of the world around them. I shouldn’t even tell you, but there are people who don’t believe libraries are necessary anymore. A bunch of Captain Beattys. It’s frightening.” ..

So reads Annie Spence’s love letter to her title book, “Fahrenheit 451: Love and Heartbreak in the Stacks.”

This is the debut publication of Grosse Pointe author Annie Spence, who has been a librarian in the Midwest for the last 10 years and a two-fisted reader from childhood on. She subtitles the work, “A Librarians’ Love Letters and Breakup Notes to the Books in her Life.” Spence illustrates how while working as a librarian, she’s often had to weed out books as one would weed a garden, books that have been loved so hard they are falling apart, or those that have been completely forgotten and are no longer earning their space on the shelf. To these titles she crafts a heartfelt goodbye.

“I’m a writer and I’m a librarian, but I’m first a reader,” Spence says. The collection is “a book of books that I’ve had very personal feelings about and relationships with, similar to relationships you’d have with a person.”

Spence writes to “Matilda” by Roald Dahl, the first chapter book she read by herself and the first book she remembers wanting to talk about with other people. As she has to say goodbye to an original copy, the cover torn with wear, Spence composes a begrudging breakup letter in which she thanks “Matilda” for her dark humor and for making “a bookish girl with DIY bangs like me the hero of a story.”

Spence makes it clear that not all books in her medley will be missed in excerpts like, “Dear Twilight Series, You’re on a card table at a yard sale, sitting next to an old Baby Alive doll and a plastic makeup organizer that says MADISON in foam, sticky letters. Someone’s not tagging along to college after all, hmmm? How the mighty have fallen. A little lonely now? Well, it serves you right for hogging young Madison’s prime leisure-reading years, rehashing the same old tropes, and never introducing her to something new.” “Dear Giving Tree, You broke my heart. It started out so sweet with you. I thought you were about being, you know, giving, and how generosity fills us all up with happiness. It was all little children skipping around in the woods- for awhile….You took from me ‘Giving Tree.’ You took and you took and you took. And now I’m still giving, but now I’m giving up on you. How Do You Like Them Apples? - Annie.”

From sweet to salty, Spence tells each volume precisely what she thinks of it. Some letters are nostalgic and literary, while others feel the comic wrath of their critic’s candid and shameless depiction. It’s the kind of book avid readers and librarians alike wish they had written. It’s the kind of book that makes you want to reread and classify the stories that have shaped you.

How this librarian ended up writing her own book is a bit of a fairy tale in itself. While working at a library in Traverse City, Michigan, Spence wrote and maintained a reader’s blog. She would often contact authors just to let them know that the library had recommended their book to readers on the site. One day she couldn’t find a particular author’s email address and decided to contact the author’s agent instead. After reading Spence’s tributes on the blog, the agent replied back. “I really like your writing,” she said. “Have you ever thought of writing a book?”

With fortune at the door, Spence opened it wide, sending a list of book ideas and tacking on at the end, just to give her list volume, a few breakup letters she had quirkily penned to books over the years. The agent, Amy Einhorn, loved the letters, and thought it the winning idea to draw in readers. Amy Einhorn is the Senior Vice President and Publisher of Flatiron Books. She is responsible for publishing New York Times bestsellers such as, “The Help” by Kathryn Stockett.

Spence said it took about a year and a half to write “Dear Fahrenheit 451.” Caring for her young son during the day and working at the library in the evening, she would come home with a large stack of books to add to her anthology. As Einhorn’s request for letters increased, Spence digested more and more titles, feeding the selection of commentary. Einhorn and Spence chose the book title “Dear Fahrenheit 451,” considering that of all the titles in Annie’s archives, it best encapsulated being a librarian, being a book about loving books and being a book of letters. Spence launched her new book on Sept. 26 at Pages Bookshop, an independent Detroit bookstore which opened in the Grandmont Rosedale neighborhood in 2015. Owner and chief curator, Susan Murphy was excited to host the book launch. She tells in an interview with “Rebrand Detroit,” how her own love affair with books started. “It was Grapes of Wrath and Little Women. Those were the two first books I read that made such a big impact on me,” she said. “Something about them showed me there was more out there in the world.” Murphy highlights Spence as a local author and encouraged guests at the book launch in general to shop local and small. Each book in Murphy’s selection is thoughtful and hand-picked, with a lean toward rich literature, social justice and children’s literacy.

National interest from librarians, book lovers and bloggers is rapidly growing, and the appeal seems two-fold at least. There is hope behind a story like this, one that starts on a regular day, serving the local community at the reference desk and ends on a bookstore shelf wrapped in a jacket cover of its very own. If Annie Spence’s life can do that, there’s exciting promise for us all. The second appeal is further reaching. Spence reminds us how intimate the effect of great literature can be. For the ones we don’t connect with, we weed them out, letting them go. But for the ones that get through, that shape us, challenge and change us, what a treasure they become.

The title book, “Fahrenheit 451,” was written by Ray Bradbury in 1953 during the McCarthy Era and remains a controversial book today. Bradbury said in a 1956 NBC News radio interview that he wrote the book because “people were scared of their own shadow then. There was threat of book burning in the U.S. Many books were being taken off the shelf at the time.” He drew readers into a commentary on what would happen to society if this was allowed to continue. If mass media could obliterate the growth and change initiated by literature. The book began being challenged in 1967, and it is in The Library of Congress’s “Books That Shaped America” Exhibit.

So it made sense that “Dear Fahrenheit 451” was launched during National Banned Book week, Sept. 24-30, paying homage to its bold history. Many great works that caused readers to think deeply and question their society are on the list of banned books. During this week, attention is focused on the freedom of the press and the people’s right to read without censorship.

What book got deep inside your bones? You know the one, or perhaps several, that changed what you thought of yourself, other people or the vast world around you. Think back to the title that rooted itself inside your heart and mind. Think about your freedom to read it again and again, to share it with someone else.

Here at the HFC Eshleman Library, librarians dig deep and answer the question. Librarian John Gibson says of Tolstoy’s “War and Peace”: “The complexity of human life, from our best to our worst attributes and everything in between can be found assigned to various characters and portrayed somewhere in the pages of this book, all within the context of a monumental historical struggle in Europe known as the War of 1812. When I read it for the first time I was about 19 or 20 years old. I have read it at least three times.”

You were the first book that I HAD to finish and I couldn’t bear to wait a measly two days to do so. You were the first book I read that had adult themes like loss and violence and poverty, but also love, determination, and sacrifice. You even had a Robert Frost poem, and what could be better to angsty teenagers than that? Your story felt a little bit dangerous and was a reminder that the grown-up world was coming for me, for all of us. I think Dallas was my first “book boyfriend”. And now that I think about it, I bet you are to blame for my teenage crushes on boys “from the wrong side of the tracks” who had a lot of personal family drama. Hmmm, maybe my mother was right... Just kidding. I still love you and I am sorry that we must part, but as you say yourself, “nothing gold can stay.” But you will not have been weeded in vain! I shall tear out your pages and use them for a Blackout Poetry event in April.

Annie Spence writes to the one that she deeply connected with at a young age and continues to cherish above all.

“Congratulations on your 15th year as my my favorite book,” Spence writes to “The Virgin Suicides” by Jeffrey Eugenides. “To mark this commemorative anniversary, I’m writing you a love letter. I love that you have no plot and an electric story at the same time...I love that after I read you, every time, my own everyday movements and the quotidian moments of my life feel more beautiful. That’s the mark of a lovely book. You make me never want to look at my phone again – to abandon Facebook in favor of old astronomy books and nature guides…..”

Spence says the book held such importance to her because it had both beautiful language and a great story, but mainly because it had the same sort of nostalgia for Detroit that she had, having heard stories from parents who grew up in the city. She longed to know and love it as they did. Growing up in a rural, small Michigan town, the youngest in a large family who had just enough, the world seemed rather small– until she discovered the library.

For Annie Spence, books opened a great, wide universe and changed everything.