Where Does Our Trash Go? 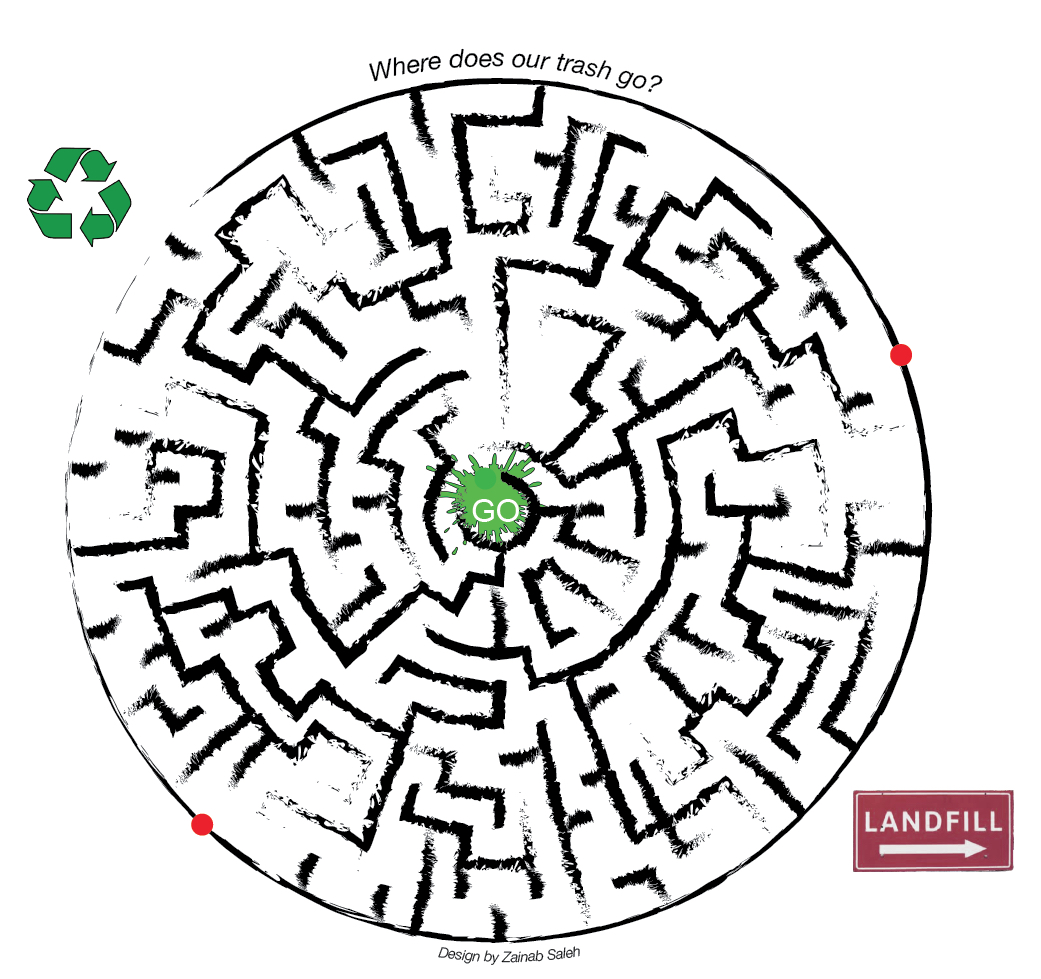 It is a mystery as to what happens to the trash on campus once it has been collected. Does it go to a landfill? Is the recycling actually recycled? What about hazardous waste? With the help of Henry Ford’s staff, these questions finally have answers.

Henry Ford College has a waste hauling contract with Green For Life Environmental to pick up standard, non-hazardous trash and recycling every day or whenever needed. The trash and recycling must be separated at the college, and is picked up by one of GFL’s garbage or recycling trucks. Trash is taken to a landfill or incinerator depending on the area in which it is picked up, but GFL couldn’t comment on which one HFC’s trash goes to. Unfortunately, and surprisingly, HFC does not currently sort materials for recycling.

“We used to have a very comprehensive recycling program,” says Sandro Silvestri, the executive director of facilities. “The problem that we ran into was that no one really paid attention to what had to go where . . . so it became extremely expensive.” The expenses came from having to pay someone to sort the recycling from trash, and the cost of having the recycling picked up. It became so expensive that it had to be discontinued. This was ten years ago. John Satkowski, the vice president of financial services, says that recycling “is something that . . . the college would definitely want to do. It’s a matter of cost . . . It’s something to take a look at to see what we could do to at least do some recycling.”

Satkowski explained that he was unaware of anything that had been put in place since the last program ended. The recycling bins in the cafeteria, it turns out, are a remnant from the old program, and its contents go to the same dumpsters as the rest of the trash. “We left them . . . to see if people would actually split up their recycling properly,” Silvestri says. “Unfortunately, we open those up and they’re full of food and . . . it becomes hazardous if you have to tell somebody to go through there and pick the food out, so we just put it all together; we bag it up and we take it away.” The blue bins labeled “recycling” that are located in some classrooms and hallways are leftover from a project initiated by HFC’s Student Environmental Association to collect and measure recycling. The project ended, and now the bins are used for trash.

“The cost [of the original program] got outrageous. The question is, do you increase tuition? Do you put recycling fees on things? The decision was made that we would just hand it off to the trash hauling company and they would do whatever they do with it.” What GFL does with it is treat the mix as standard waste. “Unfortunately, we do not sort the trash once it gets here,” says GFL. “Separate trucks pick up waste and recycling. If recycling is unsorted, it is treated as trash and either sent to a landfill or incinerator based on your area.” Silvestri says that colleges have the same struggles with recycling as cities: people don’t sort their trash and recycling.

Satkowski says that the first step in refocusing HFC back on recycling would be to take on a Continuous Process Improvement project, which can be done by approaching one of the vice presidents and putting together a report including benefits, cost and an action plan. Part of the implementation plan would focus on education for students, faculty and staff on how to properly recycle; monitoring the collection of recycling; and cost.

Other colleges in Michigan already have extensive recycling programs in place. University of Michigan-Dearborn, HFC’s neighbor, offers single-stream recycling, which means all recycling goes into one bin which is then sorted at a recycling facility. A recycling bin is located next to every trash can. Materials from UM-Dearborn are collected by Great Lakes Recycling in New Boston where they are sorted, processed and shipped. University of Michigan-Ann Arbor’s recycling program is well-established and has improved over the years, and this month is continuing to roll out a plan to standardize labeling of waste and recycling bins across campus, an initiative led by a committee consisting of students and staff that began in 2016. In the same year, UM-Ann Arbor was one of eight institutions nationally to be awarded the Sustainability Award in facilities management by APPA, an organization for the management of educational facilities.

Other community colleges are also striving to recycle. At Lansing Community College, “recycling containers are located throughout campus for paper, newsprint, plastic bottles, glass and pop cans,” which Granger Recycling processes. LCC also recycles cardboard, styrofoam, packing peanuts and batteries, and their website provides information on how and where to recycle miscellaneous items such as ink cartridges and old eyeglasses. Monroe Community College recycles the standard paper, bottles, cans and bags, and reports recycling 43 percent of their nearly 1 million pounds of waste per year. Wayne County Community College does not currently have a recycling program in place, but their 2017-2022 Capital Improvement Report includes implementing a recycling program along with other green initiatives like energy efficiency.

Recycling at HFC is undeniably lacking. However, HFC has been successful with other green initiatives like energy efficiency and adhering to strict environmental standards. For example, there is a mixing area on campus that purifies water from the parking lots, which contains oil, dirt and sand, before it is directed into the Rouge River Basin. Once a year, a company cleans out the catch basins in the parking lots. Additionally, HFC does not dispose of fluorescent and LED lights in the trash, but instead collects them to be picked up and disposed of by a company. When HFC’s science building was rebuilt, all mercury-containing thermometers were eliminated.

Over the years, HFC has made significant improvements in energy efficiency. Whenever there is a remodeling project, all lighting is switched to LED, and the electrical system on campus continues to be upgraded to use high-efficiency transformers and electrical switches. The biggest project has been the cooling tower in the liberal arts building, which was completely rebuilt this year and should save between 40 and 50 percent on electricity and water usage. It will be turned on for the first time in late April or early May.

HFC also has an excellent program in place for disposing hazardous waste. Cynthia Morris, HFC’s chemical hygiene officer, says that within the last five years the school’s procedures for handling chemical waste have improved tremendously. After the new wing was added to the science center and chemicals had to be restocked, she worked with the staff to overhaul the school’s organization of chemical information. The college now has an impressive binder filled with information detailing the chemicals used by the school, as well as procedures for the storage and cleanup of these chemicals. In addition to the book is a PowerPoint offering important, updated information to anyone who needs it.

What happens to chemicals after they are used in chemistry and biology labs? Morris, who oversees the chemical waste handling for both chemistry and biology, explains that HFC minimizes waste generation by planning experiments to require the lowest possible amount of each chemical. The school also tries to use experiments that do not use hazardous chemicals, but when unavoidable, has waste collection procedures in place. Labeled waste containers are set up in labs, where chemical solutions are then collected and reused if possible. “We follow EPA and Michigan DEQ guidelines as to what waste is allowed to go down the drain, what can be treated, and what must be given to a professional waste handling company for disposal,” Morris says. “We keep a detailed list of what chemicals are used in each experiment and all the reaction products produced. We have written protocols for the treatment of waste from every lab.” Any hazardous waste from chemistry or biology labs is labeled, packaged, and stored until it is picked up by a registered hazardous waste company at the end of the semester. The school keeps “a manifest detailing the components and quantity of all waste that is packaged for pickup, which is required by state regulations.”

Clearly, HFC has an impressive protocol in place for hazardous waste. Silvestri explained that, at one time, everything just went in the trash, including toxic chemicals. Now, regulations are more strict and HFC does an excellent job making sure hazardous chemicals are disposed of properly. The biggest improvement that has been made in regards to waste removal, according to Silvestri, is the amount of care that’s taken by the school and by hauling companies to “make sure that nothing ends up in the trash that shouldn’t be there.”

HFC is also a location for one of Wayne County’s annual free Household Hazardous Waste Days. On June 18, from 8am to 2pm, household hazardous materials including paint, chemical cleaners, and technology waste like batteries and TVs will be collected for disposal.

As environmental regulations improve, HFC and its students will have to adhere to new rules. Until regulations like recycling becomes mandatory, though, it is up to the student body to push for such green initiatives. If and when HFC does implement a new recycling program in the coming years, the smallest and easiest thing each student can do is also the most crucial: put your recycling in the correct container.