By Spencer Venis and Tyler Smith 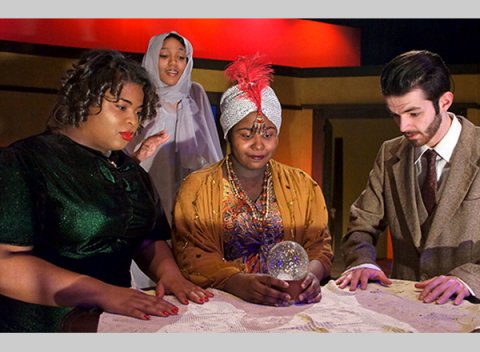 Last week, the Henry Ford College Theatre Department put on the English farce, “Blithe Spirit.” Directed by Judith Fletcher, this was a small cast production but certainly a lasting opportunity for the student performers.

The show was a humorous play filled with snarky dialogue using witty innuendo for the source of its comedy. The story focuses on the writer, Charles, who hosts a seance with his wife, Ruth, to try to expose who he believes is the false medium, Madame Arcati. The plot picks up when Charles experiences mysterious hallucinations that turn out to actually be his dead ex-wife, Elvira. This puts the character in an awkward situation especially since only he can see her and she tends to taunt him throughout the show. More mayhem occurs during Elvira’s time amongst the living, but ultimately the show ends up leaving the main character in a better place than he started.

Charles was performed by 24-year-old HFC student, Jesse Mattox, who described his character as “ an arrogant and egotistical man” that he has enjoyed portraying. Mattox’s comic timing elicited many laughs from the audience. Alongside Mattox was Kennedy Cooper who was acting as Charles’ wife, Ruth. The ex-wife, Elvira, was played by Natasha Hawkins who starred in last semester’s show of “Charlotte’s Web.” The zany medium character, Madame Arcati, was performed by Durshara Kirby, who did an excellent job imitating a cooky mystic. The show also included Thomas Peck, Bria Jones and Iesha Walker in supporting roles.

The play is set in 1940 London, allowing all the actors and actresses to perform British accents. Director Judith Fletcher noted that Steven Redwood, dialect instructor, came in and helped the actors and actresses hone their British intonations. All of the performers clearly had a good time in this production, and that enjoyment was shared enthusiastically by all in attendance.

The HFC theater department will hold auditions for its spring production, “Almost, Maine,” on Tuesday, April 11, and Wednesday, April 12, from 7-10 p.m., in the Grant U. MacKenzie Fine Arts Center building “F.”