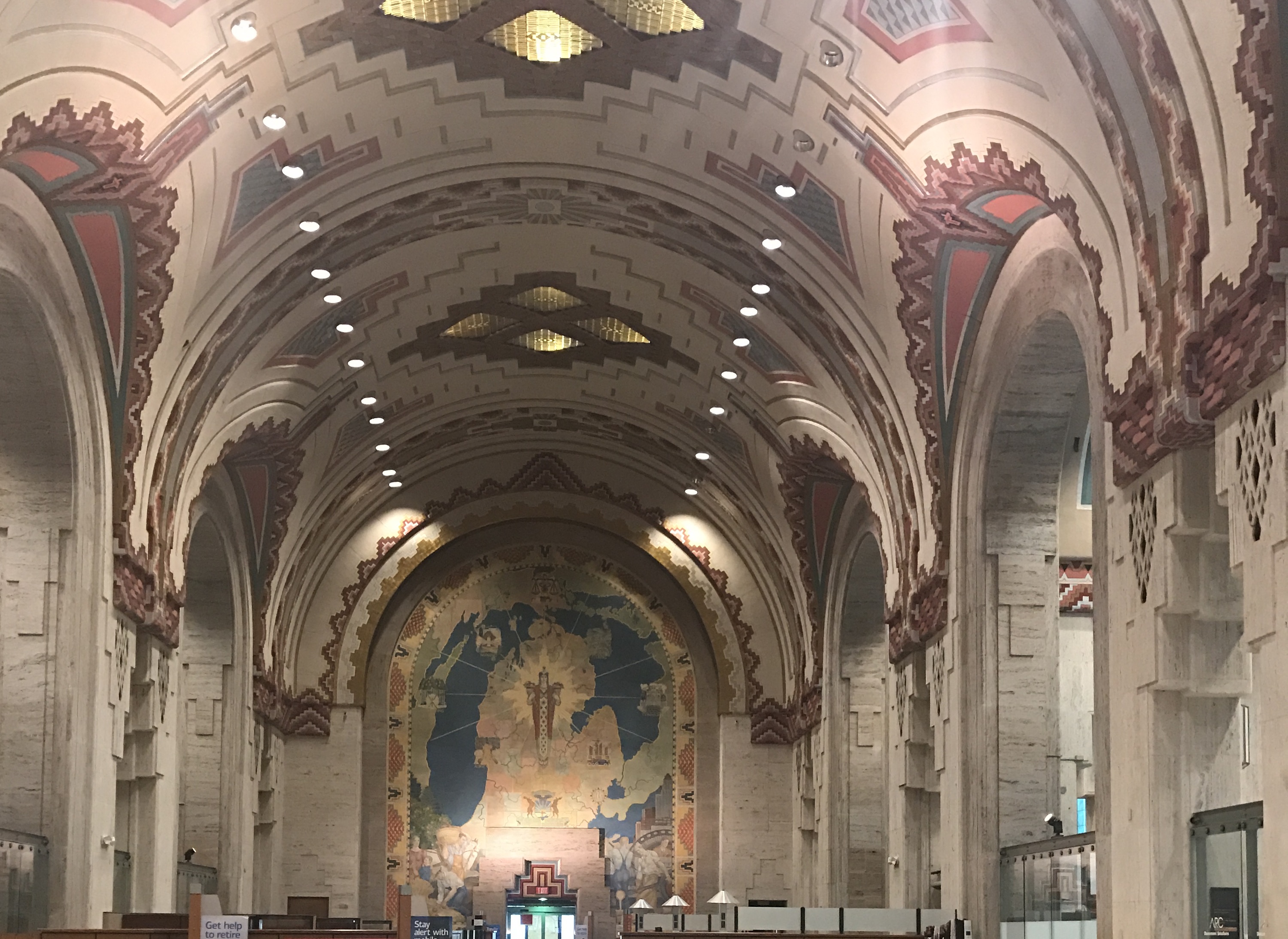 On March 1, 2017, Dan Gilbert’s Bedrock Detroit announced plans to build the tallest building in Detroit at the site of the old J.L. Hudson’s department store. The rise of new buildings like this in Detroit can literally overshadow some of Detroit’s architectural treasures. I had the opportunity to tour one of the most unique skyscrapers in Detroit: the Guardian Building.

Twenty of us were led by our tour guide, Michael, as we learned about the amazing history and Aztec inspired design of the building. Previously known as the Union Trust Building, the Guardian first opened its doors to the public in March 1929. A local architectural firm, Smith, Hinchman and Grylls, appointed the architect Wirt C. Rowland to design what would later be called the Guardian Building. Rowland would eventually go on to design many other prominent buildings throughout the city, such as the Buhl and Penobscot Buildings.

Standing an impressive 496 feet tall with 40 floors, the Guardian was Detroit’s second tallest building. While that title has long since gone, the Guardian is still appreciated for its fascinating mixture of modern Art Deco and Aztec-inspired designs.

The Guardian Building is an elegant example of the past as well as the present and future of all that makes Detroit strong and beautiful. Much of the designs located on the interior portion of the building were either flown in from around the world or handmade by artists on site. Located on the ceiling of the Guardian Building lays the representation of a Aztec Temple. Throughout, the building features an amazing mixture of materials ranging from copper, nickel and aluminum. The building also features many elaborate designs coordinated with an array of many different patterns, colors, shapes, sizes and textures. Each color and different texture was carefully selected and placed, making each shade more beautiful and vibrant than the last. It is hard to imagine the beauty that one building so effortlessly possesses. From its perfectly curved archways to its towering ceilings, the Guardian Building is as vivacious as it was in the late 1920s. Part of the reason the building has kept its luster is the specially formulated brick put together by designer Wirt C. Rowland, who named it the “guardian brick” because of its orange coloring.

On either side of the building’s entrance are Native American figures that represent the idea of safety and security, guarding the money of customers. Once at the center of the financial sector in Detroit, the Guardian Building now is home to the Wayne County Commission, which two years ago was on the verge of selling the Guardian Building. Last year, Wayne County commissioned significant repairs and restoration of the building. Whether or not that is part of plans to retain the building or put it up for sale remain to be seen.

Thankfully, with the help of Pure Detroit, a retail store located in the Guardian Building, I was able to marvel in the beauty and elegance of this architectural wonder. Pure Detroit also hosts tours of the Fisher Building, GM Renaissance Center, Belle Isle Aquarium, and the Strathmore. Tours generally last two hours and are held on Saturdays and Sundays. For information, visit PureDetroit.com.