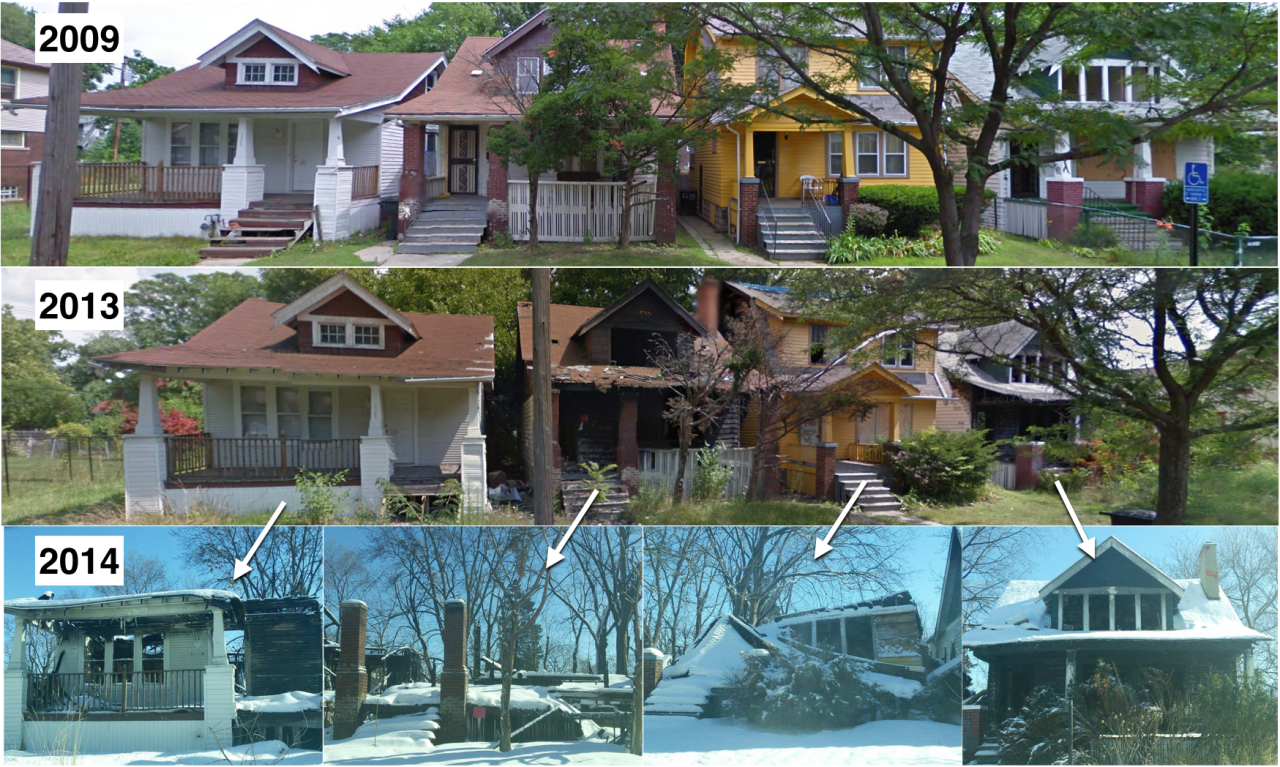 It isn’t news to any metro Detroiter that the rundown, abandoned structures in Detroit is a significant problem. If you were to drive down most neighborhood streets in the city, it’s likely you’ll see gutted homes with trash dumped along the yard sitting alone in a field of two-foot-high grass. The reasons for the abandonment of Detroit has a complex history that goes back to when its population increased more rapidly than any other city in American history. When the auto industry expanded production, and Henry Ford’s famous $5 a day announcement in 1914 brought thousands to Detroit, the demand for housing was high. This explains one of the main reasons that there are so many abandoned homes in Detroit. As more and more families could afford them, Detroit became increasingly populated by single family houses. Over 65 percent of all occupied residential structures in Detroit are single family detached houses, which exceeds all major U.S. cities including Los Angeles and New York. When the auto industry began to automate, the number of factory jobs significantly reduced, and as factories moved out of metro Detroit, that meant fewer and fewer economic opportunities. Those who could afford to leave, did, leaving neighborhoods with thousands of vacant and abandoned houses.

To try to address the vacant and abandoned housing problem, the Detroit Land Bank Authority was established. The DLBA is a public authority dedicated to returning Detroit’s vacant, abandoned, and tax-foreclosed property to productive use. The DLBA is governed by a five-member board, four mayoral appointees approved by the City Council and one member selected by the head of the state’s Housing Development Authority. One of the responsibilities of the DLBA is to auction off vacant homes to possible buyers. Within 30 days of closing, you must provide the Detroit Land Bank with a construction contract for rehabbing the property. Within six months of closing (nine months for properties in designated historic districts), a purchaser of a DLBA property must submit a copy of a certificate of occupancy or certificate of acceptance and have an occupant living in the home. Per the DLBA’s quarterly reports, between May 2014 and September 2016, 1,831 homes were auctioned, 1,256 have signed letters of intent and have submitted deposits. The DLBA has partnered up with several financial institutions to provide auction winners with the opportunity to invest in grants to rehab the newly bought auction properties. Aside from auctions, the DLBA sells homes and properties at set prices. “Rehabbed & Ready” is a DLBA program that offers newly rehabbed, move-in-ready homes in great neighborhoods. “Rehabbed & Ready” houses don’t require a construction contract because the DLBA already has renovated the property. The goal is to create jobs for local contractors, plumbers, and electricians that help renovate these properties. Another program is called “Own It Now.” Unlike Auction homes, “Own It Now” properties have not been cleaned out or secured by the Detroit Land Bank. These are usually the worst of the worst houses in the city. The purchaser will be responsible for either rehabbing the house and having it occupied or demolishing the structure on the property in accordance with city code within six months of closing (nine months for properties in historic districts). According to quarterly reports, 553 “Own It Now” properties sold to date. If an “Own It Now” property is not bought within 180 days being listed, the home is put on the “Hardest Hit” list to be demolished.

The Detroit Land Bank offers the opportunity for residents to purchase “side lots” – the vacant lot next door, for just $100. Many Detroit homeowners are concerned about the appearance of their street because of trash dumping and high grass on abandoned lots. To this date, 5,287 side lots have been purchased. In February 2010, the U.S. Department of Treasury created the “Hardest Hit Fund” to aid homeowners in 18 states that were most affected by the mortgage foreclosure crisis. The DLBA received a grant of 57.3 million dollars from the U.S. Department of Treasury to demolish buildings in Detroit. Through the “Hardest Hit Fund”, 7,593 properties have been demolished. The DLBA attempts to file lawsuits on negligent homeowners through the “Nuisance Abatement Project.” The “Nuisance Abatement Project” focuses on properties that are boarded, open to trespass, neglected, and/or dangerous throughout the city of Detroit. The project has experienced success with 5,227 houses marked with warning notices, 3,636 lawsuits filed against homeowners, 1,467 rehabilitation agreements signed, 1,582 default judgements ruled by the Wayne County Circuit Court in favor of the DLBA, granting ownership to those properties. The DLBA is making strides in solving the abandoned housing problem in Detroit, but the Land Bank is not without controversy.

Joe Guillen and Tresa Baldas of The Detroit Free Press reported in November that FBI agents confiscated computers and documents from the offices of the Detroit Land Bank Authority as they investigate the home auction program. The FBI is investigating several misreported records including false bid prices, improper count of demolished houses, and improper billing to the state. The investigation is also looking into allegations that city officials were possibly running a scam in the auction program. Since Detroit city workers get a 50 percent discount when purchasing property in the city, an employee would place a bid on a piece of property and win it at auction. But instead of moving into the home, as required under a program intended to bring residents to Detroit, the employee would turn the property over to a real estate company, which then would flip the home and sell it for an inflated price. According to its own policy, the Detroit Land Bank Authority requires those who win the action to move into the property, but these same rules, allegedly, were not applied to city officials.

Guillen and Baldas report that in addition to investigating the potential fraud in the home auction program, FBI investigators are looking into how the $250 million from the federal “Hardest Hit Fund,” that was allocated to Detroit for demolition of abandoned blighted properties had been spent in 2014, when costs for demolition spiked by 60 percent. After her name came up during the investigation, Martha Delgado, who was directly involved with the demolition program, resigned this month, and Pura Bascos, who was the demolition director, also resigned.

It seems clear that the Detroit Land Bank Authority, while intended to address blight and abandonment in the city, has its own house to clean up.