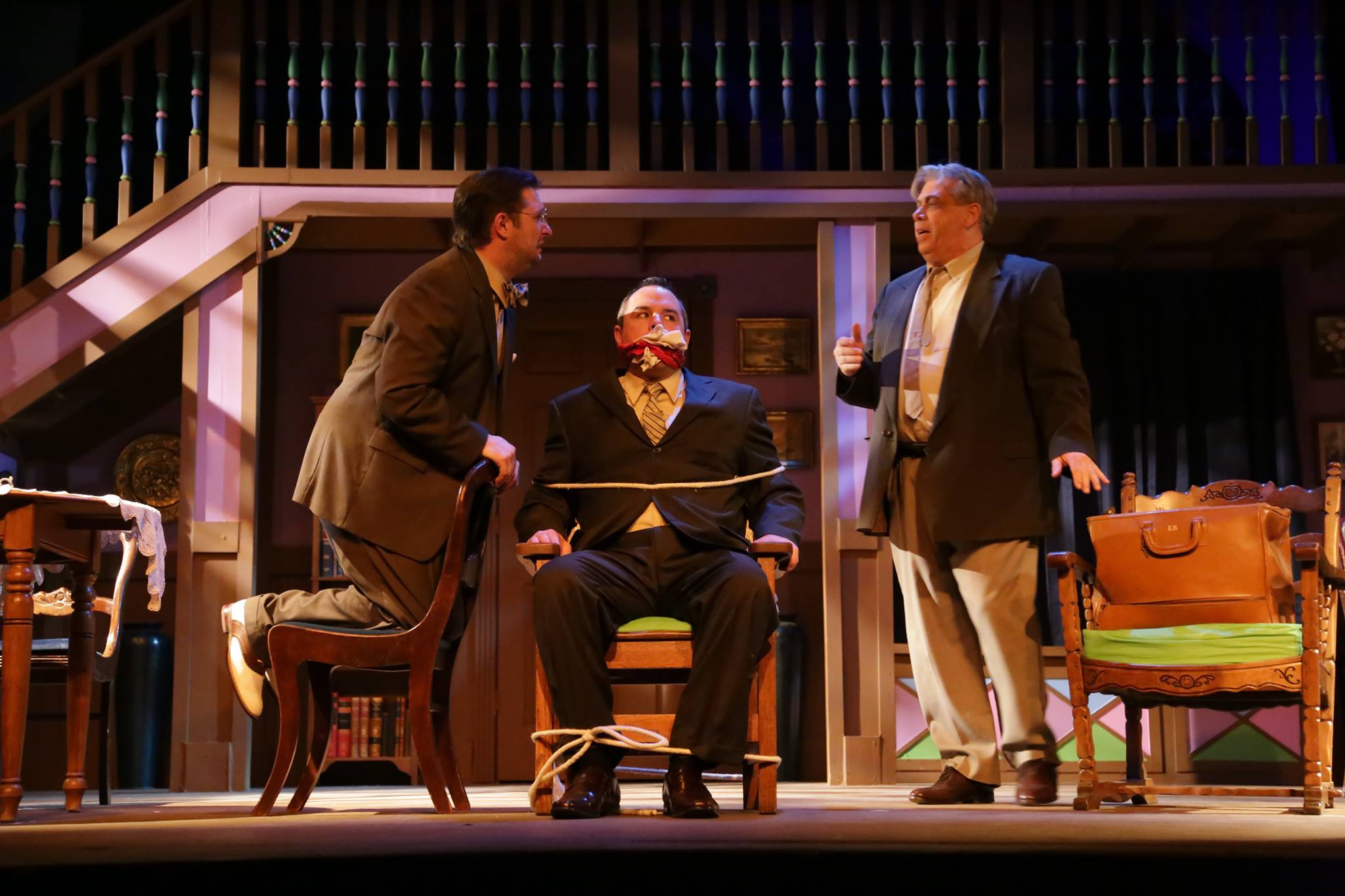 These are quotes from Salina Intermediate School 8th graders about their history teacher, Paul Bruce, or as they call him, “Mr. Bruce.” Mr. Bruce is certainly more than just a nice guy to these children- he is a hero. He earned this title because Bruce has been bringing his middle school students to see his theatrical shows for more than two decades- 28 years to be exact: “Anytime I was doing a show, I started with me taking as many kids as I could fit into my car. Somewhere along the line, someone suggested that instead of only bringing the kids from my car, why not bring them all?” Flash forward to 2017, where Bruce rang in the new year by directing the beloved “Arsenic and Old Lace” at The Players Guild of Dearborn, his home theater since 1986. Bruce has been a Dearborn resident his whole life, earning his Master’s degree from the University of Michigan-Dearborn after graduating from Edsel Ford High School. In 1983, Bruce began teaching in the Dearborn Public Schools, but took a little break when he moved to New York City in 1998. Bruce started off choreographing, and even wrote two shows that premiered off Broadway. “I was really lucky to write a show that played off Broadway at The Sandford Meisner Center, a musical called Perfectly Normal Boy,” Bruce recalls, “I also wrote a larger scale musical called Madam X which played at the Chicago Center for the Performing Arts.”

Bruce composes, directs, acts, dances, and sometimes even designs his set. After returning home to Dearborn, Bruce resumed his teaching career at Salina School in 2000, where he is still. He has found ways to bring a little bit of Broadway to work. “Every Friday some students stay at my school, where they are making up homework, and I use my time to make my set models,” Bruce explains, “The kids are fascinated by it, and I like that they’re intrigued.” While some might assume that Bruce misses being in a big city writing musicals, he truly enjoys his time spent with his middle school students: “I wish everybody knew how wonderful my kids are. There is a horrible stigma attached to the students who go to Salina School,; it’s in this isolated quadrant geographically in the city. The industrial park cuts it off from the rest of the city, and you can get in through maybe two different roads, but there is an entire community on the other side. There is this horrible mental set that these kids are ignorant and obnoxious and badly behaved, and they are somehow bringing down the entire district’s reputation, and it couldn’t be more untrue. [They are] some of the most wonderful kids I have ever worked with. These kids are sweet and kind and they want you to like them. And their families are every bit as wonderful.”

I met Bruce in person when he was working on “White Christmas” at the Guild. This is when I was first introduced to his tradition of bringing his students. One night, Bruce lined the cast up, handed us each a sheet of paper, asked us to read the words out loud, and then left the room. Puzzled, we each took turns reading the text, learning the situation of his students: many have recently immigrated to the country and do not speak English, many of them are cognitively two years behind their peers, some have physical or even mental disabilities, and all of them live below the poverty level. Without Bruce bringing them to the theater, these children would never get to experience it. “Close to 100 percent of my students live in a household below the poverty level. It wouldn’t be in their means to purchase a ticket,” Bruce stated. Many of his students are English learners, and Bruce recognizes the good theater does for them as well. According to Bruce, “You couldn’t have a better experience than to see drama performed live where they are hearing the English language, learning to understand humour, and learning the etiquette that goes along with seeing a show.”

Being on stage and performing for the students is unlike any audience I have ever seen before. While most of the jokes went over their heads and instead they laughed at things that were never meant to be funny, their energy was infectious and their applause was sincere. At the end of the show, the cast headed out into the lobby to greet the students, and their gratitude was apparent. They thanked the cast with hugs, high fives, and selfies. The children think that every show they see is the “best play ever!” (It is usually the only play that they have seen.) They were particularly excited for “Arsenic and Old Lace”--they had been begging Bruce to take them to see a scary show, and “Arsenic” is the closest they would get. I stage managed “Arsenic,” and for the first time, I was able to appreciate how well-run the event is. As an example of how organized he is, Bruce gave each child a colored ticket pertaining to when they were allowed to go buy a treat during intermission. Because Bruce was not acting in the show, and instead directing, he was able to enhance the experience even more than usual. He gave his neediest students special colored tickets to go on a backstage tour of the theater. They got to go onstage, downstairs to the makeup room, and meet the actors.

The students’ theater education does not end once the curtain falls, however. “When I meet them the next day at school,” Bruce says, “they come into class, and I give them 5 or 10 minutes to ask questions. I explain how we did something, or how a costume was changed. After that, I ask them to write a review of the show.” Bruce then brings in these reviews for the cast to read, and they are all heartfelt, even if they might be written in broken English or misspelled words. Bruce thinks of bringing these students as “planting seeds.” He has introduced the next generation to theater, and some will choose to make it part of their life forever. “I now have kids who have graduated high school, who have left college, who still come back and ask ‘when you’re doing the plays, let me know, so I can come back with my family,’” Bruce states. Bruce has opened opportunities to Dearborn community members who would have never been afforded that otherwise.

Members of The Players Guild of Dearborn are thankful to Bruce for bringing them new audience members year after year. The theater is currently in its 89th season, making it one of the oldest community theaters in the Metro Detroit area. Founded in 1927, a University of Michigan alumni group along with the Men’s Club of Christ Episcopal Church worked together to put on the first play, ”The Prince Who Wore a Red Feather in His Cap,” which was presented Dec. 30, 1927, at the old Dearborn High School. Henry and Clara Ford were among some of the first audience members. Since then, the Guild has played at different venues in the area, including the Dearborn Masonic Temple and Eloise Hospital, until it moved to its current location at 21730 Madison St. The former church building has undergone multiple renovations to become the building it is today, complete with a club room, a kitchen, a scene shop, mirrored makeup rooms, and handicap ramps. The theater feels like home, and this is why some members have been with the Guild for More than 40 years. Long-time members remember when actors George Peppard (Breakfast at Tiffany’s and TV’s Banacek and The A-Team), Chad Everett (TV’s Medical Center), and Tom Skerritt (Top Gun, Steel Magnolias, and TV’s Picket Fences) made early debuts on the Guild stage. The theater has also amassed loyal patrons who rely on the Guild to provide high quality shows at affordable prices. Some season ticket holders have been coming to see productions for decades. For their landmark 90th season next year, the Guild will be performing Neil Simon works.

Bruce also has plans for the future, particularly after retirement: “I have a feeling I’m going to end up at the Guild a lot more, donating more time during the day. I also look forward to composing new scores and working on new musicals I want to write.” Even when he retires, Bruce will not forget about Dearborn’s neediest students: “I am looking at the idea of every year finding some way to contact who I know and tell them, ‘We have another show for you guys, if you want to bring the kids.’”