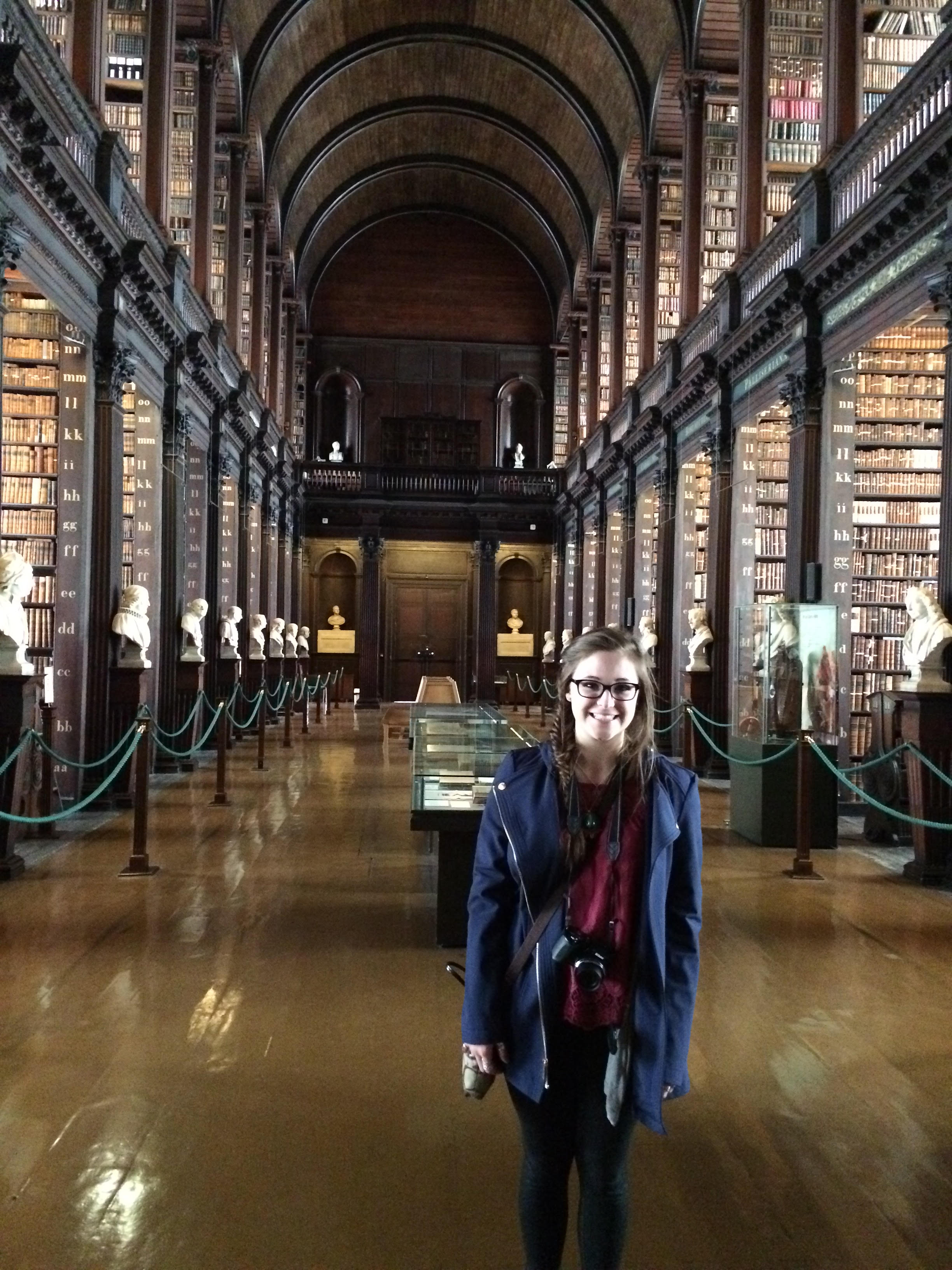 Last November, I received some of the most exciting news in my collegiate career. Thanks to the Honors Program, I would be traveling to Dublin, Ireland, to study in the library of Trinity College in May 2016. At first I was overwhelmed by the opportunity, but it quickly turned into excitement, as I spent the whole winter semester studying with my Honors directed study instructor, Mrs. Grunow, and preparing for the trip. My focus was on the Book of Kells, an 8th century illuminated manuscript written and decorated by Columban monks on the island of Iona, just off the coast of Scotland, and in Kells, County Meath, Ireland. Throughout the semester, Mrs. Grunow and I had so much fun getting to know each other and learning about Ireland’s history, illuminated manuscripts, and the Viking influences on Irish culture. However, the real fun came on May 14, when we boarded a plane for our 8 hour flight to Dublin.

We landed in Dublin at 5:31am on the 15th, and were met by Mrs. Grunow’s brother Dr. Bernard Meehan, who just retired from his position as Keeper of Manuscripts at Trinity College. Throughout the week we stayed in Dublin with Bernard and were very fortunate to study in the Reading Room of the Old Library under his guidance. Much of my time in the Reading Room was spent studying the illustrations and calligraphy from the facsimile of the Book of Kells, which was almost like studying the actual book itself. Mrs. Grunow and I were also able to go through the exhibit on the Book of Kells at the library, and at the end we had the chance to view two of the four volumes of the Book of Kells, which was a magical experience. The magic continued all week with daily visits to the Long Room of the Old Library, a day trip to Kells and Loughcrew, a bus tour of Dublin, and an unforgettable trip to the National Museum of Ireland.

One experience that I will cherish for a lifetime was when I had the opportunity to handle two 14th century manuscripts, one Irish, and one Dutch. Not only did I learn an incredible amount of information about how to handle and study manuscripts, I was completely blown away with how amazing it was that two manuscripts from almost 600 years ago still existed and that I was able to learn from them. Thanks to Bernard, Mrs. Grunow and I were able to experience rooms in the museum not open to the general public. From walking the second floor of the Long Room to having tea and coffee in the Common Room, a private place for Trinity College professors and administrators, we had the most incredible experience. We also visited the monastic site of Durrow, St. Collumcille’s Well, Glendalough Valley, where we had the exciting surprise of meeting several mountain goats and seeing our first Irish rainbow, and the Hell Fire Club trail, where we enjoyed a breathtaking view of Dublin bay.

I am more than thankful to have had the opportunity to travel abroad and study from one of the most knowledgeable people I have ever met. This experience wouldn’t have been possible without Dr. Daher, the Honors Program, Mrs. Grunow and her brother, Bernard, and their amazing family. I will never forget the experiences I had and I know they will continue to influence me in my character and my artwork for many years. I truly had the best summer ever.