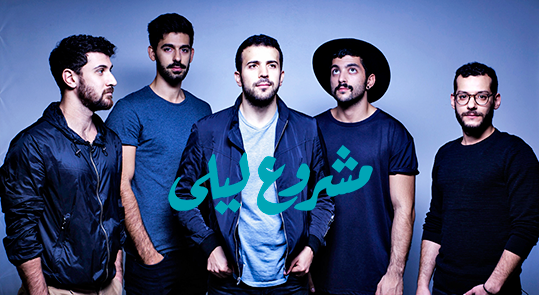 The stage was set on Saturday, June 4th, for the popular Lebanese band Mashrou’ Leila to finally make their Detroit debut. With a large Arab community, Detroit was a city the band had been hoping to play for years, and many of the city’s residents numbered among their devoted fans. Despite passion and patience from both parties, the dreams of both band and fans for Mashrou’ Leila to perform in Detroit were crushed with the cancellation of the show.

Mashrou’ Leila, a play on words meaning “night project,” began in 2008 at the American University of Beirut. Originally, the band served as a means of blowing off steam, and consisted of many members. Today, however, it consists of vocalist Hamed Sinno, violinist Haig Papazian, drummer Carl Gerges, bassist Ibrahim Badr, and guitarist Firas Abou Fakher. After graduating from their respective programs, the band members worked in office jobs during the day, with Mashrou’ Leila remaining true to its name. As the notoriety of the band grew within Lebanon and across the Arabic-speaking world, and as the guys realized that office work wasn’t how they wanted to spend their years, Mashrou’ Leila became a full-time job for the quintet.

Recently, the band has appeared in the news due to being forced to cancel a concert in Jordan after their permit to perform in the country was revoked. Certain segments of Jordanian society and government apparently found the lyrics of Mashrou’ Leila’s songs objectionable, claiming that the band “promoted Satanic ideas and homosexuality.” Officials also accused the band of encouraging people to criticise their government, something that Hamed sees no reason to deny, as he believes criticising government is an essential part of democracy. Public outcry eventually forced the government to reverse its decision, and the band is now looking forward to returning to Jordan after their American tour.

Mashrou Leila’s attempt to perform in Detroit was no more successful than Jordan, with problems beginning when the band’s flight from Chicago was delayed. Undeterred, the band and the concert organizers did everything in their power to ensure that the show went on. The venue, Detroit’s Grenadier Club, was filled with excited fans eager to see the show. The crowd was predominantly Arab and young, but still exhibited a wide range of diverse individuals. For many, this was their first time seeing the band perform live. When the show finally began, the crowd had endured delays and pouring rain, but remained positive and excited.

The opening act, performed by Detroit artist Tammy Lakkis, had the unenviable position of opening for a delayed concert. The young performer held her own, however, introducing the crowd to her bluesy sound, and garnering cheers with a cover of the famous Lebanese artist Fairuz. Unfortunately, Tammy’s performance was hampered by mic feedback and other sound issues. This was despite the soundcheck having gone off smoothly, and the sound engineer assured Mashrou’ Leila that there would be no issues with their show.

These assurances proved to hold little value, however, as issues with the mic persisted into the band’s opening number, “Aoede” from their latest album Ibn el Leil (Son of the Night). The passion of the crowd was palpable during the song’s instrumental opening, but when it came time for Hamed’s vocals, distortion and feedback hampered the experience. The band soldiered on, moving into a performance of “Ala Babu” (“At His Door”), but the sound issues forced them to take a break to give the sound engineer a chance to fix things. To keep spirits up, Hamed engaged the crowd, getting them to sing with him in an impromptu performance. For a moment, this seemed to save the show, as the sound engineer gave the go ahead and the band returned to playing.

This hope was short lived, as after seemingly brief moments of playing, an amp blew, causing yelps of pain from those unfortunate enough to be near it. The band left the stage while the organizers scrambled to find a solution. Finally, roughly three hours after the concert was scheduled to begin, it was announced that the show was cancelled due to the technical difficulties. Hamed took the stage, apologizing profusely. His sincerity was obvious as he described how the band had been wanting to play in Detroit for years, and how disappointed they were that they couldn’t perform. He also admonished the organizers, calling on them to refund the money the attendees had paid. Not wanting their fans to leave with nothing, the guys made their way out onto the floor, where they handed out and signed posters and CDs while mingling with fans.

Despite Mashrou’ Leila’s insistence the organizers offer refunds, Women’s Entertainment Team Detroit, announced on June 6 that they would not be offering any refunds. Instead, the organization has offered a 50% discount on the purchase of a ticket to one of their future events. The reaction from concert attendees has not been positive, with many taking to Facebook to voice their anger. This prompted WET to respond, claiming that the proceeds from ticket sales “paid for less than half of the band’s fee.” They pleaded their inability, rather than unwillingness, to offer refunds.

Thankfully, Mashrou’ Leila’s trip to Detroit was not a waste, as the band appeared for an informal discussion at the Arab American National Museum in Dearborn the day after the concert. Hamed Sinno, Haig Papazian, and Firas Abou Fakher sat down with fans for a couple hours of questions and lunch.

Early topics focused a great deal on the band’s history and the process of creating their music. Hamed discussed the motivation for the band, for he wondered why, as a teenager, he was able to listen to Nirvana and feel like it represented his experience, but could find no similar connection to the music he heard on the radio. This concept has guided Mashrou’ Leila throughout its life, with the band creating the Arab music that they want to hear, defying the canon of Arab pop music created by the major labels. Though originally writing for themselves, their open discussion of politics and sexuality in Lebanon have drawn many fans to connect with their music. These qualities have also forced the band to remain independent, as labels are unwilling to support their music without censoring it for the Arab market.

The discussion then turned to issues of identity. Hamed is openly queer, which sees him lionized by some and vilified by others. His identity has an important relation to Mashrou’ Leila’s songs, as in Arabic poetry and music, masculine pronouns are regularly used regardless of the gender of the subject. This remains true in love songs, allowing those performed by the band to take on a new layer of meaning with the knowledge that they were in fact written by Hamed about his experiences as a queer Arab man. Of note is the song “Shim el Yasmine” (“Smell the Jasmine”), in which the singer laments the end of his relationship and how he was unable to introduce his boyfriend to his family.

In responding to a question regarding queer identity in the Arab world, Hamed said, “It’s not about being or not being.” He went on to say, “Queering identity in general, and not just when it comes to sexuality, can be something really empowering. Where you’re never trying to deal with an identitarian agenda of “Is this queer or not?” or “Is this Arab or not?” or “Am I male or not?”” Through this, Hamed sees queerness as a method of creating support and unity through the transcending of binary labels.

Though Mashrou’ Leila is a revolutionary band whose popularity continues to grow, its members seem almost uncomfortable with particular importance being placed on their music. They are keen to express themselves and inspire change, but they also don’t want to be seen as representing Arab youth as a whole. As they continue to sing of politics and sex, controversy will likely continue to follow them. But it is in that chaos of questioned identities and shifting ideals that Mashrou’ Leila was born, and there is little doubt that it shall continue to thrive.