HFC Budget Crisis: Then and Now 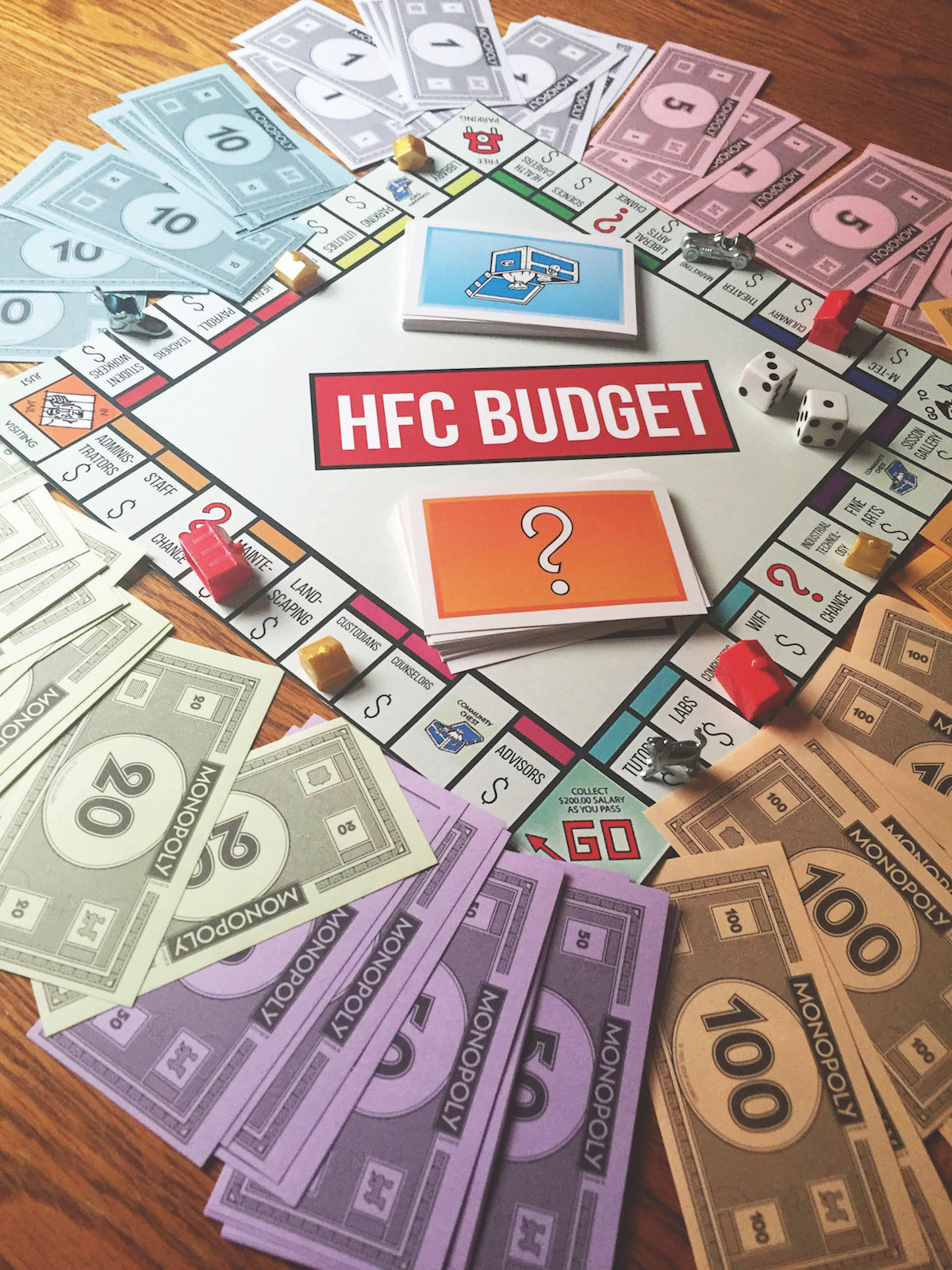 Photo and Game Board created by Emily Ruda

In 2013 a major budget crises consumed Henry Ford Community College with $12M dollars in debt and was on the brink of shutting down. A significant part of this debt was due to “Pell-runners,” students who would register for classes, never show up and cash in their financial aid and student loan checks. Katie Hetrick of The News Herald explains how the fraud was executed at HFC: “Students do not complete their classes that semester, HFCC must return all the money to the federal government.”

The fraud was the worst that had happened in the college’s 75 year history and according to David Jesse of the Detroit Free Press, the scam cost national colleges $1.2B in 2012-2013. John Satkowski, Vice President of Financial, Facilities, and Auxiliary Services, stated in an interview; “The bad debt was almost $12M back in 2013 and then dropped to $3.6M in 2014.”

The elaborate structure of the budget crises and those who contributed could be understood beginning with the college’s prior president, Dr. Gail Mee, who was hired in 2006. According to the Downriver Sunday Times, Dr. Mee increased student enrollment by 45% each semester, however the enrollment figures were not accurate due to academic policies she had cancelled. John McDonald is the President of Henry Ford College Federation of Teachers and explains what occurred while Mee was in office. “Under the previous president, Dr. Mee, policies that were put in place to ensure that students coming in might succeed here, were set aside in order to generate numbers and to generate enrollment… she suspended [the] H.S and GED enrollment requirements.”

While this increased student enrollment, policies that might have prevented or minimized the fraud were overlooked or changed, which contributed to the budget crisis. “The second problem,” states McDonald, “was that the college didn't have any reserves to cover that kind of deficit. Under Dr. Mee the college spent a great deal of money, probably approaching 12 million dollars on bricks and mortar...There was no buffer anymore.” The 12 million spent had been to purchase the SME property, the Rotunda site where the nursing program is, as well as making additions to the Science building.

In large part due to the budget crises, Dr. Mee resigned in late 2012. After a national search for a new president, Dr. Stan Jensen was hired, with the hopes that he would be able to bring the college out of budgetary risk.

While it might have been coincidence, the same year that Dr. Jensen left Colorado Mountain College, in 2012, a civil suit was brought by SourceGas, a natural gas company against Colorado Mountain College for allegedly breaking a lease agreement to build a natural gas compressor station that was signed in 2011 when Dr. Jensen was President. Despite the timing of the lawsuit, the Denver Post reported, “The president of the board of trustees, Glenn Davis of Avon, said Jensen’s departure was not connected to the SourceGas Spring Valley compressor station controversy that erupted" in May 2012.

According to the "Post Independent" of The Denver Post, as part of the Colorado Mountain College Board accepting his resignation, Jensen received "a severance package of $500,000.” No details were released about the separation agreement due to confidentiality provisions "that prohibits any of the parties from discussing its contents."

The decision from the Dearborn Board of Education to select Dr. Jensen as president of Henry Ford Community College raised serious concerns from some of the faculty in the presidential search committee. The Arab American News reported that, “individuals took the podium asking the Board to reconsider their decision, and also expressed some concerns over Jensen, with many feeling that he doesn’t have the experience to lead a diverse campus, such as the one at HFCC.”

Dr. Eric Rader is a full time political science instructor at HFC, and past President of the faculty Senate. Rader “was surprised Dr. Jensen made it past each round.” Rader was part of the search committee during the national campaign to hire a college president and despite concerns of his qualifications and history, Dr. Jensen was brought on board.

It was under Dr. Jensen’s term that the college was pulled out of its bad debt crisis, as well as started to rebuild its cash reserves. Jensen and the unions collaborated to find a solution through strategic cuts. “Dr Jensen came on board, and the union tried to explain to him that what we’ve done in the past wasn't rocket science,” said McDonald. “When you have that much deficit two things are normally done. First cut down non-personnel cost, non human being, that's the first place you look. The second place you look is personnel cost.” Jensen did the first by restructuring the school’s administration, with specified budgets for the departments, but he did not stop with non-personnel cuts. The contract for the teachers union was reopened, and cuts totaling $29 million over five years were made.

Fourteen employees had been laid off and 36 had accepted offers of early retirement. These job cuts were controversial among both those affected. David Cunningham, President of Local 71, the Administrators Association, states that, “The Local actually suffered [the loss] of 18 members on or before June 30, 2013: 14 by direct layoff, and 4 re-assigned back to faculty. These cuts had an immediate effect in securing the College did not have shortfall in mid July 2013 (which would had require the use of a bank line of cash). The Local filed grievances on behalf of the 14 laid-off administrators related to procedural rules in our contract; there were no threaten lawsuits. There were ultimately three resolutions to our grievances, with two resolved financially and one member returned to employment. The Local also negotiated a concessionary contract with the College to further move the budget to a stable basis.”* According to McDonald, to help ease tensions, Dr. Jensen took a $10,000 cut in his annuity, and offered that the budget cuts would eventually be restored. One criticism that has been voiced by some at the college is that Jensen has since restored his cut retroactively. This restoration was paired with a 2.5 percent pay increase, as well as the restoration of the concessions of his cabinet.

Despite controversy and criticism, Dr. Jensen led Henry Ford College out of the budget crisis. Beyond the cuts, Dr. Jensen, with support from the college’s unions, put two property millages to the voters. These millages sought financial support from the community through property taxes. The combination of cuts and additional income from the millages resulted in HFC holding a fund balance of $21.7 million in May 2015, according to Brian Bowe of Crain’s Detroit Business.*

Though the property millages allowed HFC to evade disaster, a bill introduced in the Michigan House of Representatives by Jeff Farrington (R-Utica) could completely change the landscape that allowed HFC to survive. The bill proposes to ban the usage of property millages for funding by community colleges if they offer any four-year degrees. Further, the bill will prevent the collection of taxes from any previously passed millages. As both of the millages passed in response to the budget crisis extend across multiple years, with one spanning 5 years and the other spanning 15, this could deny HFC funds that have already been approved by the voters.

This bill, which was first read on April 28, has broad support from universities and four-year colleges in Michigan. These institutions see the move towards offering bachelor degrees as an attempt by community colleges to bolster their own enrollment numbers at the expense of traditional four-year schools. Currently, public universities and four-year colleges receive higher state funding, but are unable to benefit from property millages, while community colleges receive reduced state funding that is balanced by the levying of millages. According to the Michigan House Fiscal Agency, property taxes make up 34 percent of the budget of state community colleges, with state aid totaling only 19.6 percent. The HFA also surveyed five colleges to determine the budget shortfall that would be created by the passing of this bill, finding an average shortfall of almost $11 million.

With the immediate danger of Henry Ford College closing its doors now passed, it may be tempting to breathe a sigh of relief, but issues remain. HFC faces a long road ahead such as whether there will be more reliance on part time staff, and if positions vacated by retired staff and teachers will be filled. The true test of how well it has weathered the storm of the budget crisis will be in how HFC fares in the years to come.

President Jensen was not available for comment during the reporting for this story.

Correction: In the June 20, 2016, printing of this story, we wrote, based on our sources at the time, that "two of the laid off employees threatened to sue the school" and that "the school responded to the suit with a $120,000 settlement to be split between the two litigants." That apparently was not the case, and we apologize for the error. We thank Mr. David Cunningham, President of Local 71, the Administrator’s Association, for providing clarification on the facts.

The Mirror News attended the May 16, 2016, Board of Trustees meeting where John Satkowski, Vice President of Financial, Facilities, and Auxiliary Services, gave a public presentation that outlined how the college was able to overcome its deficit from 2013 and reach its current surplus. Satkowski also reported on the current balanced budget and the impact of enrollment for budget projections going forward.