From the Hawks to the Pros 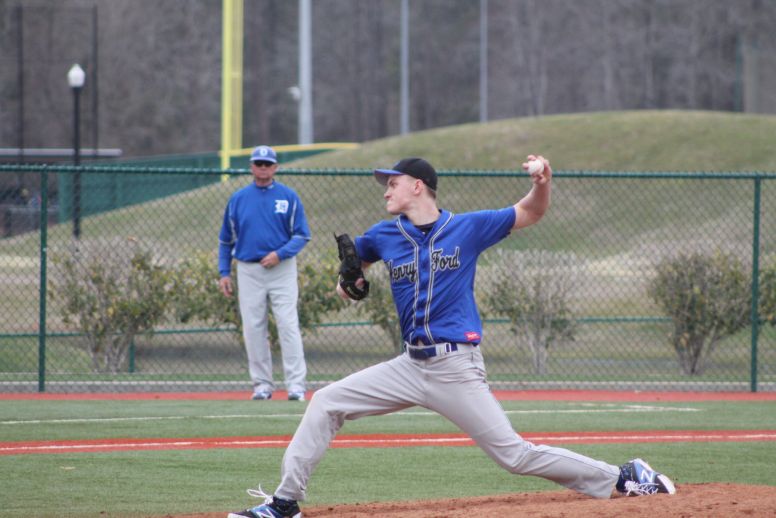 In the fifth round in the 2016 MLB draft the Texas Rangers took 6’5 left handed pitcher and Henry Ford College student Kyle Roberts. Roberts has been considered a hard thrower topping out this past year at 97 MPH. This isn’t the first Hawks pitcher taken in the MLB draft. Roberts is one of 14 lucky individuals, with the first being taken in 1970; however, he is the first taken since 2001.

When he attended Allen Park High School, Roberts was known as a hard thrower. He was a two year letterman on the varsity baseball team starting as a junior. On the mound, Roberts had a 1.99 ERA until he broke a bone in his elbow against crosstown rival Lincoln Park High School, which set him back, and he was forced to miss the state playoffs that year along with missing his summer season. He came back his senior year as the team's everyday Left Fielder and 3rd hitter. According to Assistant Coach Craig Fraser, “Roberts was one of the team’s best hitters and had great talent.” Former MLB player and Allen Park High School head coach Glenn Gulliver said, “He was a valuable part of our team both his junior and senior year, and although he couldn’t pitch his senior year, he led our team in hitting.”

After Roberts had broken a bone in his elbow his junior season, it hurt his chances of being drafted in a late round out of high school. Roberts ended up attending Henry Ford College where he excelled, especially as a pitcher. Roberts appeared in 22 games compiling an 8-4 win-loss record in 86 innings with 1 save, 124 strikeouts, and a 3.24 ERA. This past season Roberts earned NJCAA division 2 All-American third team honors. If Kyle Roberts turns down the contract that the Rangers offer him, he will head to Central Michigan University where he will no doubt carry his competitiveness to try and take over the ace role there. In the summer, Roberts has pitched for both the Lima Locos of the Great Lakes Summer Collegiate League and the Michigan Hurricanes.

On getting drafted by the Rangers, Roberts said “Getting drafted by the Rangers that have a great history with pitchers is tremendous. It's a great feeling knowing your career will be in good hands with the minor league coaches. They're the best for reasons of their development with their players and the success they have with them.” Later Roberts said that he was expecting to be drafted by the Rangers because they had been scouting him the longest, then he touched on his plans with his signing bonus saying, “It will be planned out according the future....I don't need expensive items in my life right now.” He said, “It’s a dream come true to be drafted.”

His close friend, teammate, throwing partner and former Hawk’s pitcher Enrique Reboyras said, “It's a surreal feeling, not that I feel like I'm a part of his milestone of success. But it's knowing that all the practices, long nights talking about mechanics, and long gym sessions together paid off for him. The only way to be successful is by surrounding yourself by the right people and that's why it's a surreal feeling knowing I was a part of the right group to help him be successful enough to be drafted. At the end of the day, that's what real friends are for, right?” The fans and media in Texas will fall in love with Kyle with his contagious smile and attitude. If he keeps a cool and level head, he will make an excellent Major Leaguer and will be playing baseball for a long time to come.