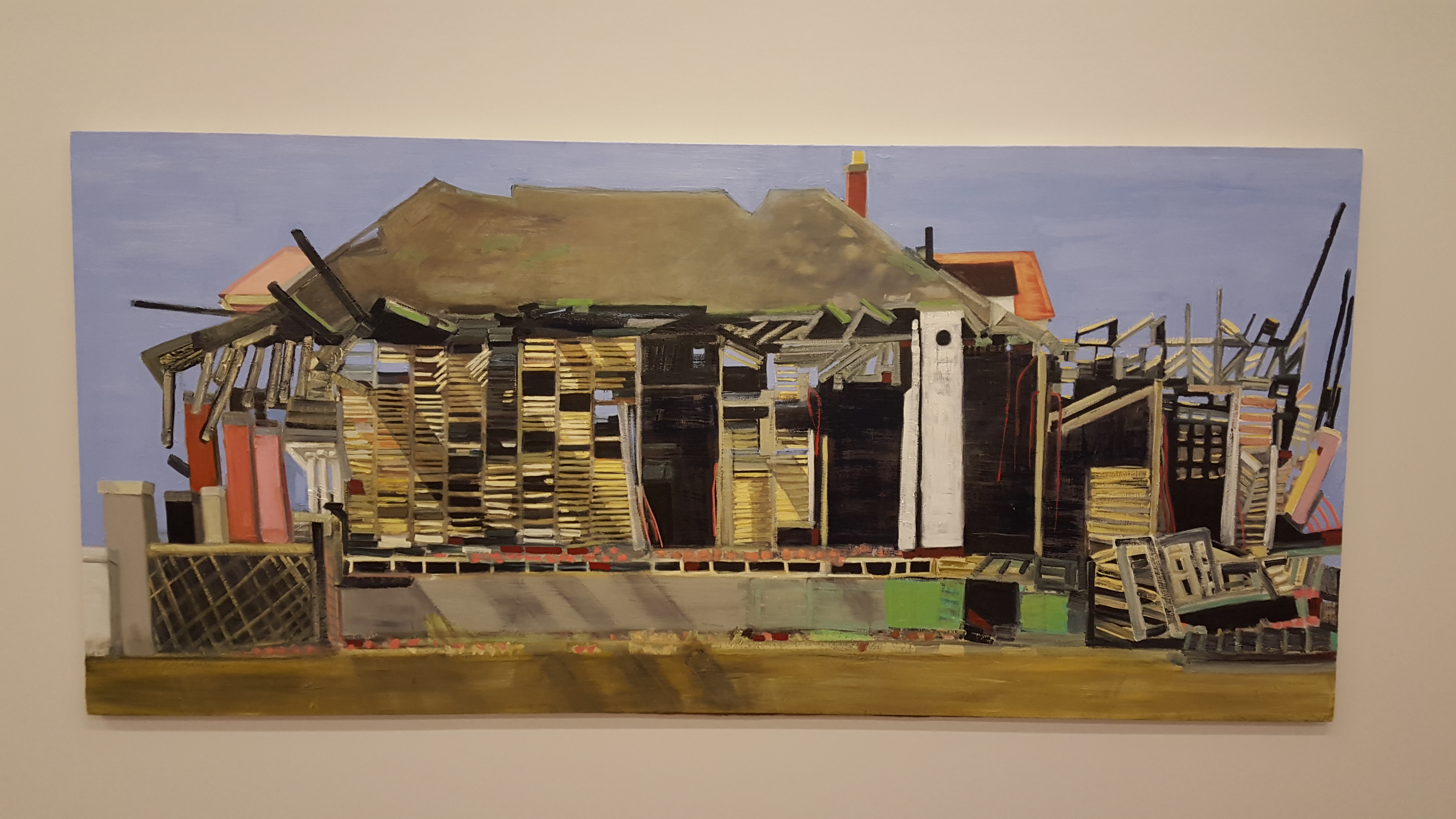 The Museum of Contemporary Art in Detroit (MOCAD) is offering a series of work titled “Uncalibrated” by Nancy Mitchnick. She was born in Detroit in 1947 and started her art career at the age of twenty. “Uncalibrated” is being featured in the colorful Detroit art space from May 6th to July 31st. The spacious gallery has egg shell colored walls and an unfinished ceiling reminiscent of an industrial, factory look with paneled lights and exposed bars for structural support. The floor has a dull polish over the orange cracked and withered tiles. In the gallery you can hear the humming of small talk being made in the café and the occasional wafting of a strongly scented coffee brew in and out of the space. The dry summer heat can be felt as fans rattle back and forth and push the hot air away temporarily. The room has a hard working, down to earth feel that encompasses much of what Detroit neighborhoods are, there is a sense that it has aged and seen a lot over the years. Much like the paintings that are displayed. Mitchnick’s work is bright and bold with thick brush strokes and richly textured paintings. Stand Alone captures the side of a multi colored rectangular building consisting of bright greens, oranges, whites and soft pink, yellow colors. It has a wooden roof with thick beams atop and a stocky orange brick chimney. Like most of the paintings it is no landmark; it’s an obscure building that captures an innate sense of hope in Detroit, while giving off an Americana vibe.
Similar sentiments are captured in Pink Water, though with a more naturalistic tone. It conveys flat lands with a natural green grass background. It seems to hint that while Detroit is very much a city with plenty of buildings and modernization, you don’t have to go that far to see nature, or the nature of the city. This is a relatively subtle statement; in the abandoned neighborhoods you can see nature dominate with overgrowth onto decrepit houses, which has prompted discussion of whether or not this land could be used as farmland. So, this dramatic shift into natural imagery shows the duality of the city, nature and nurture both have their hold. Big Burn uses a burned and dilapidated building as a visual catalyst to show the aforementioned duality. The house is rickety and the roof is sloping inwards, having become structurally unsound for inhabitance over the years of abandonment. Though nature is not predominantly present, as there is very little green, the effects are clear. In the end nature overcame the years of nurturing that was put into these neighborhoods before they were abandoned. Another duality is that of masculinity and femininity. These paintings are equally gendered in their style; they capture an unabashed, rough and fully detailed aspect that culturally is assumed to be masculine. The bright pinks and softly colored animals may be viewed as more feminine. Mitchnick firmly distinguishes the duality of painting in these works, as good artists often do, while letting the museum goers to decide for themselves. This is where her subtle undertones are key. There are occasionally men, women, and animals in the pictures.
Detroit’s underbelly is most important though; Mitchnick’s paintings juxtapose abandoned neighborhoods with nature, making such a juxtaposition look so natural in the gallery space of the MOCAD.