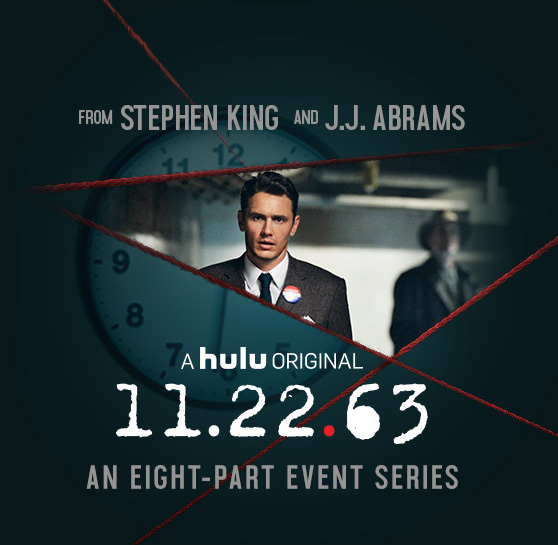 Not many of us can say we were there, but we all know the basic facts regarding the assassination of President John F. Kennedy. The 35th president of the United States was in a motorcade, driving through downtown Dallas, Texas on November 22 in 1963. Waving from the rear of his presidential limo, he was fatally injured when he was shot in the head. The car sped off to a local hospital, but he could not be saved. This we know.

The rest of the details have been highly debated, with speculation, numerous theories, and conspiracies. An eight episode mini-series event, 11.22.63, offers another idea of how history unraveled leading up to and on that fateful day.

It is based on the popular book by the same name, penned by Stephen King, who has built an empire telling us stories that make us question what is real and possible.

11.22.63 begins by introducing us to Jake Epping, played by James Franco, a high school English teacher for whom life has grown stale. He ventures into his favorite diner for a burger and to finalize his divorce papers, like you do, and quickly finds himself transported to a world that is both familiar but very different from his own. As Epping takes on the moniker James Amberson, he falls down the rabbit hole and finds himself involved in the very events that shaped a generation.

Franco’s acting is sometimes aloof, but that’s typical for him. The story itself is emotionally gripping. You can feel yourself getting anxious as Epping ventures through this world.

As I watched the series, I often found myself shouting out what I would do if I were somehow in this same impossible position.

This series is exclusive to Hulu and all episodes are now available, so you can take a weekend and marathon the miniseries, which echoes back to the days where Stephen King’s works were often adapted to run as miniseries on TV.

The grit of his storytelling very much fits in the current genre of dramatic shows like The Walking Dead and Game of Thrones, laced with violence and cursing that make King’s characters and situations feel so authentic.

Hulu has an advantage here. At $7.99 a month it is much cheaper than cable and gives them the freedom to have this type of mature content. King’s recent adaptation, Under the Dome was broadcast on CBS and subsequently a homogenized, bland version of the story.

11.22.63 is a chance for audiences to explore an alternate version of one of the influential events in our nation’s history. With great characters and a thrilling conclusion, you’ll find yourself glued to your TV. After enjoying it, I can’t wait to read the book that inspired it. 11.22.63 is now streaming.