Nina Sofia at Simon’s After Dark 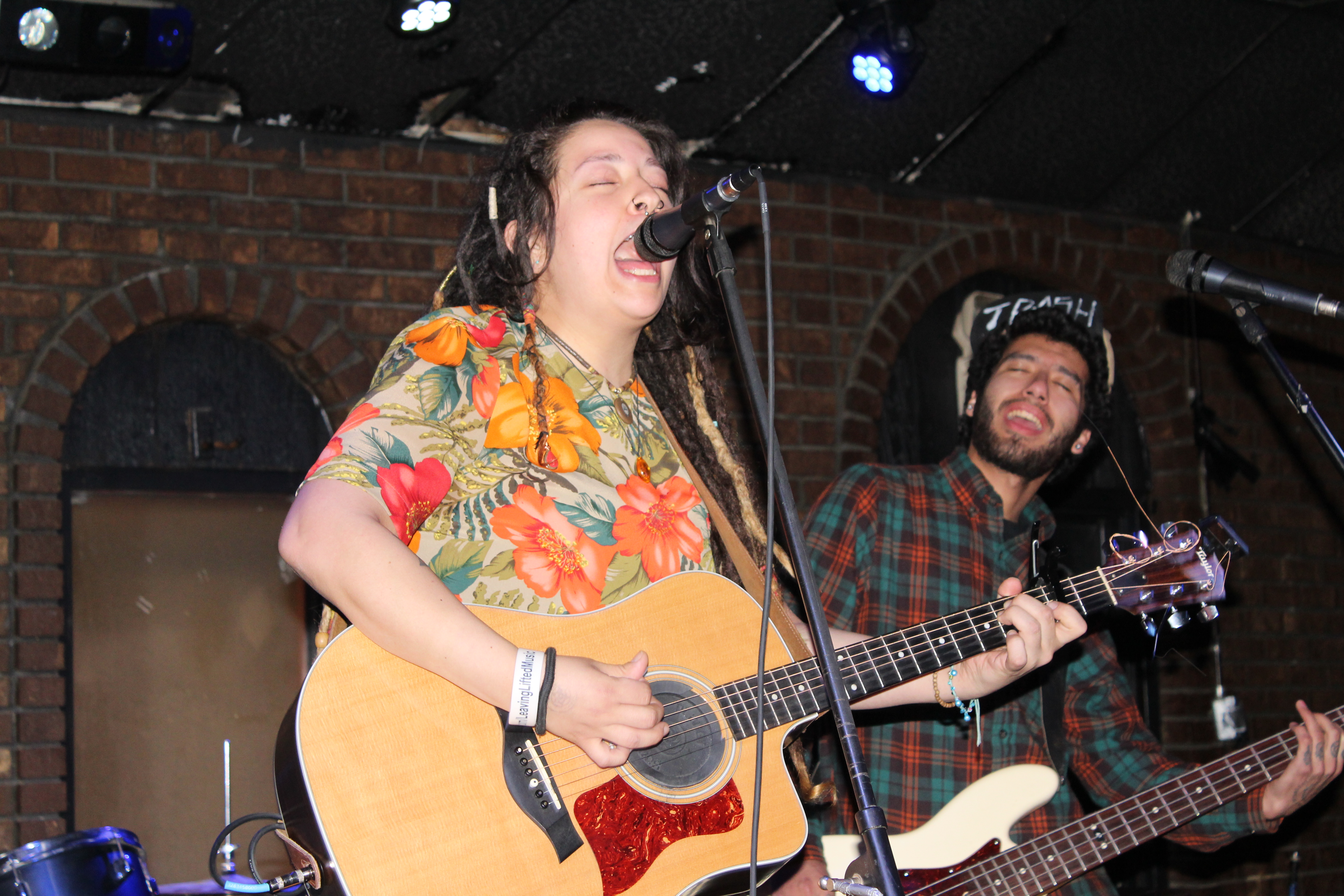 One particularly boring Thursday evening I sat, ready to settle in for another quiet weeknight with a buffalo chicken pizza and a season of Nurse Jackie. That’s when I received a text that changed my night, and maybe even my general opinion of Thursday nights.

The message was from a friend letting me know that she was hosting an open-mic night at Simon’s After Dark in Allen Park. It had been a while since I had seen her perform, and I figured a healthy social situation beat devouring an entire pizza and six hours of Netflix. So I headed up to the small venue.

Upon arrival I realized that I had made an error, one that I’ve rarely ever made; I’d showed up way too early. I was the only person there at this point. I sat quietly in the empty bar and ordered a beer, slightly uncomfortable.

In the time that it took me to finish my first beer and review my emails, the bar began to slowly fill up with two and three people at a time. As I was ready to order my second drink I heard a voice that I recognized. It was Nina Sofia and when she saw me I was greeted with an overwhelming sense of authenticity and excitement.

The bar began to fill; another musician and a gentleman who worked for the bar set up the stage. Nina began the sign-up sheet for the open-mic line-up and several other musicians joined the crowd.

As I enjoyed the general atmosphere, Nina climbed up on stage and kicked things off with original songs that constituted an admirable reminder of what is beautiful and powerful about music. It was almost as if the entire room exploded with the passion that she created with simply her presence and her voice. Her lyrics seemed to reach out and grab you, as if to say ‘I have a voice and you have ears, so listen.’ “Baby, touch me. Tell me I’m the one you need the most,” she sang as the audience cheered. “Won’t you just hold my hand? I’ll take all of this if I can.”

The individuals that followed were an overall reminder that Detroit’s music scene is strong and that it has not sold its soul to the fads of the moment. It was an awesome experience to be able to sit in awe of such creativity and originality. It’s a bold person who can stand on stage, produce melody and soul with simply their mind and voice, and inspire emotion in strangers.

Throughout the night, Nina returned to stage with original music and sensational covers of popular music. She was later joined by the bass player Ramiro Ramero, from one of her associated acts, Nina and the Buffalo Riders. Her version of ‘Send Me On My Way’ by Rusted Root was by far the highlight of my night and her cover of ‘Hit the Road Jack’ was a reflection of the fire inside, artistic perseverance, and a guiding light for those seeking something genuine in what is seemingly an increasingly artificial world.

I had the privilege of sitting down with Nina and had the opportunity to ask a few questions about her music. For as long as Nina could talk, she says she has been singing. She began singing and performing publicly at around the age of twelve and had her first paid gig at fourteen. She grew up in Detroit near Clark Park, and cites her experiences with Lincoln Park and Allen Park schools as a part of her social upbringing.

I felt that it was necessary to ask possibly one of the most frequently asked questions for a musician. That is, who would you consider to be your influences?

“When I was younger, Whitney Houston and Selena but as I got older, I was influenced by people like Alicia Keyes and Lauren Hill.”

I also asked her if she felt that she should move away to pursue a musical career in another city or if Detroit was an integral part of the music she is creating.

“Both honestly. Detroit has made me who I am as a musician. And the other artists around here are really intensely inspiring. But there is also the issue of going where the opportunities in the industry are.”

I finished the informal interview with the idea that many stage performers are actually quite anxious individuals. I asked if there was a difference between her in life and her on stage.

“It is kind of like an act. But you have to really let go. Be yourself but slightly different. You are letting people in, sometimes strangers, expressing yourself. Singing is something that comes from the pit of your soul. Sometimes it’s like you’re looking at a screen with a picture of an audience. If I didn’t play music I would be really shy.”

When the open mic had ended, I was fortunate enough to be invited to the home of a friend of Nina’s and a fellow musician. The crowd was lively and happy as they kicked back and took turns playing music and trading instruments. I was overtaken by the experience of being surrounded by so many talented individuals.

At the end of the night I told Nina that I know really good things are in store for her. She replied, “You know, I think so too.”