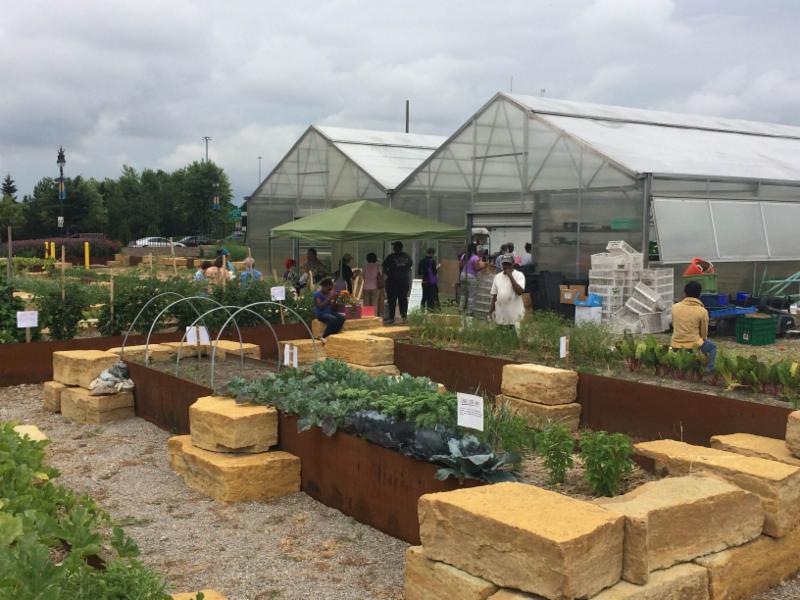 Since its peak in 1950 with 1.8 million residents, Detroit has lost over half of its population. Currently, the census estimate is 680,250. There are now nearly 40 square miles of vacant land throughout the city that are not maintained and, for the most part, abandoned.

Two local organizations, Keep Growing Detroit and The Greening of Detroit, have been leading a movement to turn vacant lots into community gardens. As Lindsay Pielack of Keep Growing Detroit explained to HFC students in a public lecture last November, residents have been claiming vacant lots and planting gardens for years, sometimes without the owners of the lots even knowing about it. Keep Growing Detroit helps residents find the means to purchase vacant lots and learn how to sustain large-scale community gardens, providing training, gardening equipment, and seeds. The Greening of Detroit started with a goal of planting 6,000 trees in brownfield sites around Detroit. Greening volunteers have planted 85,000 trees since 1989.

Urban gardens are part of a larger environmental movement of growing more produce locally. In the restaurant business, the “farm to table” trend is becoming popular among Detroit eateries like Republic Tavern and Chartreuse Kitchen. If a city doesn’t get its produce locally, that means fruits and vegetables are being imported, with shipments traveling thousands of miles on a highway, using gas and releasing pollution into the air. Advocates of urban farming explain that urban agriculture minimizes the mileage from farm to table. As a result, goods will be fresher, riper, and therefore more nutritious than what is found in a typical grocery store.

While environmentalists are among the most ardent supporters of urban farming, there are some environmental concerns. Cars and paint in cities contribute to polluted air, which could potentially spoil the soil. The contamination in produce could lead to serious health issues. David Sands of The Huffington Post reported on an effort in Detroit in 2012 to use plants that can draw out the toxins from the soil, a process known as soil remediation. Oyster mushrooms, for instance, “can break down petroleum at a chemical level,” according to Theodore Kozerski, an urban farmer featured in Sands’ article.

Advocates of urban agriculture are hopeful that such efforts can help transform Detroit’s empty lots into vibrant residential areas where families will want to move. “The desirability of living in that neighborhood on that block goes way up when you transform a vacant lot or a burned out building into a space like this,” says Detroit city planner Robert Anderson, “People become more rooted in their place and that’s what we need in this town.”