Writing to a Better Detroit 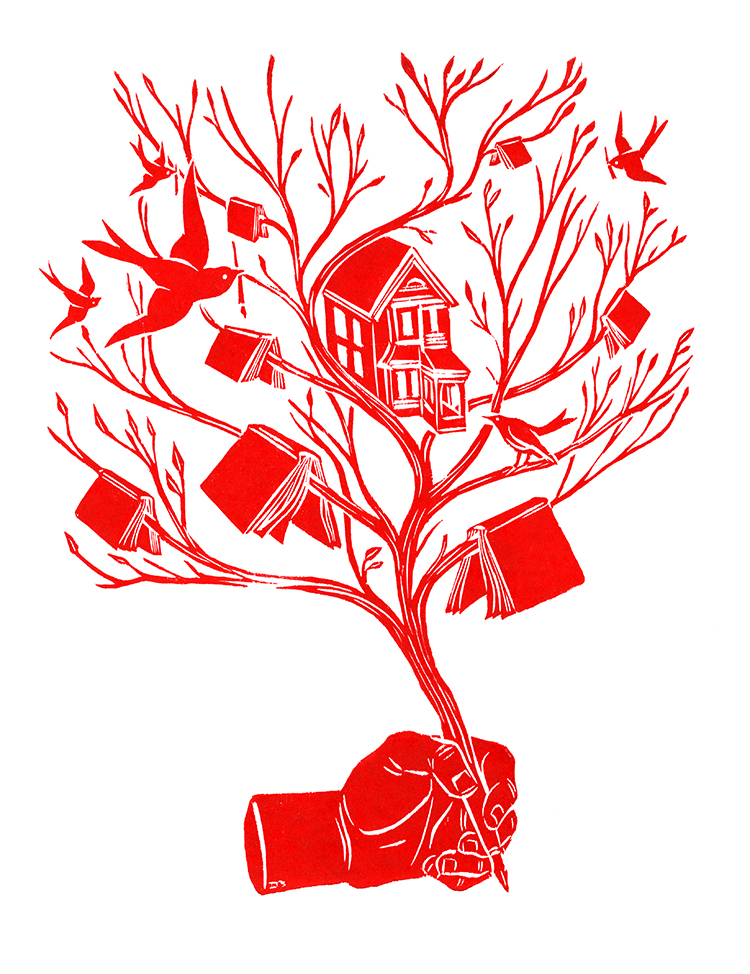 Illustration by Don Kilpatrick for Write A House Detroit

It is no secret that Detroit has been on a steady decline for many years. Recently citizens and organizations have been more determined than ever to revitalize Detroit. One organization seeks to improve Detroit one house at a time and one writer at a time. Write A House has created an innovative way to encourage creativity throughout not only Detroit, but all 50 states, with their country wide competition. With only a few regulations and guidelines, almost any US citizen is given the opportunity to compete.

Write A House announced the latest winner last September and closed their second successful year of the competition. Write A House states that its “mission is simple: to leverage Detroit’s available housing in creative ways to bolster an emerging literary community to benefit the city of Detroit and its neighborhoods. We enliven the literary arts of Detroit by renovating homes and giving them to authors, journalists, poets, aka writers. It’s like a writer-in-residence program, only in this case we’re actually giving the writer residence, forever!”

Write A House has put a lot of thought into obtaining the houses, ideal locations, as well as affordable ways to renovate. They chose to pick houses out of a neighborhood that has been referred to as ‘Banglatown’ which is north of Hamtramck.

The houses were purchased through auction and the organization has teamed up with different companies based in Detroit to help renovate the homes for future contest winners. Not only does this help out with the low cost of renovation for the organization, but it provides job opportunities and on the job training.

The creation of jobs and a bit of friendly competition has had a positive impact on bringing the community together, turning neighbors into family and strangers into friends. Rocheteau and Aghajanian are both great examples on how well this program has been doing thus far. While there can obviously only be one winner per year, it encourages writers and aspiring writers to work on their particular style.

The first winner was poet Casey Rocheteau, who told The Journal in an interview, that she really enjoys being a resident in Detroit despite what many believe about community. “I don’t really want to be anywhere else. The whole reason I applied to Write A House is because I saw an opportunity to take root and build a life somewhere.” Like the second winner, Rocheteau, was not living in Michigan before the competition. “I tried to do that in Brooklyn in terms of owning property and keeping sane. I tried to do that in Boston in my early twenties and it did not work out. I love Detroit, and where I think other places maybe wore down on me after a while, I sincerely find more reasons to love Detroit everyday.” It is this kind of enthusiasm that breathes the hope of rejuvenation into the city.

This past year’s winner was an independent journalist, Liana Aghajanian, who has moved all the way from Los Angeles with her partner to her new home in Detroit. During an interview from the Write A House blog, Aghajanian said “After being a fulltime freelance journalist for quite a while, a life that is marked by loneliness, I am not only looking forward to being part of a rich literary community, but I’m eager to let my work take a more creative, introspective direction.”

The city of Detroit brings up different imagery for everyone, from graffiti, to boarded up houses, to events like the auto show, to sports teams like the Red Wings, Tigers, or Lions. With the help of Write a House and organizations like it, we are slowly changing the image of Detroit both literally and figuratively.