A Solution for Southwest Detroit 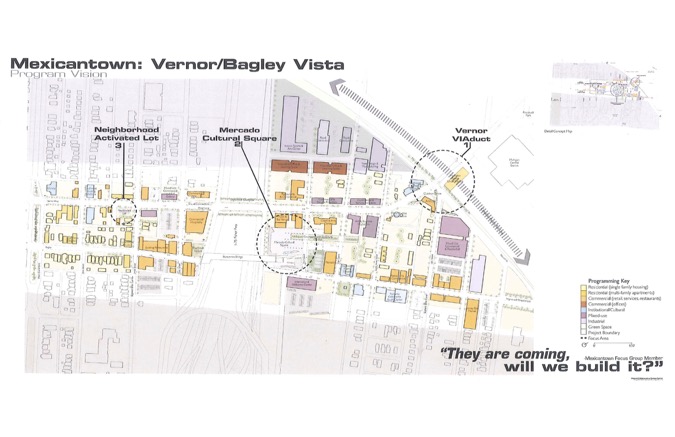 Detroit’s beloved Mexicantown may never be the same again but that’s not a bad thing, according to Southwest Solutions. In fact, members of the partnership planning the Mexicantown: Vernor/Bagley Vista project have a plan to turn southwest Detroit into a place that people from all over the world will strive to travel to.

This plan involves renovating and revitalizing a 20-block area of Detroit between the Riverfront and Corktown, effectively connecting three neighborhoods in southwest, and more notably, their residents. Although southwest’s Mexicantown is already famous among Detroiters as a hub for Mexican culture (and delicious cuisine), the goal set in place by the partnership is to turn southwest Detroit into an epicenter for people of all cultures by showcasing their art, music, and of course, food.

The partnership itself is comprised mainly of community residents, local organizations and businesses, and resource and public sector partners. According to the Vista Partnership homepage, all partners hope to see southwest Detroit maximize its potential. The Vista Partnership has a vision, and it’s a beautiful one. A presentation prepared for Southwest Housing Solutions by the Detroit Collaborative Design Center and the University of Detroit Mercy School of Architecture describes a scene in which people of all ages and backgrounds can roam freely and safely around the streets of southwest Detroit while immersing themselves in cultures from all over the world. Small galleries and other privately owned shops line the streets while restaurants specializing in ethnic foods entice visitors to come, relax, and enjoy mouthwatering flavors with friends and family. “Vista will not only serve as a key destination spot. It will link and invigorate nearby neighborhoods that are already regarded as some of the most stable and viable communities in the city,” the presentation declares. At the center of all of this activity, Vista Partnership members hope to create a “cultural square” where local musicians may attract and entertain Detroiters and visitors alike.

In order to achieve these goals, businesses will be encouraged to settle themselves in Detroit, turning the area into a popular meeting place for both professional and leisurely activities. Vista will also encourage a social atmosphere by hosting public events and farmer’s markets which would also serve to help combat the lack of fresh produce available in Detroit.

Mexicantown: Vernor/Bagley Vista has been in the planning stages since 2011 but people seem to finally be taking notice of this project which has the potential to truly rejuvenate the area of southwest Detroit. Integral Detroit businesses like Donovan’s Pub, Honey Bee Market, and Mexican Village Restaurant and institutions including Wayne State University, the University of Detroit Mercy, and Southwest Solutions have already jumped on board as committed stakeholders in this venture. This project, like so many others currently taking place in the city of Detroit, adds to the buzz that Detroit may finally be regaining the splendor that it used to be so famous for.