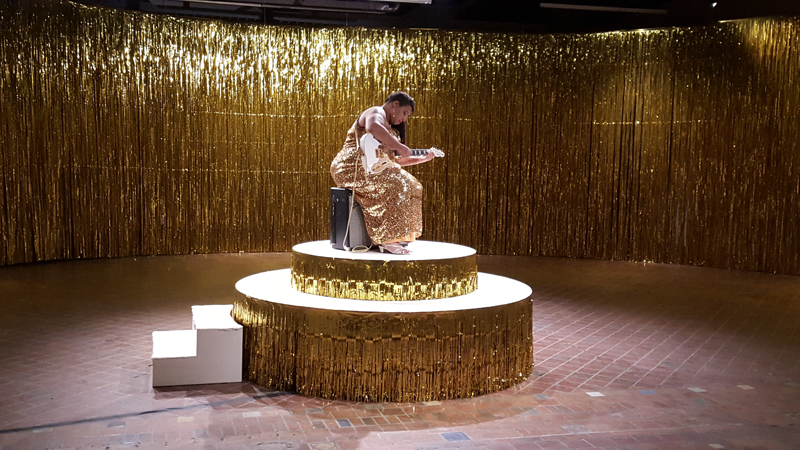 The Museum of Contemporary Art in Detroit (MOCAD) is featuring an exhibit called “The Woman in E” which will run until April 10 of this year. The display was created by Ragnar Kjartansson, an Icelandic artist known for his simplistic musical chord progression paired with a backdrop of beautiful and eccentric imagery. The woman in the exhibit plays the E chord on a rotating stage which cuts through the air with an eerily hopeful hint of serenity and utter moroseness. The emotional potency of the E chord is palpable, yet every sound is minimized while the presentation is bright and somewhat lucid.

Upon entering the museum, it’s impossible not to notice the minimalist representation of a lofty-feeling art space in which brick and overfilled cement contrast with exposed piping that runs across the walls and ceiling. The lack of complexity allows for a venue where art can be interpreted without any visual distractions. The E chord bounces off the walls and into one’s eardrums; the vibrations rattle the floor nearest to the exhibit.

The art piece is a living, breathing woman. The pamphlet envisions a thin, dark-skinned woman playing guitar on the third level of a rotating platform, only playing variations of the E chord.

The live action version of the woman is a full-bodied woman with a tattoo on her left shoulder. Her hair is in braids which rest on her back in comparison to the woman on the brochure which illustrates soft and flowing hair. With eyes closed and ears open, there is no discernible difference between a petite, socially accepted woman playing the E chord, and this one. Both exude beauty while defying society’s often rigid ideas of what elegance and poise are to look or sound like. The E chord is a harrowing, hauntingly beautiful hum, one that needs to be heard to understand. It casts deep thoughts upon the ears of museum patrons. What is heard with the ears goes along with what is seen with the eyes. This living art piece has a swift and subtle feminist undertone. She is initially shrouded in gold strands that hang like thin-laden banners from a rafter. Her silhouette waves in and out of sight as the strands sway, only to be parted as audiences enter the rotating circular display. The Woman wears a reflective gold and shining sequined dress with high heels. A white, rotating stage hearkens to what one would expect at a beauty pageant. The Woman shines light on the contradictory perpetuity that audiences are subjected to. Beauty is not always linear. Sights and sounds can contradict one another, but both are beautiful.