Parks and Rec Diner in Detroit 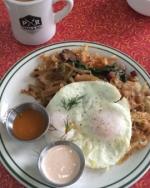 Believe it or not, one of the biggest trends that has taken over social media within the past few years is something that we have known and grown forever, something that has been ingested for centuries on end, something that plays a vital role in our everyday lives. That something, the subject that never ceases to interest us, is food. We love food not only for its many different tastes, but for its visual representation, the atmosphere from which it comes, and the ways in which it is served to us. Whether we view it as a way to simply appease our hunger, expand our taste palates, or as an aid in celebrating special occasions, food serves as not only a biological necessity, but as a social necessity in our modern world.

Living relatively close to the city of Detroit, I decided it was time to break my attachment from my usual eateries and try something new. I chose to visit Parks and Rec, a cozy breakfast diner open from 8 a.m. to 3 p.m. daily that is located in the Grand Army of the Republic Building at 1942 Grand Avenue in Detroit. This historic building once served as a meeting place for veterans of the Civil War Union Army and its Romanesque architectural style continues to capture the eyes of Detroiters and tourists throughout the city. At first glance, Parks and Rec seemed relatively small, especially considering the fact that its triangular shape only holds thirty seats. What makes this diner so unique and much greater than it appears, however, is its affiliation with Republic tavern, its sister restaurant. Both of these restaurants, located side by side, share not only the same building, but the same owner, chef, and staff. In addition, both eateries are supplied by seventeen of metro Detroit’s best local growers and vendors.

I walked into the diner on a Friday morning, and although it was pretty busy, I felt at ease. The place was slightly hectic and the tables could be considered a little too close to each other for comfort, but it was refreshing to see people gather happily, smiling and laughing over casual conversation as they ate. In fact, it seemed as though the size of the diner created the restaurant’s cozy atmosphere. No one cared how close they were to one another; everyone was there for good food and good company. Once my sister and I sat down, our server greeted us and rushed to grab us coffee. Once he returned, he mentioned that there were several coffee stations throughout the diner where we could refill our drinks at our own pace, emphasizing a comfortable, homelike environment.

Due to the fact that Parks and Rec is a breakfast diner, there are a variety of affordable sweet and savory options on the menu. Most of the items range from $5 to $15. I decided to go with the $8 High End Hash, which the menu describes as “house made crispy hash with your choice of add on, served under two eggs.” I ordered my eggs over-easy and added mushrooms, spinach, cheddar cheese, pork bacon, and caramelized onions to my hash. Needless to say, the Hash was absolutely high-end. In addition to receiving my meal in a timely manner, the kitchen staff also managed to combine savory perfection with alluring visual appeal; the meal was not only a treat for my stomach, but for my eyes. The eggs were cooked to perfection and the vegetables and meat were evenly mixed throughout the hash browns, which were delicately topped with cheddar. The portion was the perfect size, not so much that one’s stomach might explode, but also not so little that one could possibly leave unsatisfied. The breakfast was exquisitely fresh and delicious. If you are in the metro Detroit area and have an appetite for a great breakfast, I highly recommend visiting Parks and Rec!