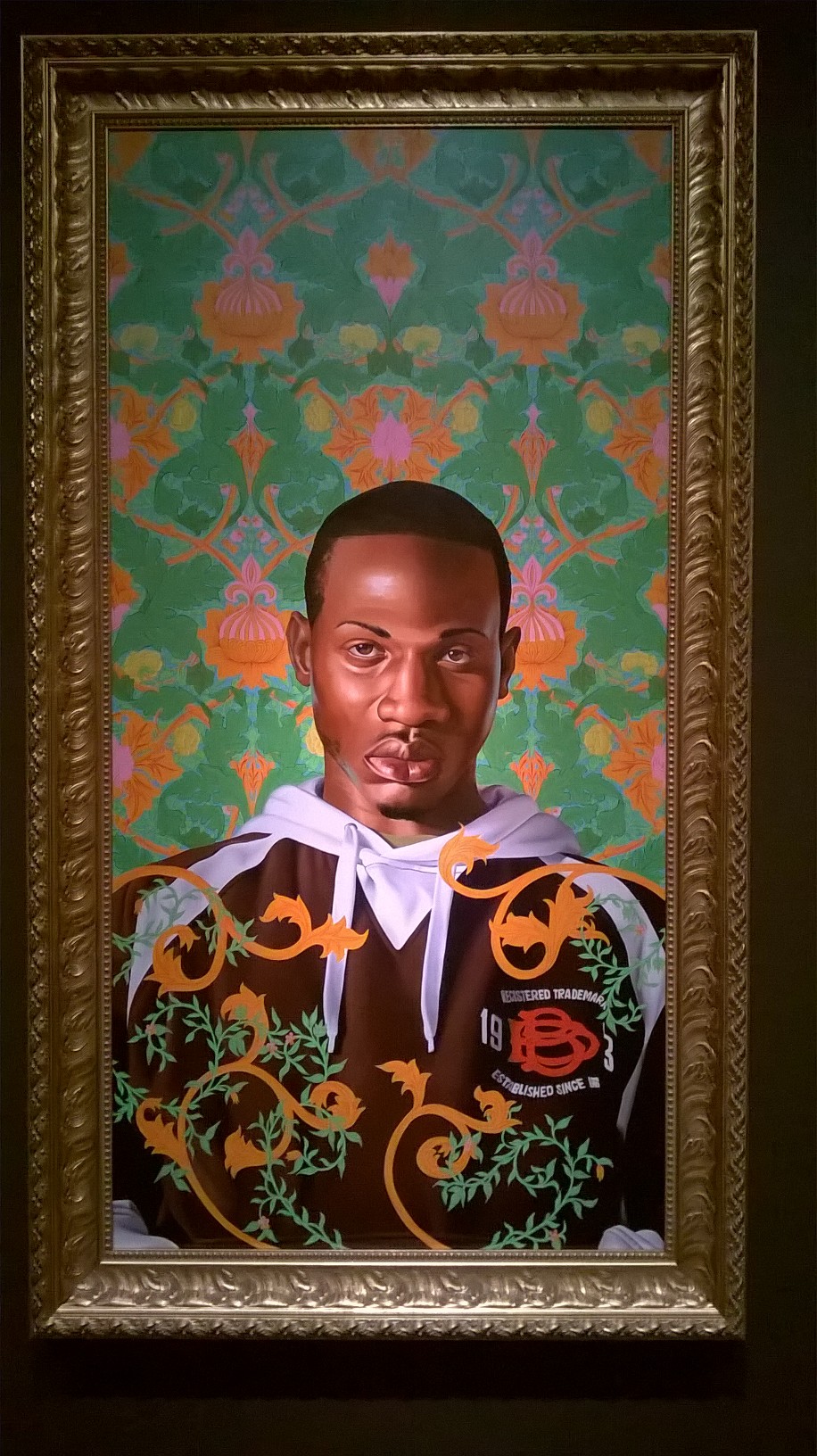 The Detroit Institute of Arts (DIA) is hosting an exhibit called “30 Americans” which contains work from contemporary African American artists like Kehinde Wiley, Kerry James Marshall, Nick Cave, and others. The exhibit began on October 18 and runs through January 18. Once tickets are punched out, museum goers are allotted sixty minutes to explore the numerous paintings with their eyes and also their ears; an audiotape is offered to industrious individuals desiring a more fleshed out, informative experience. The exhibit seems to be a useful tool for representing minority groups in the Metro Detroit area. Traditionalism takes a back seat to creativity and innovation in this exhibit as many different forms of media, painting styles, and even everyday objects are used to create an artsy yet gritty atmosphere as patrons enter the exhibit.

One example of media art in the exhibit is William L. Pope’s video where he dresses up as superman and crawls through the perils and rough terrain of Manhattan in what appears to be a visual manifestation of oppression and despair in the United States. There is another piece at the DIA called “Pygmalion” that portrays an African American woman in a position of power, sitting among Greek lore. According to Assistant Professor of Art History at Wayne State University, Dr. Samantha Noel, “many of the artists approach their work from a personal perspective, offering their own re-interpretation of history, culture, society, etc.” These re-interpretations offer unique and contemporary twists to many of the works within the exhibit.

Henry Ford student and DIA patron Landon Blevins said “This exhibit was jarring to me … For a while, I did not understand the appeal. I walked aimlessly for a while, and finally came across the third to last room which held a display which initially appeared as ghosts to me, but it was the KKK. In the room across, there was an artist who used cotton to create a giant wall … Such a simple piece seemed to speak volumes considering the fabric used.” Other pieces around the exhibit depict anything from prison inmates to a jewel encrusted African American woman that is composed of rich and vibrant combinations of color. The woman is shown with a puffed afro and sits on a yellow couch in a relaxed position; her shirt is open, baring her breasts, which adds to an already confident demeanor. Her expression is stern.

Paintings from Kehinde Wiley put African Americans in positions of power. Dr. Noel asserts, “I believe anyone who sees this exhibition will be affected by it in a powerful way.” These paintings are grand in gold-painted frames with intricate, curved patterns often associated with royalty. The African American men are shown in a variety of ways. They can be tattooed and shirtless on a bed, on top of a horse with its hooves thrown up in a glorious manner, or wearing hoodies in paintings that portray mugshot photos in an elegant manner. The tools, styles, and delineations Wiley uses in his paintings combined with the other artwork in “30 Americans,” maintain the significance of this exhibit for African Americans and empowers them as artists and people. Former HFC student Trevor Emery said, “These artists are continuing what other people already started in other fields such as literature … The way they represent black people seems almost revolutionary in a sense.” The exhibit gives the impression that this juxtaposition of faces and paintings used by black artists advocates the empowerment and achievement of black people making it significant for Detroiters and everyone else.

Although the paintings in the exhibit portray various aspects of black culture in America, its value is not diminished nor restricted to any potential patrons. “The art in this exhibition will have a positive impact on ALL people seeing it for the first time, regardless of their race,” said Dr. Noel. “30 Americans” carries a great deal of significance for both the African American artists represented in it and for anyone who goes to see their work.