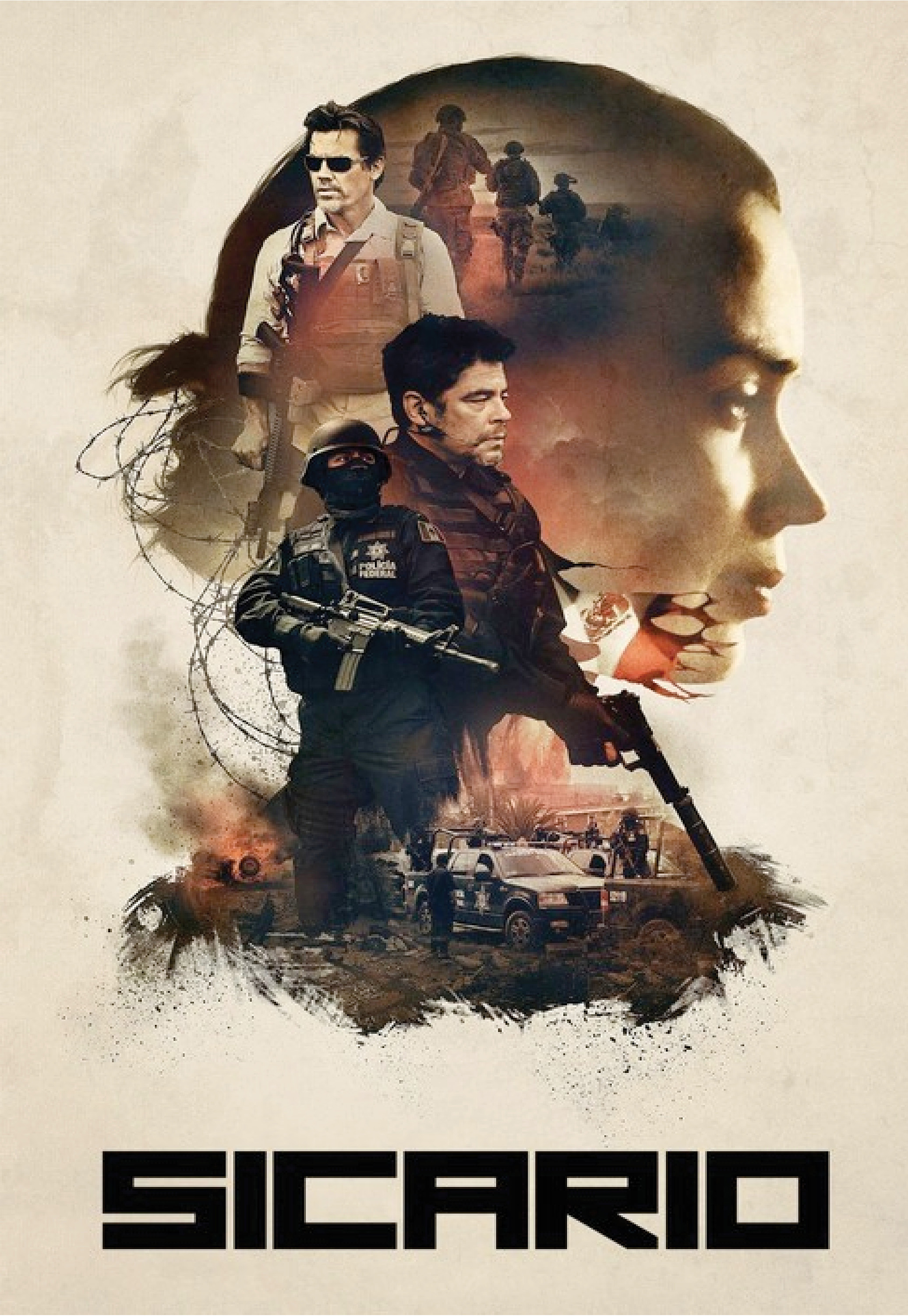 This story has been told before, but not quite like this. Sicario is the latest dramatization of the war on drugs, tensions with our neighbors to the south, and the complicated balance of politics between law enforcement and the drug cartels they contend with.

The film gives an emotional glimpse into this world. In the first moments, we’re introduced to the idea of a sicario: a hitman. Soon after we open on a bleak landscape, tense music, and men with guns. Sicario isn’t kidding around.

Unlike similar fare, such as Breaking Bad or The Wire, in Sicario you’ll be hard pressed to find any levity. This is a deadly serious world, which could easily be undermined by a cast incapable of selling it. Fortunately, everyone in the film did an outstanding job.

Our lead is Emily Blunt, portraying Kate Macer, an FBI agent who assists on kidnapping-related raids. We follow her as she enters a grisly crime scene and, from her reaction, we can tell she hasn’t encountered anything like this before. The raw emotion of her experiences there propel her into a world she is unfamiliar with but is clearly motivated to change.

Blunt’s character leaves much unsaid, but her face and actions show us more than what could ever be written into dialog. In one scene, Macer finds herself traveling outside of her jurisdiction. She’s not been filled in on a lot of the specifics, but is whisked into a caravan heading to Mexico. It is tense as the battalion of SUVs roles in and picks up their precious cargo. As events unfold, we see realization of the grave circumstances she’s been led into wash over her. A myriad of emotions are conveyed with slowly building intensity: curiosity, concern, fear, and anger. The scene concludes with Macer defending herself against an assailant who nearly ends her life. As she descends further into this world of grey, we can only twist in our seats and hope for the best. It is easy to see why there’s talk of her winning awards for the role.

She is supported by a talented cast who help to portray this world. Benicio del Toro is tremendous in the role of Alejandro Gillick, the FBI’s consultant who slowly reveals that there is more to him than it seems. Josh Brolin plays Matt Graver, the smarmy government employee who seems to have answers for every question and no desire to concede any of his power. Macer, frustrated with her lack of information, struggles to cope with all that she’s seen. The two men constantly keep her out of the loop, and with Graver’s charismatic ways and Gillick’s stoicism, she’s kept in the dark until the last possible moment.
This film and it’s actors evoke memories of Training Day, with Denzel Washington and Ethan Hawke. In both films, we see drama and danger, but even as crises resolve, we don’t feel any relief. We see a long suffering system. Both films give us a glimpse into the seedy underbelly of narco-trafficking.

Also worth noting is the work of director Denis Villeneuve. In tense times, the action is filmed tightly, enough that you feel if you could take a step backwards, you would. There are moments where we see the expanse of a space and, in turn, feel very small. We’re often shown details from the cold and impersonal eyes of surveillance equipment, a move that makes us detach a bit from the action going on. This is all strung together to move us to feel the way the characters do. We’re also often treated to visuals and moments shown in contrast. These help drive home important themes in the story. As camera shots occasionally linger, we’re left to ponder those whom the camera shows and the fate that lies in store for them.

Sicario draws us into that grey world through the optimistic eyes of Blunt’s character. By virtue of that, we have an ally. Someone who is as inexperienced and as uncertain as we are about this unsettling place. We’re allowed to see the emotional toll exacted on the people who choose to live this life. It is a unique perspective that could not have been achieved if it were a film with a generic male lead. Sicario’s storytelling is impressive. I wholeheartedly recommend it. MPAA Rating: R