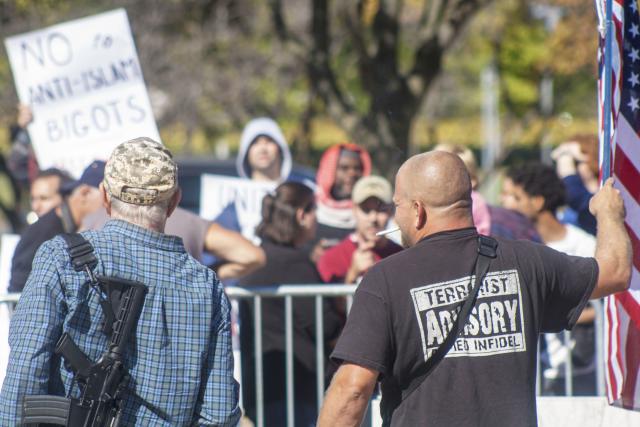 The top of the mosque is visible from HFC’s north parking lot. Across Evergreen Road and Ford Road sits the Islamic Center of America, one of the largest mosques in the country. The Mirror News received a tip that a protest would be held on Saturday, October 20, directly in front of this mosque. The Detroit News reported on the efforts of anti-Muslim groups to hold events across the nation on Friday and Saturday. Organizers used Facebook to mobilize what they called the “Global Rally for Humanity” with the intent of combating “radical Islam” while exercising their Second Amendment right to bear arms.

The protest was scheduled for 1 p.m. on Saturday and I received a call around 12 p.m. from Mirror News freelancer Ahmed Zreika. “You can’t even get in there,” he explained, “The police have it blocked off.” Maybe the police were only present as a precaution, I thought. It wasn’t the scheduled protest time yet. Reporter Issamar Almaraz and I got into photographer Hector Ochoa’s car and began driving down Ford Road. Ahead we could see the police barricade Zreika described blocking off the only vehicle entrance to the mosque.

“Pull up to these cops,” I suggested.

“Are you going to talk to them? I’ll pull up if you talk to them,” Ochoa said. But none of us in the car were quick enough to take responsibility for speaking to the police. We blew by the entrance and could see that the grounds surrounding the mosque were empty. If protesters were supposed to arrive, they hadn’t yet. We circled around back to a neighborhood behind the mosque, parked near a fence with a hole in it, and began walking towards the mosque from behind. To our surprise, the first building we walked by was a Christian church and what I think was a community center. We walked to the vacant road and towards the mosque, but no one was out except for a couple of people carrying items in and out of the building. We really didn’t know what to do at this point as it was already well past one o’clock. We kept walking until we approached an Armenian church on the east of the mosque and decided to talk to the two police officers at the barricade. I told them that we were from the college across the street and we were here to report on the protest that was supposed to take place.

“Not here,” the officer said, “they went to the library. There’s about fifteen of them. But I didn’t say anything.” We got the information we needed and headed to The Henry Ford Centennial Library on Michigan Avenue.

“Yep, this is it,” said Almaraz as we pulled up on about a hundred or so people on the front lawn of the library. The parking lot was packed and news vans belonging to channels 7 and 4 had beaten us to the story. The first thing that caught my eye, as the three of us exited the car, was another car’s license plate. It was decorated to look like the Confederate flag with a Playboy magazine frame.

As we entered the scene, a Muslim woman offered us all water bottles. She had a bag full of them. “Come on,” she said, “They are getting warm in here anyway.” There was a lot going on. The largest commotion came from the roadside and, naturally, that is where we headed first. A man on a microphone was leading a chant.

“Racists, bigots, go home!” the man shouted. The crowd on the outskirts parroted his words. The chanting of the counter-protesters was so engaging that I didn’t even notice the original demonstrators until later when I turned around and saw the “Global Rally for Humanity” protesters behind a temporary, metal barricade.

Fifteen might have been an exaggeration by the police officer. I saw three at first. When I read that the protesters may be open carrying their firearms, I expected holstered handguns. Instead they had assault rifles strapped to their bodies. Ochoa identified one of the guns as an M-16.

“We’re not racists. It’s got nothing to do with racism!” shouted one of the demonstrators. People crowded around the fence to argue with each of the gun-toting protesters. One continued, “It is about radical Islam.”

“Well, I hate radical Islam too!” exclaimed the same Muslim woman that had offered us water earlier, “Same with radical Christianity … radical Judaism.”
“Sure,” the protester agreed.

“Can I change your sign then?” The protester offered his sign to the woman who rested it on the metal barrier and, with a pen, added in the names of the other potentially radical religions.

The protesters seemed to be made up of a disparate group of individuals who had connected through social media, with no centralized agenda. The Facebook page through which they organized is called “Global Rally for Humanity: Michigan” and has very little text explaining their mission, only a brief statement: “Farrakhan’s anti-American hate rally in DC is only going to be the tip of the iceberg...Join us and rally up in resistance across the USA!!” There is also a link to rogueinfidel.com where supporters can buy all sorts of anti-Islam t-shirts and bumper stickers.

Given the number of people present, it was not clear who the protesters actually were. There were probably only eight that I saw during our entire visit. The much larger and louder group were the counter-protesters whose chants overpowered the original demonstrators.

Almaraz spoke to the man leading the chants for the counter-demonstration, Joe Mchahwar. He is a member of “Workers World Party” and “Fight Imperialism Stand Together.” Mchahwar said of the protesters, “This is blatantly racist … I think it’s insane that this country has been going to war in the Middle East and killing people there … So many people in Dearborn had to leave their countries to look for refuge from these wars and the same racists who support these wars are here terrorizing the people trying to escape them.”

Tristan Taylor, another counter-protester, stated that he thought the “Global Rally for Humanity” demonstrators were “riding the wave of the reactionary Republican party to legitimize their anti-immigrant position.”

I asked one armed protester if they had to be behind the metal fencing. “I don’t know, the cops said we have to stand behind this barricade.” I then spotted two men with assault rifles standing by the road outside of the designated area which seemed to go against what the other protester had just told me. One of their signs read “Muslims Deserve Freedom.”

“Just because we are gun owners doesn’t mean that we are Islamaphobic,” Rekab Semaj from LibertyIsForEveryone.com stated. “Hey! Make sure you get my sign in the picture too,” he snapped at an Associated Press photographer who appeared to only be taking a picture of Semaj and his assault rifle.
The handful of original protesters began to leave and we chased after them. A protester named Marsha Boadry was in a heated argument with a counter protester: “I’m an equal opportunity protester! I just love my country and we are being overwhelmed by immigrants. We can’t afford to fix our roads and we’re bringing more immigrants from Syria? We don’t even know who they are!” A police officer asked us to stand back as Boadry climbed into her mini-van with a “Trump” sticker on the back.