Scared Out of My Wits: A Trip to Erebus 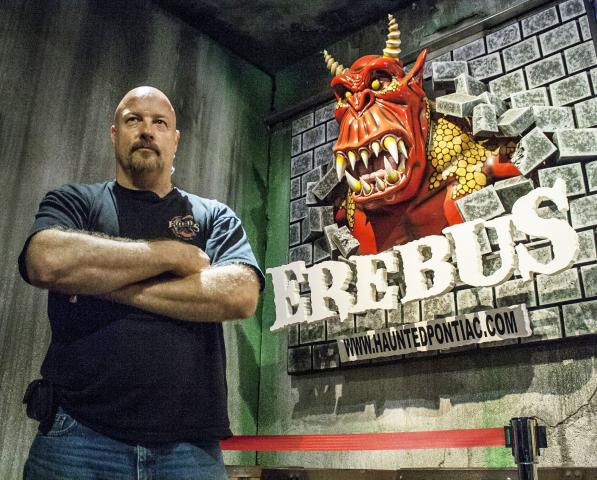 Since it’s the month of All Hallow’s Eve, I decided to finally make the trip to the legendary four story haunted house: Erebus. Located in Pontiac Michigan, many go there every year to see the new installations and be scared out of their wits. Some come from a few miles away, while others come from all over the country to walk forty minutes through this twisting cavern of monsters and other creeptastic inventions. Throughout my life I had received mixed reviews about Erebus, some said it was merely alright, others said it blew them away. After visiting for myself, I have to say that it takes the cake for the scariest haunted house I have ever attended. During the first ten minutes you will break a sweat as your body starts to release increased amounts of adrenaline. The people will not actually touch you, but there are also plenty of props that will grab and jump at you, these are designed to invade your personal space. This terrible combination of anticipation and the actual timing of the scarring makes even the toughest of men scream like little kids.

Ed Terebus tells us the lovely backstory of this lovely monstrosity: Dr. Colbert tried and succeeded at building a time machine in the building. The only problem was that when he sent people into the machine, they would come back changed. The time periods that test subjects were being sent to sensed that those subjects didn’t belong and would try to remedy their existence. After he ran out of funding and willing subjects, Dr. Colbert devised the plan to play up his time machine experiment as a haunted house to both receive funding and also ‘willing’ test subjects, which is a brilliant scheme all in all.

The current layout takes one through clown infested insane asylums of the 1800s, then it goes into the Jurassic age where the claustrophobia sets in. Lastly, there is a zombie -infested Detroit, and it is terrifying. Chainsaws, blood, and severed heads fly everywhere. It is not for the faint of heart.

We met with Ed Terebus, who was happy to help us learn more about Erebus. The place started with an idea from the decade-older-brother, Jim Terebus, who wanted to open up a haunted house after being laid by Ford. Younger brother Ed, who was 18 at the time, decided, “Sounds pretty cool to me, I’ll jump in on it,” and everything after is, as they say, history.

“The first haunted house we built was 1200 sq ft … in a parking lot, buildings and walls made by him [Jim] in his backyard. We charged a dollar fifty. Second year, we were at mobile home trailers. We had four of them, 2800 sq ft, charged $3. Third year we added a fifth trailer and 3400 sq ft and we worked there for 13 years before selling it to a church for a dollar per unit. After that we picked up 15 mobile trailers […] that was approximately 9800 sq ft and ran that [haunted house] for seven [years]. But that was so much work, temporary electric, temp sprinkler systems, y’know setting it all up. Two weeks to setting it all up, two weeks to run it and two to tear it down and storage and fees and towing fees […] We said, we could buy a building!”

While running that second haunted house for seven years, the Terebus brothers found the building where Erebus now stands, but they thought the price was too expensive so they decided to leave it. Four years later, they decided that the price was reasonable enough. Ed sold his house, Jim remortgaged his, and both invested the money into building their final haunted house back in 1998. The haunted house opened for business in 2000. In August of 2005, they earned the Guinness World Record title for the World’s Largest Walk-through Haunted House, but lost that title in 2009. The walk-through is a bit over half a mile, but with the special effects and work put into the walk, it may as well have been 10!

Next, we enquired about the difficulties the brothers faced while running their business. Ed Terebus said that besides space and money, “Parking […]ideas and concepts! Southeast Michigan is known for being the Haunted House Capital of the world, where there is more haunted houses within a 50 mile radius than any other place in the whole world… The problem with that is, you go to a trade show, you wanna buy something, you can’t! Because 25 other guys are gonna have it. So our claim is being unique and different ways of scaring you.”

Some of rooms that you can expect to find at Erebus are: The Bottomless Pit, Spiked Wall and Spindle Wheel, the Swamp, Buried Alive, the Mutant Gorilla, and Baby T-Rex. Ed Terebus personally confirms visitor reactions, which includes a tally of “wimps, wetters, pukers, and fainters.” When we visited, the grand total for the wimps was 7,104, and for “wetters, pukers, and fainters,” it was 913.