Only During Halloween: Haunted Asylum in Northville 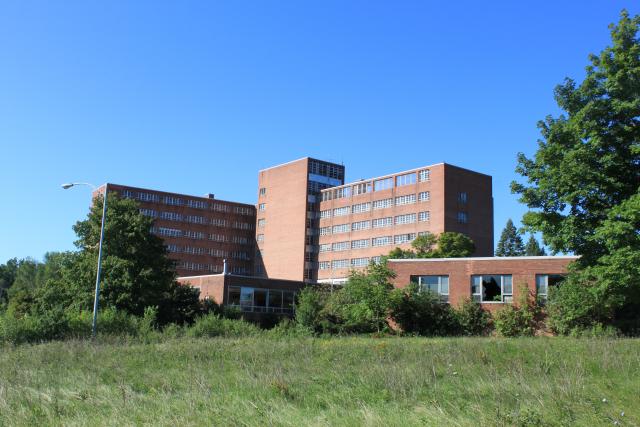 Any other time of the year, people pass an old, abandoned hospital or warehouse without a thought about the story behind it or what possibly lurks within it at night. However, around Halloween time, everything suddenly becomes spookier.

Whatever it is that gives abandoned buildings the extra scare factor around this time of year, it seems to be all the rage to check them out and see exactly what the big deal is. After all, it’s just a building, right?

Built in 1952, the Northville Psychiatric Hospital housed almost twice its maximum capacity; over 1,000 patients on a regular basis. Northville was always packed, since the day it opened. The site had 20 different buildings spread across the land, almost equaling the size of the entire HFC campus.
Mental homes have generally had a bad reputation. In 1980, Michigan began cutting back on how much the state gave to all asylums and, one by one, they began closing down. Northville stood strong as one of the last open and functioning psychiatric hospitals until 2003 when it was finally forced to close.
Since then, Northville has had many curious trespassers visit the grounds even though strict laws prohibit individuals from entering.
“I wanted to see what is was all about. Why it was such a big deal,” says Adam Naser, a brave student who has visited the supposedly haunted building. “From the time I walked in until the time I left, I could never shake the feeling of someone watching me,” he said.

He and his group of friends explored the entire site, with the exception of the underground tunnels which he admits they were too afraid to enter.
As it has been nearly a decade and a half since the hospital closed, it’s in bad shape. Pictures show ivy growing over walls, smashed open windows, and even crater-like holes in the floors that lead to lower levels. Naser describes the inside as awfully vandalized, with beds pushed over, cabinets raided, and even glass littering every step of the floors.

“The feeling of being followed lingered even hours after I had left the area,” Naser recalls.

Whether it is a Halloween dare or natural curiosity that leads you to delve into the mystery of abandoned sites, let it be known that whatever lurks in the shadows is waiting for you, and so are the police.