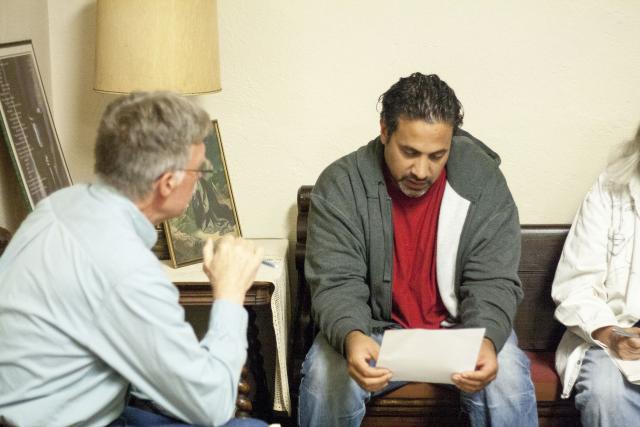 Wayne County is facing one of the largest foreclosures in the nation’s history, with the city of Detroit being hit the worst. The 2008 financial crisis has made foreclosures and evictions all too common in many neighborhoods. The shame and isolation that many feel when having to face eviction can be crippling, but community groups and labor unions are banning together to fight for people struggling to keep their homes.

Detroit Eviction Defense (DED) is one such group whose aim is to curtail the destructive effects that foreclosures have on neighborhoods in Detroit and it’s surrounding area by using a combination of different legal, direct action tactics. “We gather to put a face” on the foreclosures, said Steve Babson, author and retired Wayne State University professor of the Labor Studies Center, and one of the founding members of Detroit Eviction Defense.

Babson is a long time resident of Detroit’s East English Village and when his neighbor, Velva Davis, was threatened with foreclosure by Wells Fargo, he and other members of the community came together to help defend her home. Davis could not even get Wells Fargo to return her calls as she tried to save her home, but when 60 people picketed in front of the Wells Fargo bank, they called Davis that same afternoon and she was able to reach an agreement to stop the foreclosure.

DED has no staff on payroll; all work put in by members is done on a volunteer basis. The weekly meetings are held at Old St. John’s Church by Eastern Market and bring a diverse group of people together including attorneys, UAW members, and individuals fighting to keep their homes.

“The homeowner has to be part of the meeting and be prepared to make their personal information public. A lot of people blame themselves instead of the institutions, and the injustices of the banks and mortgage companies,” said Babson.

The process of starting a campaign to stop a foreclosure or eviction begins with a homeowner attending a meeting. There they can get connected with volunteer workers who can write down their story and begin publicizing it to gather support in the community. Lawyers are also present to help decipher what legal options are available.

“We are here for people who are trying to defend their homes all over metro Detroit,” stated Robert Day, supervising attorney for Legal Aid and Defender Association Inc., and member of DED, at the coalition’s weekly meeting. One of the community allies mentioned during the meeting was UAW local 600, “Whenever we ask them for help, they show up” said Babson.

“Unions are in crisis too. They are confronted by the new legislation that allows individuals to opt out of paying dues,” and if they want to stop being stigmatized as “Special Interest” groups they need to ally with working people in the community, according to Babson. He refers to this type of union organizing around issues in the community as Social Unionism.

UAW Local 600 has been working with community groups like Detroit Eviction Defense for seven years now and has a long history with Babson who helped lead classes for the local on the history of the Labor Movement. Through these classes and the leadership of the Local 600 president, Bernie Ricke, the local has adopted Social Unionism. “Under Bernie, we’ve really advanced. We come in contact with a lot of different community groups, like ACCESS, and Michigan United, volunteering man hours, and doing get-out-the-vote drives,” stated AJ Freer, 2nd Vice President of Local 600.

“As one of the largest locals, we feel we have a responsibility to the community. When the Recession hit, money was given to the banks to help keep people in homes, and the money wasn’t used for that,” Mark DePaoli, Local 600 Financial Secretary, went on to say.

According to an article on America.Aljazeera.com, the rate of foreclosures in Detroit has been rising since 2002, with 24,994 properties being foreclosed on in 2015 alone. Over 8,000 of these properties are occupied. This is one of the largest foreclosures in the nation’s history, and will displace an overwhelming number of people.

“Houses are often stripped after families are evicted, which creates blight. The more we act collectively, the more we can defend,” said Babson. “If you are going to change policy, and these powerful government organizations, you don’t just fight them in court, you fight in the community and have a forceful presence in the streets.”