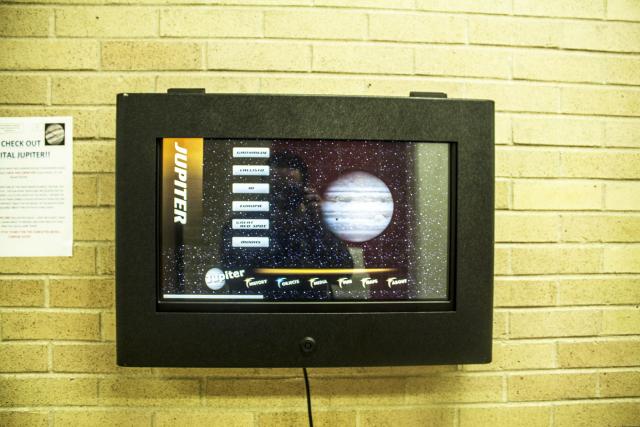 At Henry Ford College, students and visitors from all over will soon be able to enjoy a magical experience with the new hybrid scale-model solar system. The great unveiling is set for mid to late November.

HFC’s model incorporates the characteristics of being to-scale, digitally interactive, and walkable. Some models have one or two of these traits, but this is the first of its kind to master all three.

Students will be able to go up to eleven black, steel computers and interact with their starry, mystical screens. While the planets are to scale both in size and in distance from the Sun, you will be able to magnify the planets to a larger size and swirl them around with the touch of your finger tip. There are multiple tabs to choose from displaying media, entertainment, facts, and even interactive maps so that your planet-to-planet voyage will not leave you stranded on Mars.

Visitors can learn and play. For instance, did you ever wonder how long it would take to deliver a pizza to another planet, or what your age would be on the other planets compared to your age here on Earth? Well, you can find out by interacting with the touch screens. Professors Dr Brian Kirchner and Steven Murrell of the Science Division designed this project. They reached out to Business Intelligence Systems Analyst and CIS Instructor Professor Brian Stewart who brought on board his team of talented students. Professor Stewart credits his class of 15 with providing all the coding software for the project. The late Professor Dale Van Dorp contributed heavily to the audio portion of the project as well. This project is part of his legacy. The contributors’ diverse credentials came together to produce an emergent product, that no other college or museum in Michigan has accomplished.

In recognizing our ever-advancing technological age, Professor Stewart shares, “This is version one, and it’s sensational. But, there are already version two and version three revisions underway. There will be so much more to come.” Additions involve a QR scan box so that students with smartphones can download images and information from each kiosk as well as upgrades to the digital maps.

Each computer has a media link that takes you to credible online content for that kiosk’s planet. We all hear about new discoveries in space but it can be hard to find out more on our own. The internet is not the most reliable source, so part of the job the team took on was to make accurate information readily available. In addition to accuracy, the media will be constantly updated. Earth Science Professor Dr Kirchner exclaims, “If NASA’s probes take new photos of Pluto, we can load them right in. And, that’s fantastic.”

Professor Murrell adds that, “A book, video, TV, the web, they aren’t going to give the structural understanding this model does. Students can visualize how close some planets are and yet how far others are away because while some planets are steps away from another, others, they have to walk sometimes as far as a quarter of a mile to get to.”

In-house development and careful budgeting made it possible to share this exciting new hybrid scale-model solar system with the public for free. Come in November and accept your open invitation to witness this unrivaled achievement for yourself.