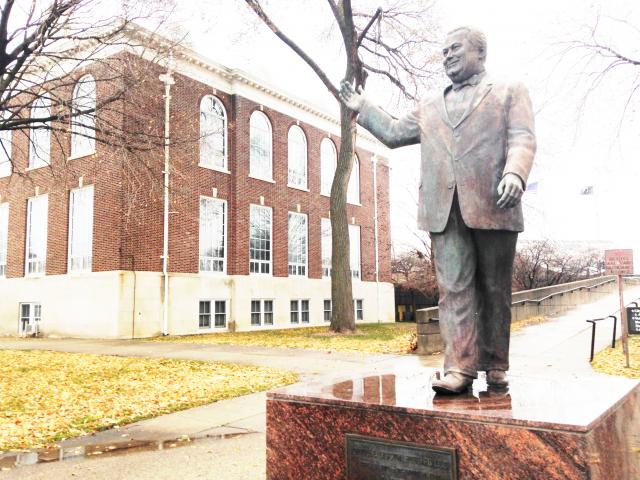 The Orville Hubbard statue outside of the former Dearborn City Hall was removed, but not for the reasons we might expect. Times have changed everywhere, but many of us are unaware of just how dras¬tically times have changed in the humble little city of Dearborn, Michigan. For the near decade that I’ve lived here, I’ve passed by the Dearborn City Hall on Michigan Avenue and Schaeffer almost daily, and outside that city hall stood a towering 10-foot-tall bronze statue of the former mayor, Orville Hubbard. Until just recently, I never had thought much of it.

The official statement from Dearborn’s current mayor, John B. O’Reilly, is that the statue was taken down and moved to an undecided museum since the land outside the former city hall is no longer owned by the city. While the Mirror News did contact the mayor’s office for more information, we were not able to receive any further comments from them at this time. However, Detroit News reporter James David Dickson cites Mayor O’Reilly as saying: “The history is set, it’s done, it’s fixed […] That’s not who we are today, or what we represent.” As Dickson further reports, “O’Reilly likened moving the statue to an historical museum with the removal of the Confederate flag from the capitol in South Carolina to a museum: Both Hubbard and the flag are ‘a part of history, a learning tool,’ but neither should be honored.”

As Jodi Rempala of the Dearborn Press and Guide reported back in July when the Arab American Anti-Discrimination Committee called for the removal of the statue, Orville Hubbard, who was the mayor of Dearborn for 36 years, beginning in 1943, was a very open and forceful proponent of separation of the races. Hubbard very openly spoke out against African Americans living in Dearborn and stated he would do everything in his power to keep them out. He stood by his words until he left office in 1978 and up until his death, four years later.

While many would agree that removing this statue seems like a good idea given the dark nature of the man it is modeled after, the official reason for its removal is a change in land ownership. Perhaps that kind of official reason will be what it takes to help the petitioners in Philadelphia, Pennsylvania, to have the statue of Christopher Columbus removed. An online petition at Change.org is calling on Philadelphia Mayor Michael Nutter to remove city monuments that celebrate the explorer.