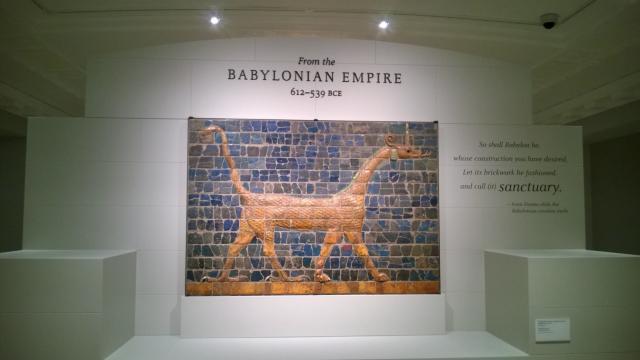 On October 1, the Detroit Institute of Arts (DIA) opened an expanded and revamped Ancient Middle East gallery which features a bevy of Middle Eastern artistry. For many locals, the DIA is a beloved gem of Detroit. It contains many exhibits from various places and times that span across continents. In the center of the gallery there is a piece from the Gate of Ishtar which came from the Babylonian kingdom of what is now Iraq. A thin, faded-orange dragon lies over blue tiled brick and appears to be massive to museum spectators. The display is illuminated by two small lights and includes a quote that reads “So shall Babylon be, whose construction you have desired, Let its brickwork be fashioned, and call (it) sanctuary.” The quote comes from “Enuma Elish,” the Babylonian creation myth.

The Middle East arts gallery has a variety of sections which are dedicated to different aspects of ancient life, such as metalwork, coinage, pottery, sculptures made from materials such as alabaster, and religious reliefs. The art in these sections range from pictures of goddesses to sculptures of heads and different currencies. Hashim Al-Tawil, a professor at HFC and a Fulbright scholar with a PhD in art history expressed that “The gallery shows the connections between ever-advancing technologies and sophisticated art forms during the rise of some of the world’s earliest civilizations and from the ancient empires of Assyria, Babylonia, Persia, Rome, and the Arabian Kingdom—modern day Iran, Iraq, Jordan, Syria, Turkey and Yemen.”

He also went on to explain that there are 177 artifacts on display for visitors to examine. Al-Tawil stated that “Another masterpiece is the relief sculpture of the Assyrian king Tighlath-Pilser III (745-727 BCE) receiving homage. This panel was originally in the palace of the king in Nimrud which has been destroyed recently by ISIS.” This does not mean that the Nimrud piece was under direct threat, as the museum likely had it in their collection long before ISIS existed, but it proves that the DIA is still playing a significant role in art preservation. The aforementioned artwork is tinged with grey and has a slight crack that runs down the middle. It also features the king with a long beard and a pointed headpiece, who is being greeted by another long-bearded nobleman with a look of contentment on his face. The men’s beards consist of little circular puffs brought together into a line; the use of circles is common in Assyrian art, as evidenced by other pieces in the gallery.

Through many of these pieces, the DIA is offering visitors a glimpse into the cultures of distinct groups of people from different places and times, all without leaving the contemporary setting of Detroit. This is a place where you can see flags commemorating the Muslim period of mourning, Ashura, right next to a Baptist church. This is what the DIA represents; a juxtaposition of different cultures in traditional and contemporary settings. Just above the Ancient Middle East gallery, there is a Contemporary Art section and an African American gallery that lies just across the hall from it.

Dr. Al-Tawil asserts that the Ancient Middle East gallery is “especially important for the students at HFC and the surrounding neighborhood in the Metro Detroit area because of the presence of Arab Americans who can connect their heritage with that gallery. Visiting museums is a healthy practice for it provides education and awareness of the significance of antiquities as record and archives of humanity.” Museums like the DIA preserve history so that people of all ages and backgrounds can appreciate the cultures of those who have lived in this world before them. The improvement of the Ancient Middle East exhibit is yet another reason for the people of Detroit to go pay the museum a visit.