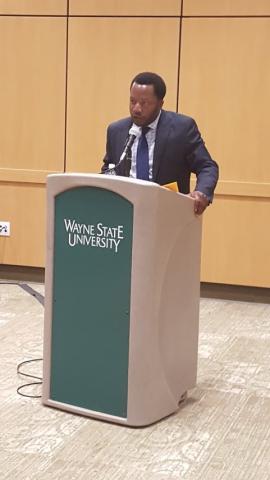 This is the second in a series of such summits taking place around the country. The first regional summit took place at the Pine Ridge Indian Reservation in South Dakota where the goal was to bring awareness to an incident in which 57 children from American Horse School endured racists slurs, being told to “Go back to the Rez” and were soaked with beer at a Rapid City minor league hockey game in January.

The trip to the hockey game was supposed to be a reward for the students’ good grades and behavior. Instead it became a trip through which they experienced the deep racism still present against Native Americans in South Dakota.

There was close to no coverage in the media on this racist incident, with the Rapid City Journal’s response being a story entitled “Did Native students stand for National Anthem?”. The Rapid City Journal later apologized for their divisively titled article, but this exemplifies the importance of the issues UNITY is trying to address with these regional summits. How do disenfranchised communities battle the shadows they are relegated to?

A facet of this question has been recently brought to the forefront of national news as one of the most respected Latino journalists, Jorge Ramos, was forcibly removed from a press conference by GOP presidential candidate Donald Trump for asking unwanted questions on Trump’s immigration policies. An account of the incident provided by ABC News, outside the press room shows a Trump supporter confronting Ramos telling him to “Get out of [his] country” when Ramos responds that he is a U.S citizen, the Trump supporter dismisses this saying “Whatever”.

This brought much debate on the matter of advocacy in journalism. Can a journalist take a stand and have more substantial reporting, or does this cross the line from journalism to activism?

In an interview with ABC’s George Stephanopoulos, Jorge Ramos stated that “As a journalist you have to take a stand. I think the best journalism happens when you take a stand and when it comes to racism, discrimination, corruption, public life, dictatorship or human rights, as journalists, we are not only required but we are forced to take a stand and clearly when Mr. Trump is talking about immigration in an extreme way, we have to confront him and I think that’s what I did.”

The discussions being facilitated by UNITY’s regional summits intend to give journalists who want to take a stand the tools necessary to succeed.
The UNITY summit in Detroit made resources accessible to people in the area who are interested in being those who shape the narrative of Detroit. Russell Contreras, President of UNITY, stated that the summit was about “us coming to show what’s available so Detroit can define themselves.” The summit included panels on newly assed census data on the Michigan Latino community, entrepreneurial journalism, investigative journalism, ethics in media, and a solutions-focused workshop addressing the media’s representation of the “New Detroit” which ignores long standing Detroiters and their needs.

Bankole Thompson, writer for the Detroit News, and host of “Redline with Bankole Thompson”(WDET-101.9FM), was the keynote speaker at the Detroit regional UNITY summit. In his speech entitled “Detroit’s Struggles are the Nation’s Struggles,” Thompson spoke of Detroit’s obituary in national reviews, “we’ve been told Detroit has died and died and died … Are they talking about the Detroit that we know, because the city that we know is one whose spirit has not been broken.” He went on to say that “advocating for diversity in the media is rewarding and it’s in the public interest. Being an apologists for diversity betrays the public interest … the history of every struggle or movement for advancement has always been rooted in the idea of the people in that struggle to speak out boldly like UNITY is doing. Holding their government accountable and those with the levers of economic power accountable to demonstrate what is in the public interest … History reminds us that these times call upon men and women who painstakingly use the influence of their positions to lead in the call for real economic diversity”.

Journalists have access to resources and the ability to tell the stories of people, communities and events that can produce lasting effects on society’s consciousness. With the absence of diversity in journalism, the narrative of struggling communities are shaped by the preconceived notions of the established media.

The next UNITY summit is set to take place in Tuscaloosa, Alabama on October 16. For more information you can go to unityjournalists.org.