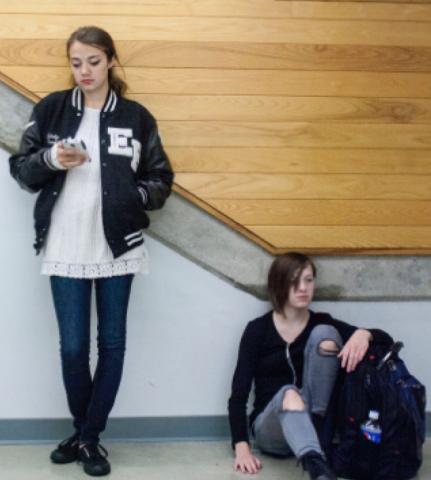 In 1981 a freelance writer for Rolling Stone by the name of Cameron Crowe went undercover at a high school in California. The articles were published as a book and eventually a film both titled Fast Times at Ridgemont High. An adult posing as a teenager to learn about the ways of the youth firsthand is an interesting proposition. Henry Ford College participates in another rite of passage defying proposition: on campus high school programs. High school students are able to enroll at the college and accumulate credits before they receive their high school diploma. There is even a program in which a student can receive an associate’s degree at the same time they receive their high school diploma.

To help clarify, there are a few different programs available at HFC. Dual Enrollment is one in which students are able to take classes both at their respective Dearborn public school and at HFC. This is the oldest program available. In Early College, however, students completely bypass high school and begin their freshman year on HFC’s campus. Collegiate Academy is the final and perhaps most peculiar track for a student. Collegiate Academy students begin taking classes on campus their junior year, but continue to be involved in their high school. Instead of graduating after grade 12, though, they continue for a thirteenth year. At the finish line, the graduating student will earn their high school diploma and an associate degree. Collegiate Academy is the newest program on campus and the first group of students will be graduating at the end of this school year.

Political science professor Dr. Eric Rader notes that he cannot always tell who is a high school student and who is a traditional student. “I am confident that it is a high quality program,” says Rader when reflecting on the work of Robin Armstrong who is counselor for the HFC Collegiate Academy. Armstrong describes her role as a “liaison between parents and students and the institutions, high school and college, to insure success for students.” “She doesn’t baby us,” says Collegiate Academy student Emma Mooradian about Armstrong. This appears to be true from her tone when conducting a parent student meeting that took place September 21. This is clearly a program for students who are serious about school or at the very least, parents who are serious about school.

While two of the programs skip some of the high school experience, Early College removes it entirely. For many, college is a relief from the time spent in high school. Students have more freedom to pursue what they want to in college and find friends that share common interests. While physically strong and more attractive students may rule the high school ecosystem, college is different and the temptation to push a good student into the Early College to avoid the horrors many recall of high school is understandable. “But that stuff is good,” says Professor Adam Hazlett. He is referring to the awkwardness and alienation of high school that is felt especially by more intelligent students, but to some degree – all students. Perhaps the bliss of finding oneself in college is not as sweet if one doesn’t struggle through the frustration and confusion of high school. Though Collegiate Academy and Dual Enrollment students still participate in high school, some students have reported that they feel disconnected. These programs offer a great head start in students’ academics, but do they miss out on an important rite of passage?

The maturity of some high school students in classes shared with traditional college students is a concern voiced by professors and students alike. Subjects involving sexuality can be difficult to discuss amidst giggles, though this reaction is generally the exception and not the rule when it comes to these students’ conduct in the classroom. Hazlett shares Rader’s difficulty in discerning the status of a student, which is a good thing. “When the students get to college, their biggest shock is that you don’t have to ask to use the bathroom,” Armstrong states. She goes on to explain that there is a course at HFC entitled College 101 that not only helps teach students how to be successful in school, but also deals with proper behavior on a college campus. Profanity, the faint (or not so faint) smell of marijuana smoke, and the occasional aggressively flirtatious students and staff are a reality on campus. “I tell my students’ parents, ‘college is an adult environment and, grades or not, if you think your child isn’t ready for an adult environment, they may not be ready for the program.’” Early College students eat in a sectioned off portion of the cafeteria, spend their first two years in a secluded basement of the Learning Success Center (Building A) and travel together across campus.

There are mostly positive reviews of these programs by staff. But there exists one consistent complaint among professors. Originally there was a cap placed on how many high school students could be placed in each classroom - two to eight students only. This kept the college environment intact according to Rader. Typically, the chair of the faculty senate will recommend policies to the board. However, an executive order was made to remove the caps, without input from the professors running the classroom. “This semester I have a class of thirty. Twenty-nine are high school students,” says Hazlett. He expresses that he is not worried about the future of the high school students so much, but does worry about the one traditional student when she finds out that she is the only student not also in high school. “Too many students from the same school in one class creates a cliquey environment. The cap kept students spread out,” Rader explains, “It can be a frustrating experience when a majority of a class are high school students.”

What would be the reasoning for removing the cap? First it’s important to note a selling point from the Henry Ford Collegiate Academy Website: “Students attending high school can earn BOTH a HIGH SCHOOL DIPLOMA and a 2 year ASSOCIATE DEGREE at NO COST to parents or students.” The capitalizations are their stylistic choices, but the statement raises a question. Then who is paying? Armstrong explains that HFC and Dearborn Public Schools have an agreement that works roughly like this: a high school student grants a certain dollar amount of taxpayer money to the public school. This money is then divided up between HFC and the school depending on how much time the student spends in either institution. So, a Dual Enrollment student may award half of their state money to the college, but an Early College student would give the college the entirety of that check. High school is required under the law, so these programs turn HFC into a compulsory college. The tuition is guaranteed, unlike a student who may be working a job or two to pay off their education. By removing the cap, HFC can get more guaranteed cash flow, even if it is a detriment to the quality of the classroom.

Some of the best students in a classroom often turn out to be in high school programs. I have noticed this in my classes and in observing a few of my co-workers on The Mirror News that are either Dual Enrolled, Collegiate Academy or Early College students. The vast majority of these students will go to four year colleges and surely have a bright future ahead of them. These programs are a nationwide trend over the last few years and offer an excellent opportunity for young students willing to take advantage. The education that these students are getting at the college may be better though they could be missing out on some of the lessons their high-school-only peers are getting. And since the cap has been cleanly removed by the administration, I will try not to be surprised if I find myself in a class of students that don’t understand my eighties movie references.