The VTL Sells Out Shows 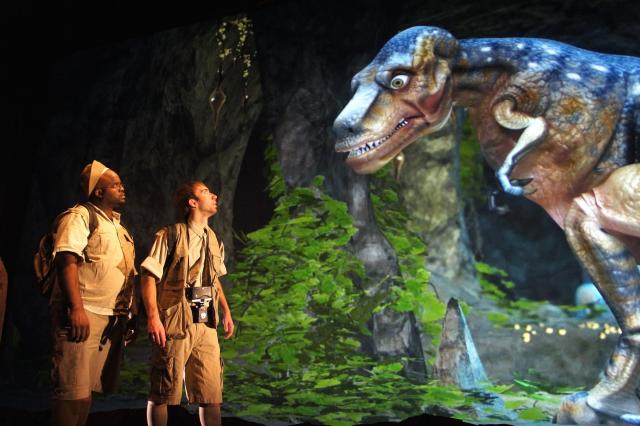 There is a certain magic churning behind the scenes at HFC. It lies in the last door on the right in the northern corner of the Fine Arts building. You have to go past the Sisson art gallery and the Pewabic pottery drinking fountain to find it. This is of course the VTL, or the virtual theatricality lab, which offers students with a niche for technology to excel and create a product that audiences may always remember. All of this has been made possible by the likes of Dr. George Popovich, the head of the program, and Alan Contino, a motion capture technician. Of course, the students in the program are vital to a successful performance.

The VTL pairs stage actors with motion capture (or mocap) actors on a stage in front of an audience. Mocap is a type of technology that captures the essence of an actor’s movements and projects onto a virtual being. This has been going on for a while and has been demonstrated to numerous audiences over the years, with projects such as The Tempest (2003), Skriker (2006), and Dinosourus! which was first introduced to audiences in 2014. The technology employed throws play-goers into an exciting experience, but it is also important to note the effect that this has on the campus; it benefits students greatly.

HFC student Joshua N. Cliff has experience with VTL software and mocap acting. Upon seeing the final result, when his performance and hard work had been put onto the screen, he said, “It was surreal… To see myself up there.” Cliff said this excitedly and moved his arms in exaggerated motions to mimic the actions of a mocap actor; showcasing just how terrific this opportunity has been for him.

It’s far from just the students who see how incredible this technology is, audiences have absolutely devoured this as well, bringing good press to both HFC and the VTL program. Dr. Popovich stated that “Dinosaurus! was sold out all but maybe one or two nights.” Impressively, it also broke HFC’s box office and attendance records for the theater arts program. People flocked to see this show, which means that people were also coming to HFC for something rarely offered by few other colleges, giving an upper hand to the school.

Moreover, according to Dr. Popovich, there is little glory for the motion capture actors and behind-the-scenes workers. In reference to the Academy Awards and critics alike, Popovich expressed, “They don’t recognize it as acting and they don’t recognize it as animation.” He then went on to quote Arthur C. Clarke, claiming that, “Any sufficiently advanced technology is indistinguishable from magic.” It is significant for the actors and equipment not to be noticed, it allows for a seamless production. In Dr. Popovich’s office he has a poster of The Invisible Man which is ironic considering that that title describes many of the workers behind VTL projects. A successful VTL experience is one in which mocap actors and the equipment make no appearance. They only see the motions that have been recorded and virtually projected, similar to Andy Serkis as Gollum in Lord of the Rings or various other titles; you only see the character he is playing. This suggests that the program requires students to have passion for the content and a drive to produce it.

VTL has won many awards and has been mentioned in various media outlets. It has won an award at The Kennedy Center’s American College Theatre Festival and been mentioned in The Detroit Free Press and Michigan Vue, bringing press to both the program and HFC. The VTL offers HFC a unique technology and provides students the chance to use mocap and coincide with traditional stage actors to provide audiences with something unforgettable, hence changing the climate of the theatre arts program.

More information can be found at vtl.hfcc.edu.