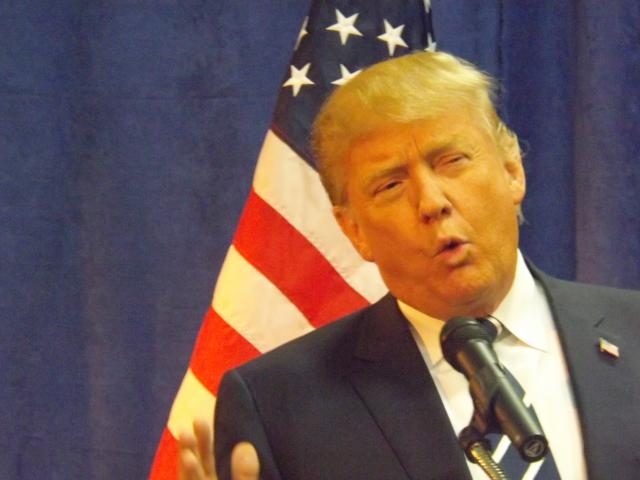 Arriving on site, protestors lined the sides of the street leading into the Expo Center and as we drove in, they were waving signs. “Circus today - SOLD OUT.” One had a quote from Trump disparaging people from Mexico, saying they bring drugs and crime, followed with, “I just brought tacos.” Another: “We will overcomb.” They were a diverse crowd. Young and old, women and men. I’d say they numbered about 50. They peacefully waved as we pulled in.
The signs changed as we approached the front doors. “Donald Trump - SOLD OUT” lit up the large LED sign outside the center. “Vets for Trump.” “Trump for President - All others are apprentices.” Clearly, non-supporters did not purchase tickets for the event, starting at $25. The people here were on board. They wanted to hear what the man himself had to say.

Once inside, we were greeted by the smell of cinnamon. Roasted almonds were being sold to guests, as well as Trump’s memoir, “The Art of The Deal”. For some reason I had not expected concessions for an event like this, but there you go. We were ushered in.

Grandstands lined either side of the space, filled with what I estimated was roughly 1,500 people. VIP seats, priced at $125, along with the media were seated right in the middle. A man on stage played “Escape (The Piña Colada Song)” acoustically, over the din of voices in the crowd. The group was not entirely homogeneous, but I will say that older Caucasians dominated the stands.

We shifted to the media area in the back, where Mr. Trump would take questions before heading out to speak with the crowd. My companion and I sat down. News people surrounded us. I remember thinking to myself that I wasn’t so different from them. I was younger, and my suit probably cheaper, but here we all were. Public radio, local TV stations, another college paper… All crowded into a tiny space, holding our smart phones and microphones, waiting for Trump to arrive.

And waiting. And waiting. Traffic delays, we were told. I believe Tom Petty may have sung a song about it. The waiting is the hardest part. I idly wondered if the acoustic guitarist would play that next for the anxious crowd.

As we waited, we kept to our seats and made small talk. Well, most of us did.

“Who let these kids in here?” A voice questioned, clearly hearing the chitchat among us college students in the third row. There was Charlie LeDuff, patriotic cowboy boot enthusiast and Pulitzer Prize winner. He was excitable. Flitting from person to person, he was tapping his foot and showing people something on his smartphone. In a room of people clearly growing restless and impatient, he was the rambunctious toddler, unable to contain himself and seemingly unaware of where he was. His energy is slightly uncomfortable, given the mood in the air.

LeDuff shook our hands and asked where we were from. He talked about what he was going to ask Trump. He mentioned his reporting. He jumped up at one point and peeked through a blackout curtain, pondering the barrier. I encouraged him to slip through, but he did not take me up on it. A shame.
Finally, murmurs and shuffling as Trump walks in the room.

For a second, it feels like I’m watching TV. Just a few feet from me is Trump. He is in living color and it feels surreal. This is the republican front-runner. This is happening now. There’s a collective pause before someone with better initiative than the rest of us jumps in with a question.

The topics are all over the place. Trump thinks that China doesn’t respect us; it believes “idiots” run the U.S. When asked for an opinion on Detroit’s bankruptcy, he doesn’t really give one. In his eyes, tensions in race relations are an employment problem to be solved by more jobs. He’s asked for specifics on his presidential plans and promises we’ll see plans. Then Trump moves on without sharing any details. When asked about his comments about Mexicans and women, Trump says he’s polling great with them.

“I cherish women.” are his exact words.

LeDuff finally gets an opportunity to ask about the wall between Mexico and the U.S. This is a topic that has netted Trump a lot of support. LeDuff explains that the wall is proposed to be 30 feet tall. “Home Depot sells ladders, made in China, 32 feet tall. So how tall is this wall gonna be?” Trump ignores the question and uses it as a jumping off point, no pun intended, to talk about the wall. Later, LeDuff offers himself up for vice president, though Trump is not interested in his resume.

And just as suddenly as it started, he’s wrapping up. He’s got a crowd ramping up for him. We finish our notes and head out for the main event.

It’s like a rock concert. Everyone is on their feet and cheering. The speakers are blaring, “You’re the Best Around” from the Karate Kid soundtrack. The bodies and noise makes me feel like U2 should be coming out, but it is Trump. No remarks on note cards, no prompter. He knows exactly what he is going to say.

Trump recaps a lot of what he shared in the press conference about Mexico and China. He mentions the wall and the room erupts. There’s clapping of hands and stomping of feet as the room rises and chants “U-S-A! U-S-A! U-S-A! TRUMP! TRUMP! TRUMP!” He boasts that if it weren’t for him, we wouldn’t even be talking about illegal immigration. I think there are certainly people who have been discussing it, even before he was running for president, though maybe he can only see people who make over a certain annual income.

Trump moves on and discusses other candidates and the presidential race. I start to jot down notes about Jeb Bush, when Trump changes topics. “And the media,” Trump gestures to the media area in the center of the room, “they’re scavengers.”

Now there’s booing and wailing at us from all sides. Trump piles on and says, “The media doesn’t tell it like it is”. The room is again filled with the sounds of stomping and cheers. “It’s a hell of a crowd,” he remarks.

I spin around and look at the room. The feeling that I am lumped in with a group that the audience views so disdainfully is suffocating. I am not excited anymore.

If I could, I’d explain. I’d say that I’m a member of a college newspaper. We don’t have million dollar advertisers to appease or pundits to feed. We don’t have spin zones or situation corridors. I’m just a lady in a cheap suit wondering what these people see in this candidate. I was hoping to talk to them, but now that they were actively jeering us with such ire, I didn’t think I’d be able to have a conversation about the nuances of their political agendas.
Trump spoke about his critics. He talked about Iran. He boasted about his wealth, which is something pretty ballsy to say when you’re talking to a room of people who paid to hear you speak.

Someone from the crowd raised up a copy of “The Art of the Deal”. “That’s my second favorite book of all time. Do you know what my first is?” Trump perked up, “The Bible!” Please try to understand the depth of how impersonal and fake this proclamation felt. Even the sweet, saccharine smell of the roasted almonds could not compare with this manufactured statement.

We began to move towards the exit as he started the conclusion of his speech. Trump mentioned taking care of veterans. The crowd once more rose to their feet, cheering and clapping. I stopped and joined them.

While I might have personal feelings about any number of topics he spoke about, my job was to try to be objective. Observe and report. But who doesn’t clap for the troops? Suddenly, I was with them. My perspective shifted. As a country so deeply divided, couldn’t we all start with this? The one thing we share in common; respect and admiration for those in uniform.

It was on this thought I decided to close my notebook - that there were still topics that unified us all as Americans. Over the course of the evening, I observed so many people with strong convictions about topics that fracture the country. To have a candidate that seriously encouraged that “us-versus-them” mentality, separating us into losers and winners, really felt unfair. I liked the idea that even after listening to over a half an hour of that, we could all still agree on something.

We walked out with the crowd into a lovely summer evening. I wish the pleasant feeling could have lasted, but as people moved to their cars, all known traffic laws went out the window. Even Trump’s motorcade raced out on my left, ignoring the traditional flow of a roundabout. His supporters quickly followed suit.

There I sat in traffic, being cut off, waiting with the throngs of cars leaving the event. We passed by a last lone group of protesters, waving a rainbow flag with pot leaf in the middle, and I thought back to the words of “Escape (The Piña Colada Song)”. A man is tired of his relationship with his lady. He takes out a personal ad, which is ironically answered by his same lady friend. Trump’s appeal is that he’s not the “same old dull routine”. This is why he’s resonated with people. They’re all waiting with high hopes. We’ll have to wait and see what the next verse has in store for his supporters.