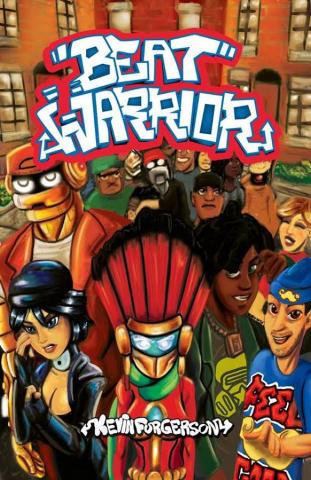 Listen up! I had the pleasure of interviewing local comic book artist Kevin Furgerson about his webcomic series “Beat Warrior.” My good pal here is a Detroit-grown breakdancing enthusiast, and his comic is full of hip-hop inspired funkiness.

Let’s talk about your comic book.

So basically about these characters who get hip-hop based superpowers called “Rhythms” and that the main heroes have to fight against different factions that would abuse it, like DJ Death who samples souls into mixtapes to amplify his power. And the powers come from breaking, mixing, lyricism, and graffiti.

So you’re saying their powers can be amplified, or expressed, by these actions?

Well it flows through with those abilities. Like the Five Elements of Hip-Hop like Breakin’, MCs, Graffiti, DJs, and Knowledge.

So what about Beat Warrior?

Well, Beat Warrior is the Hero of the Funk, Enemy of All that is Wack.

Wow, Hero of the Funk, Enemy of All that is Wack. I really love that.

Yeah, and you got your regular bad guys too. Like Syntoseid, who made this big empire in another planet or another universe who made it his entire purpose in life to nullify, or synchronize, the universe. Or Barracuda, this ancient Aquarian musician who has her own cult. And it reflects the cult of personality with many modern musicians.

So Beat Warrior is taking back the music and bringing it back to the people.

Well yeah. Pretty much Beat Warrior and the Beat Crew’s goal falls in line with Hip-Hop: Peace, Love, Unity, and Having Fun.

So, what inspired you to write comic books?

What inspired me to write comic books is that it’s really an autonomous art form, in the sense that you’re working by yourself. Not only that, but I feel the use of visual and narrative is more in depth than they are alone.

So you would say by being able to do the writing and the art you have control over your world and your vision is presented clear?

Yes, but I would also say that it is open for collaboration without there being too many cooks in the kitchen.

Cool, now let’s go into what inspired you to draw the way you do and develop your characters?

What inspired me to draw Beat Warrior was Hip-Hop culture, particularly how it interacted with comic book culture, like Wu-Tang Clan and MF DOOM for example. Not only that I was inspired by breakin’ culture.

Breakin’ as in breakdance culture?

Yes, as in b-boy or b-girl. The eccentricity, the flare, kind of reminds me of superheroism in a realistic way.

So, what is your future plans for Beat Warrior?

Well the endgame for a lot of webcomics is to get published on its own merits, whether it’s through Kickstarter or Patreon, or something like that. And there are some webcomics that have gotten their own series, like AxeCop, and China, IL counts too.

I wanted to ask you something because this article is about local comics and comic book artists. Has your home life affected your comic in any way?

Well I feel like the comic scene here in Dearborn is really pushed towards the independent comic artists and graphic novels. Scott Pilgrim is popular comic, for example, and Watchmen and all that. In terms of my area affecting me, and my style, I’m particularly affected by the breaking community.

Right, so you’d say Dearborn has a strong breaking community?

Well Detroit does, and the Metro Detroit area. Because things are more globalized, like with the coming of the internet, I could say the marks of my style are more or less universal, like vibrant colors and high contrast. They can also be traced back to more retrospective styles. One work in particular that has influenced me is Hotline Miami.

Would you say character perspectives are an important part of your comics?

Yeah, I would say that diversity is an important part of my comics. Breakin’ and Hip-Hop culture is very diverse, multicultural...

Has anyone approached you to make a comic with them? As in doing the art for them and they do the writing?

Awesome, awesome... So if another artist from Dearborn and Detroit was trying to make a comic, what would you share with them?

Well I say always keep adding to it and always conceptualize. World Building is key, understanding the laws of your universe is how you make a good story.

What is the best way to get someone’s comic book out there if they’re starting out? Like you said your comic book is online, right?

Well yes, certainly, that is almost standard these days.

So you have your site up right now?

Well right now my site isn’t up, but I’ll have it back up this year. Right now I’m posting my comic on DeviantArt at kevfu.deviantart.com.