Life After the NFL 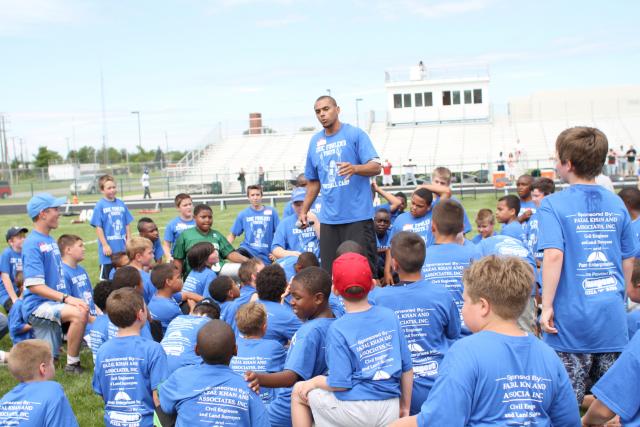 Former Detroit Lions wide receiver, Eric Fowler, is no stranger to Dearborn and Downriver. When asked about his local ties to our community, Fowler playfully retorts, “I-94, exit 206, I know that exit well… Plus, my Tax Agent lives in Dearborn, my former Sports Agent Tom, I was over at his house all the time... Tell you what, the best burger I ever had was at Millers Bar on Michigan Avenue. That place is really under the radar.”

Fowler’s Sports Agent may ring a bell, perhaps you have heard of Dearborn Council President Thomas P. Tafelski. The directions Fowler is spouting off from memory lead straight to the Detroit Lions Training Camp Headquarters in Allen Park. Among further recollections, Fowler remembers Andiamo Dearborn’s Grand Opening. Of course, he has succumbed to their legendary steak.

In this exclusive interview, we follow Fowler’s inspirational story from pre-NFL to post-NFL. His pay-it-forward personality illuminates and we are introduced to the team he now plays for, a team that doesn’t run the ball but runs the country with biomedical technology.

Eric Fowler was born in 1984. Fowler’s High School graduating class was a mere sixty-seven students. It was Fowler’s older brother, Donald, a collegiate ball player that was his role model and inspiration to play Football at a college level.

Fowler encourages finding a positive role model and mimicking them to see if following those footsteps leads to the same fortunes following as well. From around age eight, Eric would go to visit Donald. He laughs as he remembers how he would run around all over the place up there. Eric’s visits continued until around the age of sixteen. Fowler recalls that his brother would take him around and introduce him to everybody. He would even take him in the Locker Room to meet all of the players.

Fowler conveys that this mentorship made the move from the small village of New Haven to a much larger populated Allendale rather smooth.
He explains, “Athletics gave me a sense of family away from home. I showed up to Grand Valley State and already had 50 brothers there on the team. It really made the transition from a village to a University of 23,000 students relatively easy.”

Eric believes that playing college football was part of what shaped him into the man that he is today. He professes, “I am blessed to have participated in collegiate-level sports. It’s a gift to have such an opportunity. It taught me fundamental discipline, teamwork, work ethic, and group solving. These things can separate you in a very positive way in life post-college.”

In paying it forward, Fowler has some advice for students going on to play collegiate football. He advises, “Keep your head in the books and focus on the academics. As for class work, education is the reason you’re going to college. Athletes that get an academic scholarship have a better chance of making teams because it didn’t cost the team any of their athletic scholarship money. More importantly, if you get hurt or have a sports changing injury an academic scholarship stays with you regardless. Whereas, if you are attending the college purely on an athletic scholarship, there’s a good chance that the scholarship will end with the injury.”

He adds for all students, “Life is about finding the opportunities so you can take advantage of them when you are ready. It’s not all right choices all the time; it’s learning from the mistakes too.”

Fowler’s talent sailed him beyond the collegiate level and into America’s National Football League. His career spanned from the Pittsburgh Steelers, to the St. Louis Rams, and back home to the Detroit Lions.

Fowler put Grand Valley State on the map with his success. They had a soccer field to practice in before Fowler’s NFL debut. Since then, there is now an indoor practice facility, astro-turf, and a gigantic Jumbotron.

It is one thing to root for a small town underdog that makes it into the NFL. But, it’s Fowler’s post-NFL role in the medical community that brings a whole new plenitude of cheers and perchance tears.

Fowler presently works for the Musculoskeletal Transplant Foundation. This nonprofit organization has national recognition as the largest tissue bank in the country. Fowler explains that the Foundation takes tissue donations, deems if the tissue is safe, if so, processes the tissue, and finds patients all across the nation to be supplied with that tissue.

The Foundation also specializes in Biological Breast Reconstruction and Abdominal Wall repair. Part of Fowler’s position is to work with General and Plastic Surgeons to come up with Surgical Solutions for their patients.

Fowler attests that he is a fair representation of all these men that we never hear about. He explains, “Our actions don’t make the headlines. We are humble guys. But, we are out here. We do exist.”

Fowler’s career entails traveling constantly across the country. Fortunately, the NFL has sparked a love of traveling in Fowler. He loves his job, loves helping people, and it doesn’t hurt that he met his wife a few years ago at a Christmas party for work. In fact, Fowler just recently tied the knot on Dec. 13, 2014. They waited, and timed it perfectly.

Eric warmly chides, “It’s the last sequential date of our lives”. This is true, being it is the last sequential date of the century. He pauses and then shares, “I waited a while to get married because I wanted to have the rest of my life in order. My mentors in college told me while you have the ability to work hard, work hard. All that other stuff falls into place.”

Several months after their wedding, Eric and his wife just now got around to their honeymoon. They are so active in the medical community, and so passionate about helping people that this delay wasn’t a real surprise to either of them. He divulges, “She makes me a better person. She is a great teammate and partner in life.”

Most of Fowler’s traveling is work related. But, he has made a New Year’s Resolution in the last couple of years to leisurely travel outside the country twice a year with his wife. He knows the resolution won’t be easy. But, as you may have guessed, he is ready to put in the work.

This won’t be the last we hear from Eric Fowler. His inspirational words are only surpassed by his inspirational actions. Number eighteen on his Lions Jersey, but number one, in our hearts.