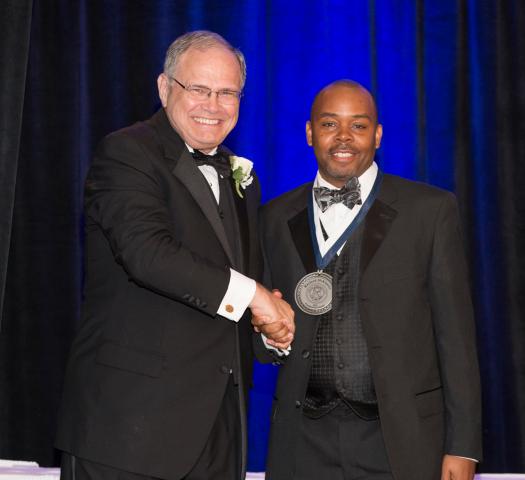 The Henry Ford College community gathered together on May 16th for the first annual President’s Gala. The event, at the stately Fairlane Club, held 195 guests for the evening. Attendees included local dignitaries such as Mayor of Dearborn John B. O’Reilly, Jr. and HFC Board of Trustees along with Dearborn Public Schools Board President Aimee Schoelles, as well as many of HFC’s faculty, staff, donors, community leaders and foundation partners. All gathered together to reflect on the accomplishments and generosity of those being honored at the evening’s festivities.

A. Reginald Best, HFC’s Vice President of Development, served as the evening’s master of ceremonies, sharing that the event was a chance for the college to come together and see what is happening now and what great things lie ahead for HFC and its supporters. There were several presidential honorees awarded throughout the evening, each with a compelling commitment to the college.

George Bednar was the community leader being honored for his long standing relationship with HFC. Mr. Bednar raises scholarship funds through his involvement with the Henry Ford College Mike Adray Memorial Golf Tournament. This tournament has raised over $1 million since it began and Mr. Bednar strives to raise even more in the future.

The major contributor celebrated was Donald Dodge, who has watched HFC’s impact on our community over the years. Mr. Dodge started a nursing scholarship in 2001 in honor and memory of his wife. When accepting his award, he reminded us that, “Students are our extended family.”

Lynn Borczon was commemorated for her efforts and support as an HFC staff member and Gary Heinz for his generous role as HFC faculty. The community group recognized for their contributions was the Garden Club of Dearborn.

The Garden Club, to the delight of all the night’s guests, coordinated a surprise source of support for the HFC Telecommunications Program. The Video Production II class created a video profiling the gala’s honorees and the Garden Club. The Club, after working with the students and observing the equipment they used, voted unanimously to provide $2,500 for a lighting kit. The students and instructor Dr. Kimberly Conely were elated. Dr. Conely smiled as she looked back on the gesture, saying it was “so appreciated” and that “it will be put to good use!”

Notably, recent HFC graduate Rayford McKinstry was awarded the first Presidential Scholarship, billed as the most prestigious scholarship opportunity the college offers. The scholarship goes towards his continued education at Siena Heights University. McKinstry’s eloquent acceptance speech expressed how appreciative and thankful he was and spoke to his commitment to give back to his community.

All of those honored were universally regarded as critical parts of the success of the students and educational experience at HFC. As HFC College President, Dr. Stanley Jensen, reviewed the evening, he spoke to his experiences two years ago, when the college was in a transitional state. He said he started signing his emails, “Great things ahead” as an optimistic gesture. Having seen what this community has accomplished and what we have planned for the future, all in attendance knew the sentiment holds true. With musical accompaniment by the Henry Ford College Big Band, the attendees took to the dance floor and concluded a wonderful evening.