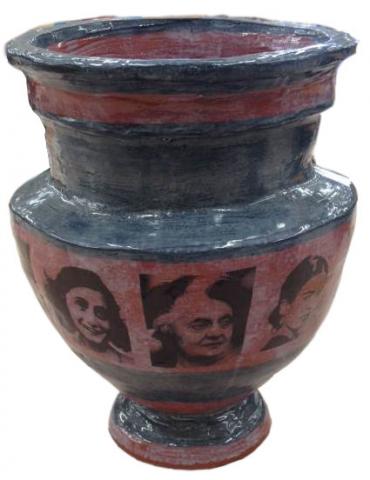 The Pottery of Victoria Peruski

Most people fail to see a connection between the arts and sciences – seeing the arts as more emotional and the sciences as being all about what’s in your head. Victoria Peruski, currently an honors student planning to receive a degree in neuroscience, has connected the two through psychology and studying human behavior. She says that “art expresses our emotions. Art expresses what those biological factors are doing to us – the biological factors that make us who and what we are. We can better visualize how we view not only ourselves, but society.”

This mindset led her to the pottery works of the ancient Greeks, where they would document their lives on vases, similar to how we document our lives in journals. With this image in mind, Peruski decided to try her hand at making her own Greek-style pottery, managing to create three successful takes on the ancient form. Her first vase featured images of female icons Anne Frank, Frida Kahlo and Rosie the Riveter that were photocopied onto the vase.
Her next was a bit more complex in terms of imagery. This time she centered her work around President Barack Obama and the historical black figures she believes Obama would have seen as role models, and painted their likenesses onto the clay.

Peruski’s third vase was created to represent what she believes “society sees as their current ‘god’”. That current god is technology, and it can’t be denied with how reliant we’ve become on everything from our cellphones to an open Wi-Fi connection when we’re out and about. She decided to show an image of people sacrificing their technology in a similar way that the people of the ancient world would sacrifice the best their community had to offer. This is seen in the focal point of the vase where a group can be seen holding a large pit like object where different “app” styled technologies are shown falling into it.

Prior to the creation of these vases, Peruski had little background in ceramics. And surprisingly, she says that it involved quite a bit of teamwork with her instructor, HFC’s very own Professor Glazer, and, not surprisingly required a lot of discipline. If you find yourself itching to take a class, don’t let thinking it won’t fit in with your major stop you! The skills you’ll walk away with outside of the artistic ones, discipline and patience being two of them, will be beneficial all throughout your life. So, if you find a free spot in your schedule for the upcoming semesters, why not take a ceramics class? You might find an interesting connection between it and your major.