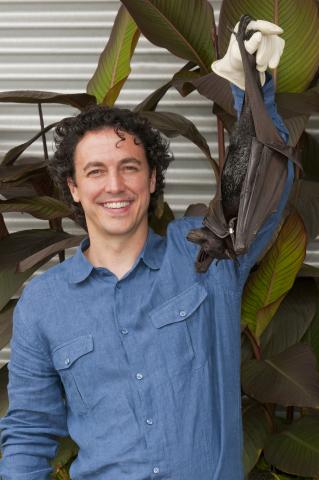 Photo published with permission of Rob Mies, Executive Director of the OBC

Black wings beat effortlessly through the night sky, swooping down to catch mosquitoes and moths. You gaze up and wonder, “Is it a bird? Is it a plane?” No, it’s a bat!

Bats are the only mammals capable of true flight and can reach speeds as high as fifty miles an hour. According to an article by Jennifer Laaser called “DNA Research Sheds Light on White-Nose Syndrome in Bats,” these creatures are found on every continent excluding Antarctica.

There are two main families of bats, microbats and mega bats. Microbats are smaller and use echolocation to catch prey and avoid objects in the night sky. Despite relying heavily on echolocation to maneuver through the night, they can see through their eyes fairly well, hence debunking the myth that bats are blind. Mega bats, commonly referred to as flying foxes, are larger and do not use echolocation; instead they rely solely on their eyesight as stated in the article, “The Importance of Flying Foxes.”

Rob Mies, executive director of the Organization for Bat Conservation (OBC), has made it his mission to educate people about bats. He explains that the myths surrounding bats were created out of ignorance. Due to the lack of knowledge about these animals, people made up stories and passed them down from generation to generation. Since bats are nocturnal, it was easy for people to vilify them into monsters. Mies concludes that one of the best ways combat this negative stigma surrounding bats is to spread the word about their ecological and economic worth.

Throughout the world bats are seen as dirty, dangerous and evil, although this couldn’t be farther from the truth. For one, bats are very clean animals and groom themselves and their young in the same way cats do. Additionally, they are not aggressive animals and will not attack a human. All bats in Michigan are insect eating microbats no larger than your hand.

Bats are not evil, but in fact do wonders for the ecosystem and economy. Rob Mies also states that by controlling the insect population, bats save US farmers 53 billion dollars annually. They also pollinate many species of fruit and are the only pollinators of agave, which is what tequila is made from. Moreover, they are also responsible for bringing back the rainforests by spreading the seeds of the fruit they eat.

Bats seem to be misunderstood creatures that are vital to the global ecosystem. Mies stated in an interview, “When you bring a little bat to a school you’re changing culture.” And that’s exactly what the OBC is doing. In an effort to get the word out, the latter has teamed up with the producers of Batman V Superman: Dawn of Justice to produce a short video featuring Ben Affleck and Amy Adams called Save the Bats. The video discusses the importance of bats worldwide and the many threats they face.

One of those threats is white-nose syndrome, an invasive fungal species from northern Europe that has made its way to North America. White-nose syndrome is responsible for the death of close to 10 million bats in 25 states and five provinces according to Mies. Recent progress has been made to treat the syndrome in bats; biologists are conducting trials using bacteria that will hopefully keep the fungi that cause it in check as Mies discussed in the interview.

Other than spreading the word about bats, there are other ways for individuals to help them. For one, building and putting up bat houses provides a great place to safely raise their young away from predators. Planting trees and gardens with native plants without pesticides will also help bat populations. Trees provide additional roosting places for them, and native plants and flowers attract the insects they eat.

For more information, or just to visit the bats, the “Bat Zone” at Cranbrook Institute of Science is open daily from 12:30pm until 2:00pm over the summer. One can also head over for the Cranbrook “BioBlitz” occurring on August seventh and eighth. Taking a “Bat Walk” at sunset is also possible during Friday and Saturday evenings throughout the summer months at the “Bat Zone.” Furthermore, one can attend the Great Lakes Bat Festival, September 25 and 26 at the above mentioned institute.

The “Bat Zone” at the institute contains a variety of information and allows for many opportunities to help bats within the community. Rob Mies and the OBC are changing the culture surrounding them. Together they are combating ignorance with facts and giving bats a fighting chance.