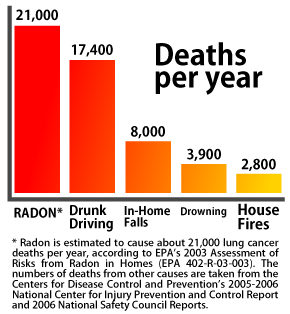 According to the Environmental Protection Agency (EPA), it’s estimated that, “About 21,000 lung cancer deaths each year in the United States are radon-related. Exposure to radon is the second leading cause of lung cancer after smoking…Radon is now thought to be the greatest cause of lung cancer among nonsmokers in the United States” (United States). Furthermore, there are certain regions in the U.S. that are more at risk for radon exposure. South Eastern Michigan is in the highest risk zone of the three zones that the EPA has listed. The EPA shares some statistics in relation to radon deaths versus other deaths in the home and close to home. While 17,400 deaths annually are from drunk driving and 8,000 from falls in homes, the leader of deaths from in or around the home is radon exposure. Radon’s 21,000 estimated deaths a year total more than falls in the home, drownings (3,900) and home fires (2,800) combined (United States).

So, what is radon and where does it come from? Per Gary J. Schrobilgen’s article in Encyclopedia Britannica, “Radon is a heavy radioactive gas generated by the radioactive decay of radium. It is 7.5 times heavier than air” (Radon). Unlike light gases that will float away, radon stays put. Radon stays right there in your home where it will wreak havoc on your lungs. Radon enters through the basement and without proper removal will remain there. On a scientific level, Schrobilgen discloses, “The atmosphere contains traces of radon near the ground as a result of seepage from soil and rocks…Radium occurs as a natural decay product of uranium present in various types of rocks…Radioactive decay of uranium in minerals, especially granite, generates radon gas that can diffuse through soil and rock and enter buildings through basements and through water supplies” (Radon). This explains how radon enters the home.

Despite Radon being recognized as a potentially significant health hazard for the last thirty years, there is little to no awareness of this serious health risk or the affordable prevention and detection of radon in your home.

Websites like LungCancerCause.org feature preventative measures homeowners can take, radon test options, and testimonials of victims of lung cancer due to radon exposure. Founder of the Lung Cancer Cause organization is Jessica Miller, she travels all over the United States to proactively spread awareness. Miss. Miller has been interviewed by news stations, radio stations, and has had her publications in magazines such as a recent publication in Heart and Soul Magazine. When asked what disheartens her most about the lack of knowledge and awareness in the community, it was hard for Miss. Miller to narrow it down. She relays, “Well, the fact is, there are an estimated 8 million homes in the United States that are currently contaminated with radon gas---and the home owners have no clue.” That is 12% of all homes in the U.S. She then interjected positively, “But, my goal is to let people know that yes, we have an epidemic on our hands, but YES we have a solution—we have preventative measures that can be taken.”

One preventative measure that the Lung Cancer Cause organization is very enthusiastic about is that homeowners have their home tested for radon exposure. Covering 2/3 of the country, including Michigan, SWAT Environmental is one these companies that test for and remove radon in buildings and homes. Radon mitigation specialist Jamey Gelina, President of SWAT Environmental, informs, “The testing kit, the lab fee, analysis, and shipping are all included for just twenty dollars.” All the owner has to do is set up the kit in their home and let it sit for three days before shipping it back out to the company. It’s such a low cost and low hassle that could possibly save millions of lives.