Race Riots of Detroit and Ferguson 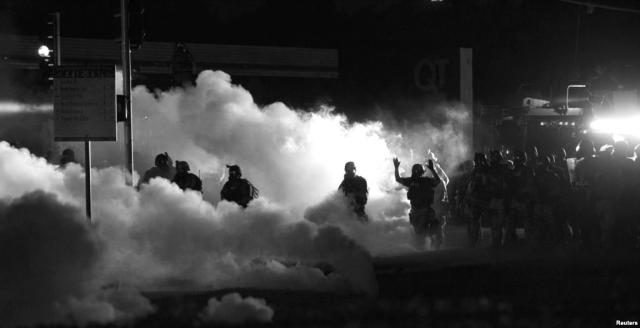 Communication between blacks and whites, what went wrong? 43 Americans died in the Detroit riot of 1967 only 10 were black. The police went to 12th Street in Detroit to raid an after hour spot, but found no liquor, only 6 cases of beer. The crowds formed around 8 police cars as the people in the upper room of the Blind Pig after hour alarmed the community. The crowds grew larger shouting, yelling, throwing rocks, and bottles at the police. Some Blacks targeted white businesses busting out windows, stealing merchandise, and setting them on fire. The fires started on 12th Street, then to Grand River, and more on Linwood, Dexter, Lodge Freeway, and Kercheval.

African Americans were possibly expressing frustration of not having equal rights, self-esteem, treated with dignity, and not allowed to express their manhood and to be respected by what was in 1967 a predominantly white police department in Detroit. African American’s may have been protesting to exercise their right to freedom as a means to get the government to see they wanted the same equality of life as the white man. The riot initiated by the African American’s was their way of demanding respect by the police by shutting down the city of Detroit in 1967 by blocking streets, destroying city blocks, homes, and businesses.
African American’s wanted the same equality as white’s had. The frustration, pain, and anger they were experiencing from their living conditions you could see on their faces. Overcrowded communities, broken homes, no resources to assist the low class that were forced to live in poverty, having the freedom to live and be equal as their fellow man. The African American’s that lived in the communities that worked hard to buy their homes were scorned by those who didn’t have, looked at them as Uncle Tom’s. As a whole the African American’s fought for freedom, justice, and equality of life, but they didn’t have confidence in the government due to the government failing promises that they would provide means for the low class living conditions and never fulfilled those promises.

In Ferguson 2014, angry African American’s outraged at the grand jury’s decision to not find Officer Wilson guilty for killing Michael Brown protested in front of the Ferguson Police Department, setting police cars on fire, the crowds yelling, “No Justice, No Peace”, throwing bricks, and bottles at the police. The SWAT Team was on the scene firing tear gas at the protesters, and shooting rubber bullets. Protesters were running to get to their cars to leave and avoid being hit by the rubber bullets. The SWAT Team were shown on video setting fires using tear gas to start fires on businesses and cars where there were no protesters. The protesters rioted out of irritation of the police killing African American’s and not receiving any consequences for their actions. The same dissatisfaction expressed during the riot in Detroit 1967, Ferguson rioted for not being respected, treated equally by the police, and the government for not holding Law Enforcement accountable for police brutality in killing African Americans. Ferguson demonstrated their anger and outrage using their First Amendment right to protest against the police department for racial discrimination and targeting African Americans in unjust killings.

The people of Ferguson peacefully protested during the Wilson and Brown trial that lasted for a 100 days. Protesters voiced that the police are only for the government’s protection, not the citizens when African Americans are being killed by police at an alarming rate. “The 1,217 deadly police shootings from 2010 to 2012 captured in the federal data show that blacks, age 15 to 19, were killed at a rate of 31.17 per million” (“Deadly Force in Black and White” Propublica.org).

Ferguson wanted to be heard and acknowledge as a community, to be treated equally and fair, to have the freedom to live and not be in fear, to be respected as human beings, to have the same quality of life; the same echoes of what happened in Detroit 1967 expressing ongoing frustration over racial inequality. Detroit is still having to deal with the racial inequality that led to that civil unrest; while Detroit is starting to rebuild its downtown and neighborhoods, government officials will keep in mind the need to address the racial inequality that was so dramatized by both Ferguson last year and the civil unrest in Detroit in 1967.