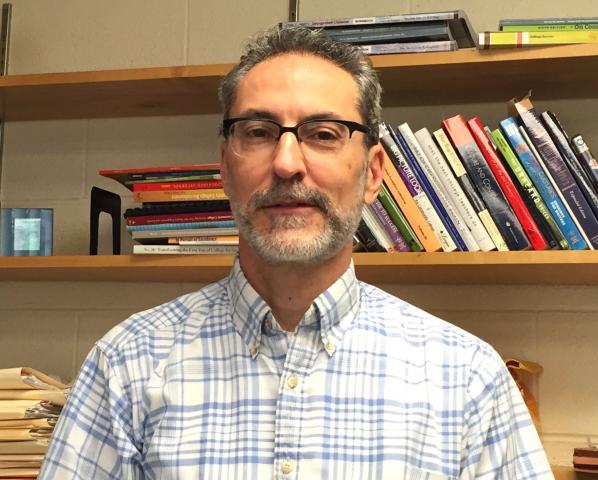 Haha, yes I do have a book in mind that I’ve been working on lately. It’s hard as a writer to go, I’m afraid, there’s like a container that we write out of, if I leak too much, it will, sort of, depress my container. But it’s something I haven’t done much of, it’s more of a personal piece, a memoir piece.

It will explore my relationship with, what I call, “the other”. Being a white, middle-class, American male, there’s a lot I need to understand about “the other”. I’m sort of the person who luckily or unluckily was bestowed with all these privileges and so, how do I relate with a world out there that’s not me?

Yes, exactly. My classrooms are loaded with the Other. And yes, it’s not just Arabic. It’s black, it’s Latino, I’m a male and there’s female and the whole feminine energy stuff has always been interesting to me. I don’t just want to be a male; there’s something else going on there.

So, the book is going to be about how to integrate this Other stuff out there, being the privileged person I am. What has my life been like in terms of integrating this other?

As a writer, it has to work for me first. I have much sketching and some pieces that I have that can be used, but I still have a lot of work, and that’s exciting for me.

Well, I would say they both coincide. I will say that you should live your life as a free write. And I stress free write in all of my classes. Which is, rather than thinking you have to have everything all lined up, just get down everything you have in your head. And if you try too soon to figure out what you want or don’t want, you end up rejecting the good stuff or the good stuff lying around that we have yet to explore.

I would say in writing and in life, go beyond what you expect and your ordered existence. Explore your options and look at all the different experiences you can get.

Well, that’s a great one! I know something that I enjoyed with my colleagues is the Barrett Contest and that allowed me to do what I love to do which is reading student writing and talking about it with my colleagues, so that’s been a positive experience.

I’ve had so many situations with writers; young and old, black, white, Arabic, Latino, all across the board, who really genuinely I felt opened up in terms of their own writing, and they opened up not only in terms of their writing, they realized they have a story to tell. And I think I did a good job, most days, of making it feel comfortable for them to open up and that they can tell their story.

So, there have been countless and countless numbers of students who wrote some really powerful things, not because I say it but because they say it. They say it and they read it to their family and friends or even other writers in their class.

This is my 25th year here and I taught two years fresh out of college at a prep school in Massachusetts where, not only was I an 11th grade English teacher, I was also the first girls’ basketball coach.

Well, it was nice for the first game and then we lost sixteen games in a row. That hurt…

Then I went to grad school and I taught all through grad school. And then I came here. When I add it all up, it’s been more than thirty years of teaching, thousands of students.


Mr. Z!
Mr. Z?
Mr. Z from Chicopee, Massachusetts. I graduated from a little college called Amherst College and that summer I thought I was going to go to grad school immediately and then I had this internship, or as they called it, teaching apprenticeship with this man, Mr. Z, teaching 10th and 11th graders, mostly remedial stuff. They had situations in their high school which placed them in their high school’s summer program. And this guy, Mr. Z, is still the best teacher I’ve seen in the thirty years I’ve been teaching. He just loved what he did and he said he could just close his classroom and create this world, you know, and that’s what he did and I saw him do that. So I just sat back and went, “Ooh! You can do that?! You can just close your door and create a whole new world? Wow! I think I’d like to do that, the heck with grad school. I know how to read and write, I can do that anytime, but this is really interesting.” So, right after that, in the last couple of weeks in the summer, I sent out resumes to a lot of schools and ended up with this job in the prep school.

So, yeah, Mr. Z. I was just thinking about him the other day and he’s got to be what now, seventy five years old, still teaching and written a book on teaching. Yeah, he just loved what he did.


Wow. I have two kids, a seven year old and a nine year old, Lucy and Henry.
Henry’s birth, it’s kind of a cliché, I mean just to be present at a birth. I can’t imagine being a woman and being present at a birth and it was a challenging birth and we were able to do it without my wife, amazingly, not taking any drugs. But it was 25 hours of labor and you know, I was with her all the way and she was doing the hard work but I was there and it’s indescribable. I have never written explicitly about that but I wrote a poem soon after his birth and that is still…
Do you mean “Write On?” I made it easier for two reasons, first I think the textbook industry is a criminal, you know, and I think they should lock some of those people up for the price of textbooks they sell them at. I’ve never used a textbook in the thirty years of teaching, I never thought those were valuable for the way I was trying to teach. But I had to have something or I wanted to have something so I just stole from a lot of different places and some stuff I created myself but some stuff, as you can see, are scanned. I thought it was worth it.

Final thoughts, hmm? What’s coming back to me is back to the idea of story, I really like that. I like story, I like stories. I’m anxious to find out, clearly, what my story is, to write my story. And I really want to urge and assure students that they too have a story to tell. The world benefits from a well-told story, a well-told life story and it doesn’t have to be a 300-page book, it can be a three page piece. So, those pieces are important and when people hear them, they resonate with them and then they realize that it is partly my story, but only partly my story but here’s my story that came out of that story and then you hear another story and you think that’s partly my story too.