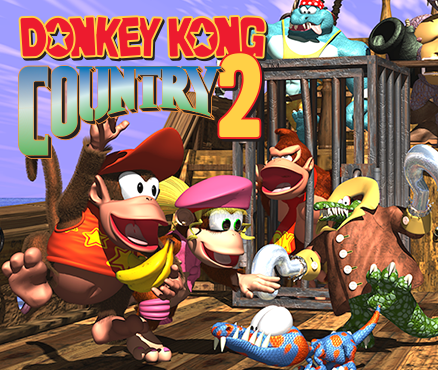 To celebrate my 25th entry of the Gamer’s Guide I’m going talk about Donkey Kong Country 2: Diddy’s Kong Quest, one of my favorite platformers of all time. DKC 2 was released in 1995 for the Super Nintendo by Rareware. The story is Donkey Kong gets kidnapped and is being ransomed for the entire banana horde. It’s up to his nephew Diddy Kong to rescue him instead. This plot is barely coherent but it’s forgivable because it came out in nineties and back then it was all about the gameplay. Thankfully this is something that DKC 2 excels very well at.

As a platformer this game retains the simplicity of the first one. You travel across several levels of varying theme to make it to the end, collecting bananas or finding secrets if you’re persistent. You face obstacles in the form of environmental hazards and dangerous enemies, with a tough boss waiting every five levels or so for a challenge. It’s pretty standard on the surface but this installment served a complete overhaul of the first game.

The unique tag team system returns here, where you control one Kong while the other idly follows from behind. If one Kong is damaged they will be defeated and the other Kong will take control. If your remaining lone Kong is damaged, you lose a life. The only way to recover one of your fallen characters is by finding a DK barrel and releasing them, which allows you take another hit again.

Each character has unique abilities. Diddy Kong is naturally faster, with a longer roll attack and better jumps overall. Dixie Kong, Diddy’s girlfriend, can spin her long hair like a helicopter which slows her fall and allows her to glide during her descent. When you have both characters you may switch control between them at any time, which lets you use their respective abilities at the best time. Added to this game is the team up move, where the idle Kong jumps on the main Kong’s shoulders. From this position you can throw the idle Kong in the air to grab hard to get items, reach higher platforms, or defeat enemies in a long range attack.

The level design is more dynamic this time around. While the first game stuck mostly to a left to right level progression this entry has you climbing up, descending, moving to the left and then right again. Animal buddies, non-hostile characters you can ride essentially as a power up, return in this game. This game lets you ride Rambi the rhinoceros, Enguarde the swordfish, Squawks the parrot, Rattly the rattlesnake and Squitter the spider. Each animal has an initial ability and a special ability. For example Rambi, a series favorite, is a powerhouse that can mow down enemies and his special ability allows him to charge forward and destroy certain walls to reveal secrets.

Hidden bonus stages have also been refined. The random mini games from the first DKC have been simplified to just three types: find the coin, collect the stars, or destroy all enemies. For completing them you are rewarded a Kremkoin, a collectible and specialized currency that can be spent on opening up levels in the Lost World (a hidden final world that some consider an early form of DLC).

DK coins are a rare collectible that are usually well hidden, with one for every level. This is purely optional for gamers who like finding everything. The Kong family returns here to help out as well, though there services now cost banana coins, an in game currency that is easily found in every level (I guess you can’t fight capitalism). Funky Kong lets you travel between worlds you’ve previously visited (airplane style), Crank Kong provides hints (and insults you), and Swanky Kong runs a trivia game show (with extra lives as the prize). Oddly enough save points in this game also cost money (2 coins per save, the first save per world is free), while doubling as a secondary hub for hints.

One of the most unique aspects this game has is the areas you explore. The first game was all about liberating your home island; this game puts you right in the heart of enemy territory. Here you’ll find yourself traveling through pirate ships, volcanic canyons, murky swamps, dangerous amusement parks, haunted forests, and a staggering climb through a fortress tower. This is just a sample of what you’ll encounter. Another thing I must mention is the music, which is among the best the SNES has to offer. I can’t even provide a good example in this review because the entire soundtrack is that good. Look it up on Youtube and decide for yourself.

There isn’t much more I can say about DKC 2. It’s one of the best platformers from its generation and holds up very well despite it being twenty years old. If you haven’t tried it yet, do so. For those of you have played it only you can understand why the words “brambles” and “wind” inspire fear.