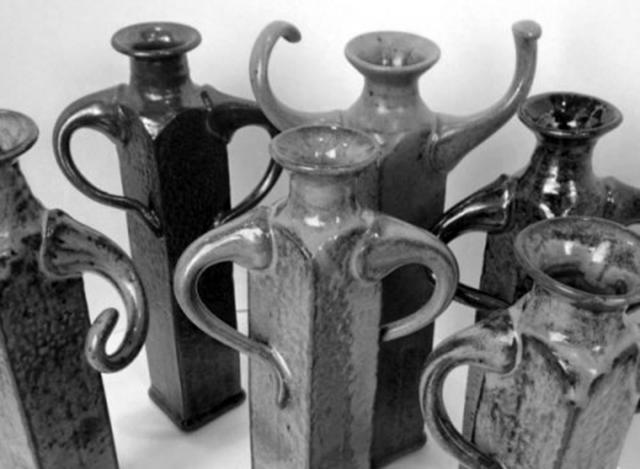 Hosted by the Ceramics Club, the event featured work from over three dozen potters, including HFC students, faculty, and local artists.

For students Erin Hoekzema and Nate Zrnich, pottery was originally not a part of their career plans.

“I took a class for fun and ended up falling in love with it” said Hoekzema.

Four years later, she now sells her work at various art fairs and has her own pottery business, titled Centripetal Designs. Hoekzema is known for her trademark table lanterns, with designs that resemble the warm glow of a candle.

Zrnich was interested in pursuing a career in music before enrolling in a ceramics class last winter, which he at first considered as a “blow-off class.”

“Halfway through the semester, I knew that this was something I wanted to do. So I dropped my music career and changed my major to ceramics. This is definitely going to be my career path.”

The boutique marked the first time Zrnich sold his body of work, which consisted of bowls and vases in various designs and shapes.

In Hoekzema’s corner, there were bright red, orange, and blue bowls on display, as well as rice bowls, and trays adorned in purple and blue designs.

Out of the many things to create, she enjoys making bowls the most.

“I like making big bowls with a nice curved shape. And then you can put a spiral swirl in the center of it.”

Zrnich on the other hand, likes shaping mugs.

“It’s a nice and simple design” Zrnich said. “You just make a cylinder, trim it into a unique little shape, and put some rings around it. Or you can tap the inside of it to give it a little curve. But you have to make it look good, though. You can’t just do that.”

Along with exhibiting the works of current HFC students, pottery of alumni were on display as well. One of those alumni was artist Joyce Ruby. Making pottery for over 50 years, Ruby uses the ceramics studio to make her creations each semester. But by the end of the current semester, the artist plans to retire from the craft.

“I’m going to be eighty in a couple of months and sitting at the wheel; your body has to deal with arthritis. I’m going to have to give it up.”

Ruby’s cups were featured at the boutique, with her signature drawings etched all along the outside. Her love for drawing is incorporated in each of her pieces she said.

The artist has had a fascination with art “for as long as she could remember.” As a child, she used to take the streetcar downtown to the Detroit Institute of Arts.

“It was like being in another world” she recalled. “It was wonderful.”

After attending HFC, Ruby transferred to the College of Creative Studies, where she studied drawing and painting. Later, she would go to the University of Michigan for art history. After college, Ruby became an art history teacher for many years at Redford High School.

While she will be putting ceramics behind her, the artist will continue to draw and paint. But she doesn’t want to take pottery completely out of the picture yet.

“It’s my happiness, it really is.”

The gallery had a variety of pottery on sale, including home goods and holiday pieces made of terracotta, porcelain, and stoneware (hfcc.edu/news). Prices ranged from only $4 to $78.

Prior to the official opening day, the gallery held an Early Bird Preview and Advance Sale. The $5 admission went towards the HFC Ceramics Scholarship Fund.