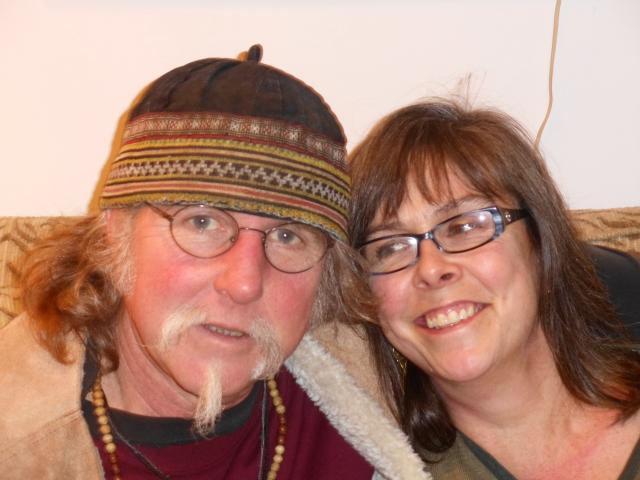 William Secrest, professor and head of the Religious Studies program at Henry Ford Community College, took the winter semester off from teaching to travel to the Middle East with his wife, Misty. The Secrests’ first stop was Beirut, Lebanon, and their itinerary includes visits to Syria, Jordan, Mount Sinai, Israel, Palestine and, finally, Turkey.

The entire trip will encompass approximately four months, bringing the Secrests back home near the end of April, and Bill will chronicle their travels via a series of “dispatches” that the Mirror News will publish each issue.

A few days ago I wandered into the 15th century Mosque of Emir Fakhreddine Maan in the lovely village of Deir Al-Qamar in the Chouf Mountains. Like the previous evening's rainy hike through the Cedar Forest Nature Reserve, the mosque offered a magical moment. I was pleased to settle down in the ancient sanctuary for a bit of meditation.

Six men were conversing awaiting “Asr,” mid-afternoon prayer. One of them glared at me. As I lowered my gaze, a lively conversation in Arabic ensued. I understood nothing, but realized that one person gradually assumed an authoritative voice. Suddenly and surprisingly, the dominant voice was addressing me directly. Looking up, I beheld a bearded, robed imam with warm, smiling eyes.

“Salaam w'aliekum,” I understood him to say as he touched his heart and extended his hand to shake mine.

“W'aliekum a'salaam,” I stuttered, smiling. Then, one by one, his fellow Muslims passed before me as if a reception line, big smiles and “salaams” all around. A great peace and happiness descended on me as the crew reassembled and began their formal salat (prayer).

As foreigners in Lebanon we are often greeted rather warily at first, but after exchanging welcoming smiles, we are made to feel at home. Beirut is one of the most cosmopolitan cities anywhere and Westerners are not unusual, but out in the hinterlands, in the mountains or in the souks of Tripoli, Sidon or Tyre, foreigners are scarce during the off-season. The Lebanese people of all stripes, and there are many, tend to be amongst the friendliest and most welcoming folks in the world, but they remain wary until the “salaam” is extended.

Two days ago we left our cozy room above the crashing surf of Tyre's shore to visit the sourthern village of Tibnine and Bint Jbayl, the homeland of so many of Dearborn's Lebanese community. Our hotelier had suggested we would need passes to go there, but at checkpoint after checkpoint, bored soldiers waved us through. The roads were lined with large banners displaying the faces of youthful martyrs alongside Ayatollah Homeini and Iranian President Amadinajad. The face of Hezbollah leader Hassan Nasrallah was everywhere, frequently offset with images of Jerusalem's Dome of the Rock and soldiers rushing into combat. A big placard at the center of Bint Jbayl welcomed all to the “center of the resistance.”

Every morning I read the Qur'an, and the other day's passage, Sura 2:216, reads in translation: “War (for just reasons) is prescribed for you, even though you dislike war. But you may dislike a thing that is good for you and you may love a thing that is bad for you. But Allah knows and you know not.” The war in south Lebanon addresses perceived injustices in Palestine, but in Bint Jbayl I certainly felt that religion was encouraging self-sacrifice in service of revenge and piety. Is the hatred being fostered the will of God?

At a restaurant the night before we inquired of a party of off-duty German UN soldiers whether it would be advisable for us to visit this southern region. They joked, “Sure, just don't let them know you're American.” So we didn't talk much as we strolled around Tibnine and gazed over the tranquil hills from the citadel atop the town. This saddened me, as these were my students’ people, students whose parents I taught 30 years ago when I first joined the HFCC faculty. Such sadness is the taste of war.

Driving out of Bint Jbayl further up into the hills, we passed a couple of shepherds watching over their flocks. Suddenly, we came to the end of the line—cement, barbed wire and parked tanks. The soldiers there were definitely not waving us through. The peace of the mountains and mosques was replaced by an icy chill deep down in the belly. Here was war interrupted. Houses and roads bombed out just four years ago have been largely rebuilt in a most impressive, even ostentatious manner, and so have the armaments of Hezbollah, said to include 40,000 Iranian missiles capable of striking deep into the heartland of Israel. Why rebuild everything only to have it bombed away in short order, together with fresh martyrs? Does even Allah know why?

And so here we are on our peace pilgrimage testing the waters of compassion. We are off to Syria in the morning, and then to Jordan and Egypt, whose government is toppling even as I write. On April 8th I hope to be speaking with HFCC directly via Skype at the “Religion, Conflict and Peace” conference to be held on campus that weekend. I will be with the young people of the Wahat Al Salaam/Neve Shalom peace village in Israel. This village has hosted Arabs and Jews living and learning and growing together in peace for 40 years as the world has been exploding around them. The conference is being co-sponsored by the “Charter for Compassion,” (Google this) which calls upon all “to restore compassion to the centre of morality and religion…to cultivate an informed empathy with the suffering of all human beings, even those regarded as enemies.”

Can this be done?

The “Holy Land” is God's flea market. Amazing finds are all around. In the space of a few short days we have seen where Abraham milked a cow, Jesus turned water into wine, and where John the Baptist's head may have ended up, as well as his father Zacharias' head, tucked away in another great mosque. Pilgrims abound. Religion sells big around here.

Today is the Prophet Mohammad's birthday. I wonder what he would think of the way religions are being traded here. They are bought and sold like souvenir trinkets, or like commodities on the stock exchange.

A few days ago we visited Deir Mar Musa, a church and monastery perched high on a cliff overlooking the wild and barren Syrian Desert. Founded by the son of an Abyssian king 1400 years ago, the church flourished for centuries tucked away in the heart of nowhere. It was abandoned in the 1830's as modernity dawned in this region. Thirty years ago it was rediscovered and reopened by a contemporary holy man. Now it serves as an ecumenical spiritual retreat for women and men of diverse faiths. Some, like us, visit for a few hours; others stay for days, years or an entire lifetime. While there, we encountered people from all over the world, from Chile to Korea, Europe to Africa, as well as from Syria. All were people of diverse faiths, drawn towards an open-ended spirituality.

Upon arriving, we walked up the steep winding path towards the church. A sign announced “Silence,” but people chatted in soft, friendly tones. We had climbed up with a young, first-year medical student from Aleppo. He said he was Muslim, but admitted to having questions. He intended to spend his semester break at the monastery. Another Syrian man, a Maronite Catholic, was heading back to his home in Latakia after living 10 years in the mountain retreat. After he had stowed his gear in a minibus and was heading out, he yelled back with a laugh that he hoped to have a girlfriend within 10 days! A guy he hugged fiercely before leaving told us he was just now becoming a monk. It would seem that the holy life here doesn't depend so much upon words and traditions as upon the quiet examination of one's life. Away from the noisy distractions of buying and selling, one becomes more alive.

Today the “Holy Land” is riven by war and made stupid by crass commercialism. Still, perhaps more than ever before, we need a holy land. The world teeters on the brink—food, water, the environment, even love itself all seem in short supply as we crowd together searching out fresh terms of engagement on our lonely planet. The “Holy Land” is a place where we can be whole, where we can come together across all of our boundaries, be they physical or cultural. This holy land isn't so much a place as a space…a matter of the heart. Everyone has the choice to love or hate; to choose life or death. This is an ancient and abiding choice. But just now, the choice is not so abstract….

Peace be with you,