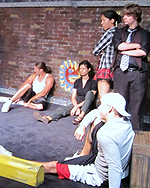 The actors’ energy coursed through the theatre’s intimate setting as they bravely portrayed edgy characters tortured by the realities of everyday life. Sex, violence, racism, and substance abuse were some of the issues touched on in this tragic drama written by Eric Bogosian. Bogosian, an accomplished author and actor, has written and performed for film, television, and stage.

While the play did not hold back in any way, Bogosian used all of the extremes of life to beg questions, such as “Who are you?” and “Where are you headed?”

Director Chris Bremer seemed very proud of the cast he assembled. In a recent interview on HFCC’s radio station, WHFR (whfr.fm), Bremer explained that the actors explored “the angst of what teens or twentysomethings feel” at this particular stage of their lives.

“A lot of young students don’t have the baggage of life experience to allow them to pick out or portray the emotion that’s going on, but they feel an emotion similar to that,” he said. Bremer said that it’s his job to help them recreate that on stage.

If one goes by the reactions from the audience, Bremer did just that. David Vileo, 18, said the surprise twists caught him off guard, but he enjoyed being on the edge of his seat.

Upcoming shows include Frances Hodgson Burnett’s The Secret Garden presented by HFCC’s Theatre for Young Audiences and William Shakespeare’s Romeo and Juliet presented by HFCC’s Fine Arts and Fitness Division. Auditions for The Secret Garden take place September 1 and 2, from 7 - 10 p.m. Auditions for Romeo and Juliet start December 7 and 8, from 7 - 10 p.m.